Patter and Kalmer: all hat, all battle

While superficially similar, there's a key difference between Bob Katter and Clive Palmer. Palmer, despite his buffoonery, is an experienced political mind. And Katter is just mad. 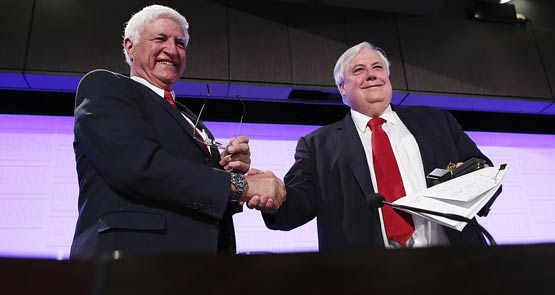 White hair. Red Ties. Ex-Nats. Queenslanders. Leaders of new political parties, PUP and KAP. Big men, as they say in the classics, with much to be big about. Clive Palmer and Bob Katter came to Canberra yesterday to debate, and after a while they appear to merge together, Patter and Kalmer, two men bringing the cray-cray, the colour, the movement to a banal election.

On the surface their pitch is similar, and it’s no wonder, as Katter said at one point, that they found it easy to do a preference swap. It’s the same  pitch as the Coalition’s: the country is on the scrapheap, a disaster area, facing an economic catastrophe, facing ruination. Only a different approach can save us.

I call this the “two Australias” pitch because it’s based on an attempt to convince voters that the Australia that appears to exist, the one with low unemployment, low inflation, rising productivity, a triple-A credit rating, an economy envied by policymakers and would-be migrants around the world, isn’t real, that the true Australia is a smoking ruin, devastated, if you’re the Coalition, by Labor; devastated, if you’re Bob Katter, by the economic orthodoxy embraced by both Labor and the Coalition since the 1980s; devastated, if you’re Clive Palmer, by Labor and the party Palmer so avidly supported with his considerable wealth up until his falling out with Queensland Premier Campbell Newman.

Katter’s shtick is well known. It all went wrong when we allowed manufacturing to decline, we allowed foreigners to come in and buy Australia up, when we failed to support agriculture. This is the politician who was a member of Joh Bjelke-Petersen’s cabinet but who claims to be inspired by Labor’s Ted Theodore and the Country Party’s John McEwen.

Katter’s mad as they come, but rather like Labor’s Doug Cameron, he has a cogent economic framework guiding him, albeit one that fell apart decades ago with the need to reform a protected, stagnating economy. With his views on the economy, women and gays, Katter will forever be a man who has stepped straight out of a time machine from the 1970s. He sees the decline in manufacturing, which has gone from employing nearly one in five Australian workers in the 1970s to around one in 11 or 12 now, and the decline in agriculture, which continues to shed workers, and thinks that’s the whole story; he never sees the burgeoning services sectors of the economy that employ millions of Australians, or doesn’t think they’re real jobs if he does.

And he picks his facts to suit his preferred narrative, a sin that of course he’s not exactly alone in doing. Australia’s about to become a net food importer, he insists in his speech. Later I challenge him on it, pointing out Australia’s net food exports actually increased between 2007 and 2011, but he prefers to ignore, or fails to hear, the word “net”, and insists food imports are growing much faster than food exports.

Katter’s party has been plagued by administrative and personnel problems; many of the people involved in its terrible Queensland election campaign last year have moved on to other parties. In any event, he never quite seemed to have whatever appeal Pauline Hanson had and, god knows, might yet still have. Katter appeals to the same base as Hanson, tapping into the resentment and disillusion of the losers from decades of economic reform: middle-aged and older people, blue-collar workers in industries under pressure like manufacturing and regional communities who don’t like how Australia has changed economically or socially since the 1980s and want to reverse it. But he lacks Hanson’s anti-charisma and isn’t xenophobic enough, or maybe Hanson’s base is dying off.

Palmer has a coherent framework as well, one centred on his own interests. Palmer has spent a lot of good money backing the conservative side of politics over the years, and he funded the creation of the Liberal National Party in Queensland. And then, wouldn’t you know it, when the LNP finally got elected, the ungrateful wretches turned on him. So Palmer decided to set up his own party instead, an action that incurred the wrath of News Corporation, which used to cheer him on but which now subjects him to forensic scrutiny. Palmer’s agenda is, despite his picking up the 2010 joke of referring to Tony Abbott as Tony Rabbit, more a traditional Liberal Party agenda, only with even less fiscal rigour and more zeroes. Thus, there’ll be tax cuts for everyone, Palmer promises, as well as a massive increase in pensions. Asylum seekers get more support than pensioners, he laments, perpetuating a claim in those bigoted email chains that do the rounds. I challenge him on it, noting the Combined Pensioners and Superannuants Association of NSW went to the trouble of issuing a media release to refute it. He then amends the claim to say the cost of detaining asylum seekers is greater per asylum seeker than what pensioners get. Palmer is certainly not anti-asylum seeker; he rivals the Greens in wanting to facilitate their arrival here.

But unlike Katter, Palmer has massive financial resources to draw upon. He is running a national advertising campaign, and his candidates include a number of former sportspeople to maximise name recognition. Any question to him about the realities of politics — which way would a successful Senate candidate lean, for example — gets short shrift from him, on the basis that he’s going to be prime minister.

The debate, as it turns out, features little in the way of exchanges, despite moderator Steve Lewis’ efforts to create some sparks. Both men are aiming at the major parties. They agree more often than they disagree. But, crucially, Palmer isn’t mad, not by any stretch of the imagination. He plays the fool, deliberately talks nonsense Bjelke-Petersen style and courts controversy, but an experienced political mind lurks beneath it all. And he has the money to indulge it.

“Patriotism is the last refuge of the scoundrel” or in this case “scoundrels”. ‘Titanic’ Palmer was on 2BL this AM sprouting his tea party lite solution to everything and I believe he has got the journo’s bluffed (not too hard really). I’ll bet none of his preferences go to the left, only to the LNP, so much for despising both sides. If the LNP wins they will be forever in his debt, and he will have sway over policies to look after him and his mates in mining, including CSG etc (which is probably de-riguer at any rate).
Poor Katter, he’s in an environmental sandwiche, trying to appeal to the right forces in the bush (read mining/CSG), whilst attemtpting to appeal to ever greener, ever more radical farming interests against CSG, and more allied to a Green agenda than a LNP agenda (not that they will vote for the Greens, human nature is a funny creature).

I missed the ‘Joh for PM’ sticker in the Sun all those years ago, but a mate of mine has one and drags it out to taunt me every now and then. I’ve fought back last year with a ‘Trump, Gingrich’ T-shirt but I’d better get cracking and find some Kalmer Patter stuff to put away for future amusement while it’s around. Anyone still got the Natural Law defence policy leaflet featuring the meditators ?

AndyB – I had fond hopes of getting a Palin/Bachmann tee-shirt/bumper sticker in 2011 before they flamed out.

Clive was on Lateline tonight, being rudely interviewed by Emma Alberici. Through it all, Clive maintained his usual jolly outlook. Very funny!
He might be wrong about a lot of things, but at least he is entertaining!! AND he seems to know where all the ‘bodies are buried’ on the conservative side of politics. Tony Rabbit needs to be very careful. Clive disclosed s few choice tidbits on one Mal Brough, who he is about to take legal action against. Will watch that little set-to with interest!