Fairfax grumbles. A few months ago, a Fairfax restructure set up a new unit called Australian Publishing Media (which includes the metropolitan mastheads, the Australian Financial Review Group and regional media). Ex-Fairfax Metro Media chief executive Jack Matthews left, and this new APM was handed to Allen Williams, who was the head of Fairfax’s New Zealand business (and before that, a Rural Press exec). We’re hearing some rumbles from within Fairfax that the new set-up is not working well, communication is not great, decisions are slow in coming, and several (possibly unnecessary?) committees have been set up. “Ask about morale — all-time rock bottom. People very much missing the visionary Jack Matthews,” one mole told us.

We put this to a Fairfax spokesperson, who said whimsically: “change is never easy, but it has to happen”. If you’re an insider, let us know more about what’s going on (and yes, you can stay anonymous).

Play it again, Sam. Loudmouth Sam Kekovich was the MC at a fancy lunch for the Sydney University Football Club on Friday ($250 a head, thanks). A tipster — dubbed “Disgusted Guest” — passed this on:

“Sam Kekovich’s remarks and particularly the closing remarks at the Sydney University Football Club Finals Lunch held at the Westin Hotel in Sydney yesterday were offensive to many Australians and distinguished guests in the room.”

So what did the lamb man say? Footy types can get in touch here.

Sayonara, subs. Friday’s tip regarding job losses at APN News & Media’s regional arm turned out to be on the money. The company is looking to cut 15 of the 100 stuff currently working at newspaper subbing hub Centro through redundancies — voluntary at first, then forced. It’s understood a number of employees have already taken APN up on the offer.

Candidate check. Interesting to learn that Liberal candidate for the bellweather seat of Eden-Monaro, Peter Hendy, was a cadet economist, “a director of the Australian Made, Australian Grown Campaign,” and spends plenty of time “ferrying his 17-year-old daughter — a karate black belt — to competitions”. We enjoyed his official candidate’s bio. Just one thing. Why didn’t he mention that he was chief of staff to then-defence minister Peter Reith during the time of the “children overboard” affair? Read a Senate committee report from the time here if you want to find out more.

As you might remember, claims from the Coalition that asylum seekers threw their children overboard (made just before the 2001 election) played well, and the Coalition was re-elected with an increased majority. Of course, the claims were not correct …

Now, Hendy is far from alone in cherry-picking the nice bits for his candidate’s bio. Almost everyone does it. But Crikey, with your help, would like to bring you a fuller picture of those who would run the country. If you’d like to remind us of any candidate’s record please email Tips.

Slogan assistance. Greens Senator Scott Ludlum (who may lose his seat) is campaigning under this slogan, as he instagrammed for us all today: 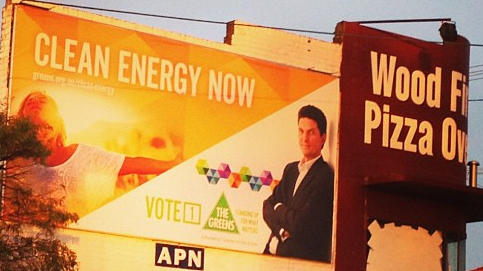 We liked this improvement on the slogan courtesy of @maxploitation on Twitter: “Great hair now”. Ludlum’s hair alone is worthy of some votes, surely. Tips pines for the days when First Dog on the Moon produced a bumper sticker proclaiming “I brake for Brendan Nelson’s hair”.