Everyone is talking about Tony Abbott's daughters as the economy gets lost in the shuffle.

Campaign reading. Daughters, daughters everywhere this morning, and Patricia Karvelas captured the spirit of the occasion in The Australian with her “Daughters give a daggy netball dad a boost“.

Once again it was the economics writers who seemed to me to get to the nub of what the Liberal policy speech was really about — or perhaps that should be what it was not about. Laura Tingle in the Financial Review believes “Abbott promises trust and little else” in his policy launch. Those promises of the Opposition Leader to have a surplus of 1% of GDP and defence spending of 2% within a decade are in contrast to the way “the federal political agenda has been driven for the past three decades by demands for detailed reform agendas, fiscal discipline and some clear vision of how to strive for an Australia transformed within one or two terms of government”.

“Buoyant Tony Abbott attempts the flip” is how The Guardian‘s Lenore Taylor saw the launch. “The flip”, a tactic of turning the tables on an opponent, of taking what has always been considered a weakness and turning it into a strength, is when Abbott, as Labor struggles to force him to reveal his policies, and more importantly, his policy costings, flipped the accusation of negativity levelled for so long against him. Now, he  alleges, it is the ALP that is running a negative campaign.

Kenneth Davidson in The Age gets depressed about the way the government on the back foot over its economic record — which he calls “outstanding when the global economic environment is taken into account.” And in “Smoke and mirrors with no policy on smoke“, Davidson nominates a culprit for Labor’s position:

“It is too late to explain the benefits of Keynesian policies in the middle of an election campaign. The damage was done by the former treasurer, Wayne Swan, who refused to explain that the task of economic management is to balance the economy, not the budget, and that when private spending collapses (such as in the GFC), either the government steps in to take up the slack by increasing spending and cutting taxes, or growth slumps and unemployment rises. As a consequence, the Coalition is having a field day selling fear, aided and abetted by the Murdoch press.”

But don’t think that’s the most depressing aspects of this election. Those, argues Davidson, are the failure of the major parties to develop a coherent policy to deal with climate change and their willingness to co-operate in squeezing the Greens out of the political process when the Greens are the only party prepared to confront the issue.

Ross Gittins in The Sydney Morning Herald also is on the depressed side as he sees “Checkmate spells fiscal indiscipline“:

“It’s truly ironic that after spending five years banging on about debt and deficit, and then proclaiming us to be in a budget emergency, the side most likely to form the next government has made one fiscally irresponsible commitment after another.

“It’s all part of the way the two sides’ long-running battle of the scare campaigns has morphed into a checkmate election campaign in which most effort has gone into eliminating the differences between the parties, leaving them with little to debate and voters with little choice other than which side to ‘trust’. What if you don’t trust either lot?”

The Age’s editor-at-large, Mark Baker, spent four days on the hustings with the prime ministerial hopeful to write of “The Abbott Evolution“, with Tony Abbott giving this advice about how to predict his future as prime minister:

“Lights out at the house of power“ — Tony Wright tells of the night Prime Minister Kevin Rudd failed to appear for his star billing at Brisbane’s Powerhouse for a debate with the Liberal opponent Bill Glasson in his seat of Griffith.

“Girl trouble: What is it about women politicians that turns the men into idiots“, asks Sarah Blake in Saturday’s Murdoch tabloids as she attempts to explain just how tough women need to be to last in the unashamed boys club that is Canberra.

Other views: blogs and tweets of note. No sign yet that the readers of the most read media web site are yet really engaged with election coverage.

Michaela McGuire takes us to the “Kissing Booth” at The Monthly’s blog as she observes Tony Abbott “offering up his lizard lips at campaign stops as a means of ensuring that his kisses receive more media coverage than his policy announcements”.

Campaign listening: News Radio ABC. “No nation shrank itself into greatness” was the one even half memorable line from Education Minister Bill Shorten when interviewed on breakfast radio by Marius Benson this morning. The rest of the commentary on Abbott’s policy launch was repetition of the now standard Labor Party taunt of cut, cut and cut.

A segment where one ABC journo (the hard-working Benson) interviewed another (Canberra bureau chief Greg Jennett) at least proved that at the national broadcaster they were as intrigued as the rest of the media by the performance of the political daughters.

Newspoll was the dominant subject of the morning, with pollster Martin O’Shannessy giving a succinct summary of his findings and the comment that the trend of polls before previous elections showed that Labor did not win campaigns. Only a cursory mention during the morning of a Morgan poll that was slightly more optimistic for the government than Newspoll.

The group of small business organisations endeavouring to get both parties to further their campaign to bring Coles and Woolies down a peg or two would be well pleased with News Radio, which took the bait cast by this full-page ad in the morning papers: 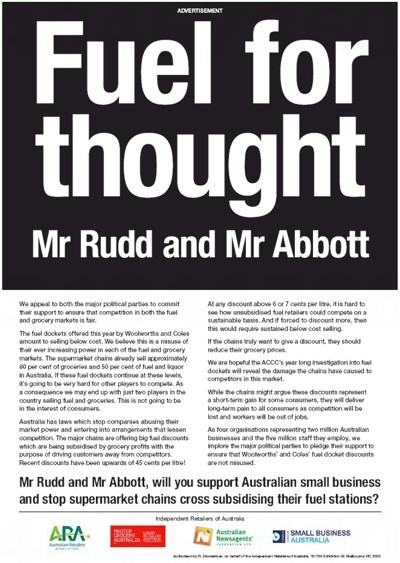 The nightly television news. Friday television: A hands-down victory for Abbott with his physical exercises at a military training camp in Darwin. Russia’s President Vladimir Putin would be proud of him. For the PM it was more meeting and greeting and the occasional heckling interspersed with well-wishing as he performed the now-popular political photo opportunity of a walk through a produce market.

Saturday: A day of little action. Greens had their moment on the screen for the lowest-rating night of the week. The PM had to contend with a confusing story about whether he did or did not let a television cooking show interfere with the performance of serious matters of state to do with Syria.

Sunday: The reason for the disappearance of those daughters I mentioned on Friday became apparent. It was nothing more than a clever ploy to increase the impact of them introducing the netball dad at his campaign opening. Their words might have been the closest things got to matters of substance but the Liberal launch overshadowed Rudd trying to look prime ministerial back in Canberra.

The daily election indicator and the appearance of an old faithful. It took a while, but on an otherwise poll-free Sunday The Age resorted to that old favourite — the taxi driver survey.

And so now we know that as September 7 draws closer, the main topic of conversation in Safi Ullah’s taxi is the economy, and close to two-thirds of his passengers say they have more faith in the Liberal Party’s ability to manage it.

The Crikey Election Indicator is pointing in the same direction. This morning Labor rated a 10% chance (down 2.5 points since Friday), the Coalition 90%. 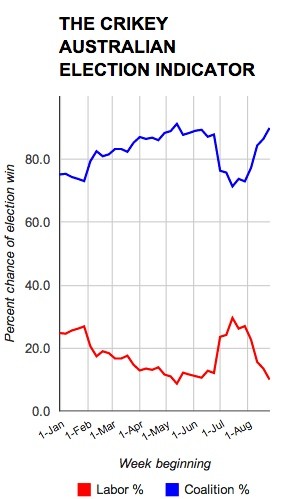 We’ve seen trust before – Howard did it to death.