Why does Malcolm Turnbull look weirdly photoshopped on a Liberal Party brochure? And will Seven's ratings grab pay off?

Abbott to the ABC: help get me across the line. Opposition Leader Tony Abbott fronted up for Radio National Breakfast this morning, the first time he’s agreed to talk on-air to Fran Kelly since July last year. Abbott — who has largely avoided the ABC in favour of FM and commercial radio interviews — sounded decidedly defensive early on. Especially when Kelly suggested his refusal to release costings for his paid parental leave scheme “just looks like trickery on your part or that you’ve got something to hide”. The Opposition Leader responded: “I think you’re making an accusation there rather than asking a question Fran.” The pair got into the groove after there, but Kelly wasn’t going to miss her chance to grill Abbott over his lengthy absence. “If you are elected prime minister, will you commit to come in and talk to our listeners more than once every 400 days?”

Abbott declined the commit to more frequent appearances — unless Kelly agreed to campaign for him on air. “Well, get me across the line, help me to become prime minister and then I think that would be a fair deal,” he said. The remark, of course, was a joke: Abbott wouldn’t seriously ask the ABC to campaign for either side of politics, would he? When Kelly pressed him on the point — “We can take you on trust there?” — he simply said “thanks very much” and scooted off. RN diehards, it seems, shouldn’t bank on Abbott become a regular presence on their favourite station if he becomes PM. — Matthew Knott

Turnbull marginalised? “Here I am as part of a team,” Opposition Leader Tony Abbott pretty much said during yesterday’s launch before an enormous backdrop of the Liberal party’s policy document cover, which showed the inner cabinet like cards in a poker hand. 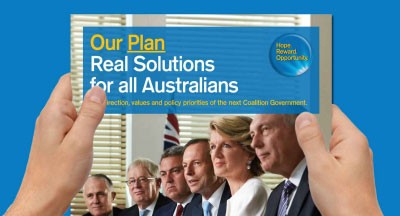 Only Malcolm Turnbull slightly skew whiff at the end, seemed out of the action. We couldn’t help but notice a resemblance between the cover, and The Onion parody of a US college showing its commitment to diversity by photoshopping a black kid into its prospectus cover: 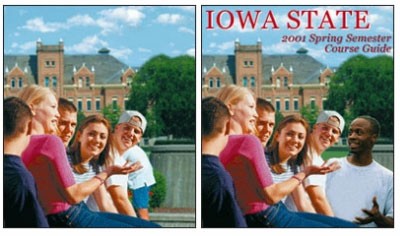 Well, at least he’s not being marginalised … — Guy Rundle

Standing up for Israel. Melbourne Ports Labor MP and staunch Israel defender Michael Danby has taken out a full-page election ad in The Australian Jewish News today. Lest anyone doubt his Israeli bona fides, Danby says Foreign Minister Bob Carr (though “well-read and enthusiastic”, a backhanded compliment if we’ve ever seen one) is wrong when he calls Israeli settlements in the West Bank “illegal”. In the ad, Danby calls Israel “our truly miraculous ally” and says Australia’s bond with Israel is “as solid as Jerusalem stone”.

Danby told Crikey this morning: “Bob Carr’s emphasis on Israeli settlements is ill timed, given the peace negotiations that are currently taking place in Washington. These talks commenced, and are supported by Australia, on the basis that they are undertaken without preconditions. One of the issues, and it is only one, of the issues being negotiated in Washington is settlements and land swaps. Obviously therefore Australia should not pre-empt negotiations freely entered into by the parties involved. With our membership at the Security Council, Australia should be emphasising the international investigation into the mass death by poison gas in Syria. In contrast, the negotiations are the only hopeful and peaceful element of the current turmoil of Middle East, including the mass slaughter that is taking place in Syria, Iraq, Lebanon and now Egypt.”

Danby says the issue is very important to part of his electorate.

You wanna know how he got these scars? Sydney’s “respectable” former broadsheet The Sydney Morning Herald has photoshopped an image of Prime Minister Kevin Rudd as Heath Ledger’s Joker, as portrayed in The Dark Knight. The odd illustration accompanies Paul Sheehan’s opinion column “Smile, you’re on candidate camera“, about Rudd’s numerous lies (including hiring an actress to appear as a battler in a campaign ad). 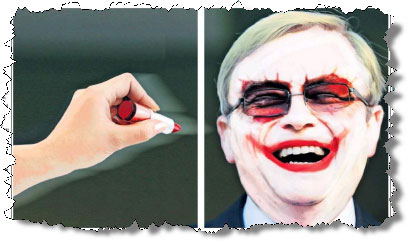 Girl wonder of the online world. Seventeen-year-old blogger Tavi Gevinson is the closest thing the Melbourne Writers Festival has to a rock star. The line to get into her talk at the Athenaeum Theatre on Friday night stretched the length of a city block, and there was a merch table stacked high with copies of the Rookie Yearbook — the best bits of her website laid out in physical form. Rookie (the magazine-style website spawned from the similarly named fashion blog she started at the age of 11) has an intensely devoted cult following among teenage girls and adults who still feel teenage on the inside.

Her talk on finding meaning in your life in being a “fangirl” — a very committed fan — of other people’s art was funny, insightful and beautifully delivered. Of course, she was speaking to a room of Gevinson fangirls, and while the questions from the audience were as shy and giggly as you’d expect, moderator Estelle Tang’s fangirling totally ruined her capacity to ask Gevinson questions of any substance. Still, the fans were thrilled to be within striking distance of their peer and hero. Rather than make the rock star exit befitting of her fame, Gevinson spent an hour autographing books and posing for fan photos. Well played. — Sophie Benjamin

Million-dollar ratings booster. One of the oldest tricks in TV is to throw money at a ratings problem. For example, Seven ran a million-dollar competition a week or so ago on Sunrise to help the audience remain to watch the first week of Sam Armytage’s co-hosting (replacing Mel Doyle). It worked, as Sunrise has won the past couple of weeks in metro markets, beating Nine’s Today.

This morning Seven has upped the ante by announcing a new quiz show called Million Dollar Minute, to be hosted by Grant Denyer (Slideshow). A timeslot hasn’t been mentioned yet, but the timeslot most in need of help is 5.30pm Monday to Friday, where Nine’s Hot Seat (Eddie McGuire, with a possible million-dollar prize each night) has been giving Seven’s Deal Or No Deal a hiding for 18 months or more.

The big factor in favour of 5.30pm for the new program is the way Hot Seat is delivering Nine’s 6pm news sometimes more than a million viewers a night, Monday to Friday. Then Nine’s news and A Current Affair flog Seven News and the fading Today Tonight. Running Million Dollar Minute at 5.30pm would boost Seven’s audience from then to 7pm and would also help Seven make its mind up about the future of Today Tonight. A successfulMillion Dollar Minute would in fact allow Seven to go to an hour-long news, with Today Tonight built into the last 20-25 minutes of the program. — Glenn Dyer

Correction of the day. The Australian today has apologised to former Labor MP Belinda Neal for claiming she had “stalked her husband’s mistress”. The Oz notes that Neal “approached and followed” the woman, but no stalking charges were actually laid.

Neal seems to have been the subject of a lot of bad press lately, as The Sydney Morning Herald apologised to Neal a few weeks ago for running a story saying she had punched deputy PM Anthony Albanese in their uni days. 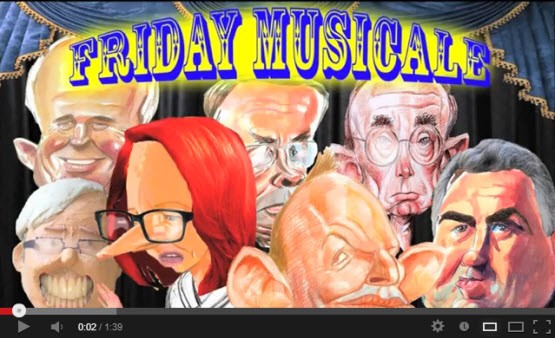 Palmer himself seems very taken with the video (which is a spoof), tweeting that the video was played at his campaign launch. 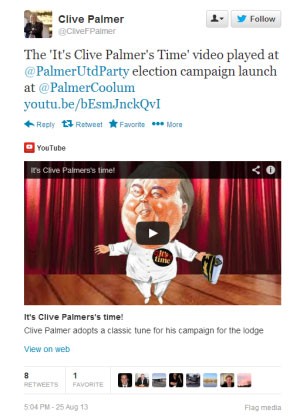 Abbott’s going to be so beholden to Murdoch – for services rendered – to pick up the phone every time he wants something, he won’t be able to get to the ABC near as much?

The headline says ‘Turnbull odd one out’.

He sure is, he’s the only intelligent and likeable member on their front bench.