On Chelsea Manning and missing the point

Stop getting distracted about how Chelsea Manning wants to live as a woman. She is a hero, a prisoner and a truth-teller -- and her gender should not become the story. 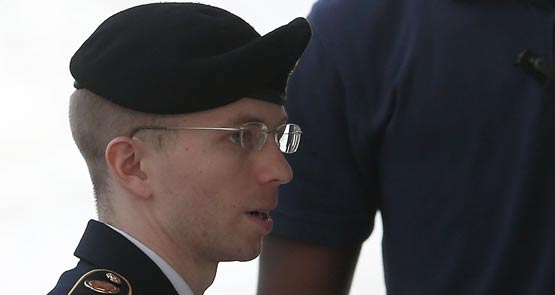 When Chelsea Manning disclosed that her gender identity had changed, there was a bustle in the kitchen of cupcake progressivism that had not been felt since, oh, I don’t know, morning tea time. In professional and social media, thousands declared their desire to utter the feminine pronoun as Manning had requested and rewrote their most compassionate sentences to include more “her” and “she”.

In one reading, this is a cultural moment of deep tolerance and an opportunity for the Western world to examine its prejudice toward those who would refuse traditional gender subjectivity. In another, please shut up.

Just for a minute. Shh. Seriously.

With the incarceration of Manning, we’re witnessing the withering of freedom, not to mention the withering of one woman’s freedom for 35 years in a stinking Kansas prison. Pronouns, gender and the dent to decency we call transphobia really don’t have a place in this discussion. At least, not a place of such central importance.

Let us make plain: it is not a bad thing to remind a broad audience that transgender people have a supremely rotten deal. In a popular post, Canadian artist Sophia Banks used the occasion to explain the social outcome of transphobia and its unpleasant cousin “cissexism”. While Banks’ tour of transgender life could fail to move only the least emotionally mobile, its emphasis should not, perhaps, be the most public emphasis.

But, in both “progressive” and “conservative” media, Manning’s story has become one of gender. While Fox and sundry twits continue to use hate-speech instead of analysis and unfold a “now he wants to be a she!!!!” line, liberal outlets embrace Manning with new ardour.

The Atlantic was one of many organisations to “call out” cissexism as it name-checked the news outlets who’d failed to respect Manning’s request to be referred to as a woman. At the Inquisitr, NBC and even at Slate, the first reflex of many editors was to upbraid other editors for their sluggishness in updating their style guides.

It is polite to use the pronouns persons select for themselves. But, it is, perhaps, not the time to talk about the good manners of liberals and, rather, turn our attention to the extraordinarily bad manners of the US military.

Manning has, by some accounts, been subject to torture conditions for what might be seen as her heroism and she has — and it is this plain fact that seems to have been overlooked by many on the liberal side of the discussion — been denied warrant to talk to press. Ergo, knowledge of her gender transition comes to us because the US military allows it.

This is not just evidence released after a verdict. This is evidence released coinstantaneous with a terrible verdict that should raise questions beyond “is our society tolerant of transgender people?”. This is a shiny distraction that appeases Right and Left.

While Manning is championed as a victim by liberals and decried as a nutbag by neocons, her heroism has become as secondary to the public understanding of her as it so long has been to the man who built his reputation on her bravery, Julian Assange.

Some analysts argue that because Mannning’s lawyer offered the news to press, this moment was one of dignity and free will. And not, somehow, choreographed like every moment of this assault on the foundations of liberty has been. Manning was forced to “come out” for her defence. And the US military couldn’t have been happier to release pictures of this transition.

Forgetting its Chomsky and preferring instead its prayer book of choice, the liberal inspirational chorus is so ardent in efforts toward performing conspicuously compassionate song, it is prepared to give even the US military a free pass. Suddenly, Manning is not a hacker held in unthinkable confinement but someone in the Ellen green room with “choice” to “come out”.

This choice is illusory; but it is something in which contemporary need to believe. But, in our eagerness to “respect the trans experience” we overlook the prisoner “experience”. In the sense that her most distinguishing characteristic has become her gender, Manning has quickly transitioned from male to female as far as media are concerned these past 24 hours. Her entire story is gender.

Manning is a hero. Manning’s story is not about gender and media style guides, but heroism.

Manning is a person who exchanged the possibility of freedom to show the world that it was not war that is being fought in our name but atrocity enacted.

Manning is a person whose imprisonment for half a lifetime tells us of the ethical failure of the world’s remaining superpower.

Manning is a person whose body — whatever its s-x — has rotted in neglect along with our freedoms.

And before you tell me “we can walk and chew gum at the same time,” please consider that fighting for our access to a document of mass-murder is a bit harder than “walking” and that changing ideas about gender that have developed over 4000 years is a bit more taxing than “chewing gum”.

No we can’t do both. This is one conversation. And for the sake of freedom, we need to give it our full attention now.

Given the way most of the world’s media has folded on information freedom, are you really surprised that they change the topic so readily?

Well focused at the end.