Rudd and Abbott's daughters have disappeared from the campaign trail, as media and voters alike hit a wall of election fatigue, writes Richard Farmer.

Campaign reading. If this election is all about the economy then it’s probably a good idea to know something about the recently appointed Treasurer. Troy Bramston in The Australian in “Boy from the ‘burbs” spends a day travelling with Chris Bowen and finds a man who’s calm, unflappable, “focused, whip-smart and understated”. An interesting read.

Graham Richardson’s “Rudd’s chance to gain on policy-hampered Abbott” in the Oz saw Wednesday night’s debate giving Kevin Rudd a real chance to recover the ground he lost during the first two weeks of the campaign.

On Wednesday night he opened the door ever so slightly to doing Tony Abbott some real damage on the question of where he would cut to get the budget under control or how much his policies would really cost. We will know soon whether Rudd can pry open that door all the way and regain those two precious points that Newspoll says the government has squandered.

“Abbott in mother of all policy battles” — Phillip Hudson in Melbourne’s Herald Sun points to talk of a post-election revolt on the Opposition Leader’s paid parental leave scheme by Coalition MPs.

“If Abbott wins the election he will need to get it through the Senate, where the Greens may hold the vital numbers. Just like the Democrats took the rough edges off Howard’s GST after the 1998 election, the Greens will probably support Abbott on the condition he lowers the maximum payout to $50,000 and restores the tax break on shares. Fancy that. Abbott might have to rely on the political party he says is the most extreme to pass a popular policy his own supporters say is equally extreme.”

Hardly a day goes by without some media outlet somewhere reporting the findings of some pollster or other on voting intention in some electorate in some state and sometimes nationwide. And very confusing it all is with the results wildly different and impossible to reconcile. Tim Colebatch, the Age’s economic editor, in “Can we believe the polls? Robopollsters are showing strange results” warns us against even trying.

“If you believe the opinion polls, there must be two elections going on. One is the Federal election, where the established pollsters agree that the Coalition has established a small but growing lead, averaging 52-48 on their latest polls. That’s a swing of 2%.

“The second election seems to be taking place in individual seats. It’s brought to us by the new kids on the block, the robo-pollsters, who use automated phone calls to bombard us with surveys that report huge swings to the Coalition.”

“The established pollsters and the robopollsters can’t both be right. Someone will be left looking pretty silly on election night.”

Other views: blogs and tweets of note. The Finance Minister proves all politics is local.

And the opposition spokesman on finance does too.

Pictures of the week and the disappearing daughters. The Abbott daughters were out of sight, but dad dominated when it came to babies and children. Kevin was back in the fluoro, once with a matching hard hat. Both wives made cameo appearances. 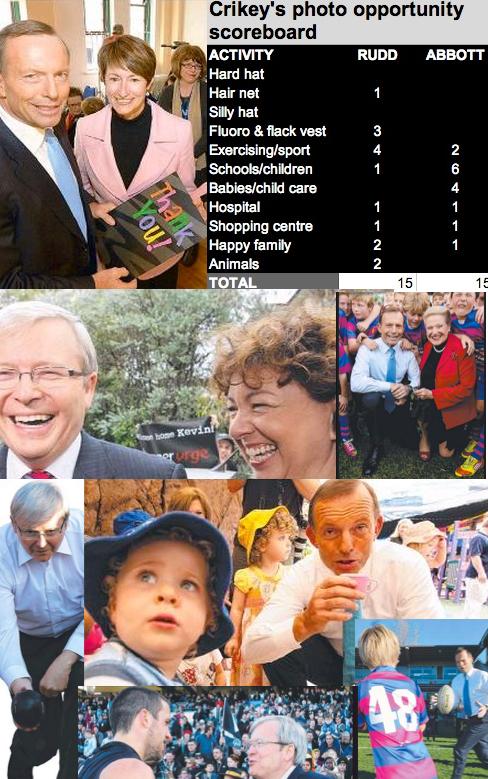 Campaign listening: 6PR 882 Perth. Steve Mills, or maybe it was his offsider, was worried that he had poisoned a friend’s lawn by applying a weed killing spray designed for use on buffalo seed lawns rather than the one recommended for couch so maybe he was just tense and bad-tempered when he interviewed opposition immigration spokesperson Scott Morrison. Whatever the reason, he gave Morrison a hard time about new plans for Australia to buy up the boats in Indonesia that people smugglers need to transport their human cargo.

Quite a lively exchange between the pair but because some weeks ago I suggested in these bites just such a policy, I, for once, was on Scott’s side. A quick poll of listeners asking them “should we buy the boats to stop them coming down?” The verdict of 33% Yes and 67% No showed me as well and truly in the minority. At least there was a little compensation when the Morrison plan did not win the breakfast radio program’s bullshit artist of the week title. That went to a state Liberal government minister.

The nightly television news. If the Prime Minister is as bad tempered and irritable as the print journalists would have us believe then he is a very good actor when a television camera is handy. He still looked to me like a man showing some grace under the pressure of a succession of opinion polls showing him as heading to defeat. Tony Abbott at his hospital based health launch looked as controlled as ever.

The daily election indicator. Labor 12.5% on the Crikey indicator with the Coalition at 87.5%. Labor down 0.6 points on the day and 1.3 points on the week.