Election Leaflets had planned to send its own leaflets encouraging people to election material, but a stuff-up with the delivery has scuppered the plan, writes journalist El Gibbs.

A letterbox drop from a website archiving election propaganda — and campaigning against letterbox drops — has been, well, dropped after a delivery company refused to distribute the flyer.

Election Leaflets, a project of the OpenAustralia Foundation, planned to send out its own leaflet, as it did in 2010, to a group of electorates not yet featured on its website. The flier, featuring Crikey‘s own First Dog on the Moon, encouraged people to submit election material to the online database … “We had done this in 2010 and had a great response, so this year we were planning to expand into a whole lot of new electorates. First Dog was generous enough to do a great cartoon, and we were ready to go,” said Matthew Landauer from Election Leaflets.

“Over the last week, though, we started to get the run-around from the distribution company and different reasons why there was a hold-up in the delivery.”

Delivery company Salmat told Landauer approval of the flyer was “pending with management”. When queried, Salmat responded yesterday that “we cannot proceed with your booking, based on the current artwork you have supplied”. Further enquiries produced the excuse that the flier was against terms and conditions (they weren’t told what those terms and conditions are).

“I just don’t understand how the First Dog cartoon could possibly be why they’ve refused to deliver our flyer! And now this means that we can’t get them out in time to the electorates we were keen to reach — particularly those in regional areas,” Landauer said. “The whole point of Election Leaflets is to improve transparency during the campaign and empowering people to do something useful with the flyers in their letterboxes.”

Several attempts were made to ask Salmat for an explanation, but no response was available by deadline.

*Disclosure: El Gibbs has worked with the OpenAustralia Foundation

It’s not all junk mail — election leaflets archived for posterity 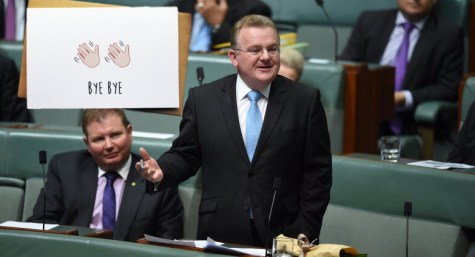 Exclusive Brethren step out from the shadows. Again

I for one, welcome our new Salmat overlords.
Anyone who would save innocent households from being bombarded with *vicious* anti-wombat propaganda, is a hero in my book.

There’s obviously a hidden s@tanic message in those three frames. Even when the masses aren’t permitted to lay eyes on one of his cartoons, Firsty still manages to generate humour.

Such is the power of The Dog.

I can’t find anything politically-biased about the cartoon used. Maybe Salmat was afraid that pamphlets moving online would affect their business…

Checked for apostrophe issues; not that.

Aha ! Got it, he’s missed the ‘r’ in ARGGHHH (again). All should be sweetness and light with Salmat when that’s fixed up.