Are right-wing micro-parties merely dummies to funnel votes to each other? Crikey catches them out breaching electoral laws. Now the AEC is investigating.

A swag of right-wing micro-parties running Senate and House of Representatives candidates at the forthcoming federal election have been exposed as being controlled by the same cabal of fringe-dwelling acolytes. 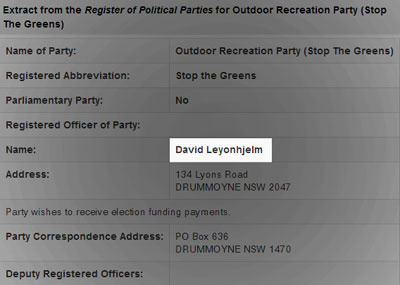 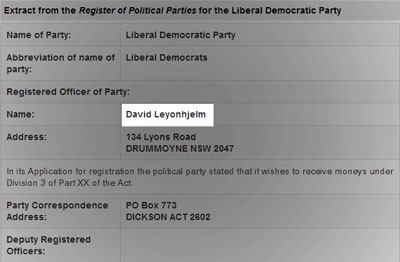 Nicole Beiger, the registered officer for the Smokers Rights Party, is a former LDP candidate … 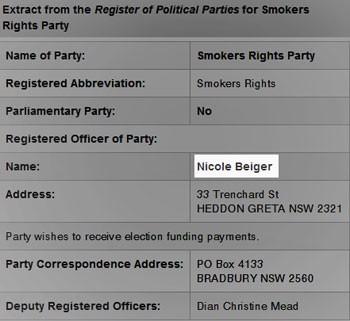 Crikey understands Leyonhjelm was also handling preferences for The Republican Party of Australia, whose registered officer is Peter Consandine. Leyonhjelm could not be contacted this morning.

A quick IP look-up of the Outdoor Recreation Party’s website shows that Leyonhjelm purchased the website domain in January 2012. Stop the Greens, the Republican Party and Smokers Rights were only registered with the AEC in July … 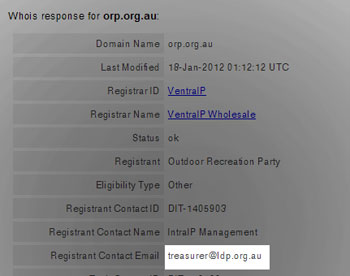 The four libertarian pillars take a critical view of government intervention and advocate rolling back regulation to let the market rip in the manner of US Republican Ron Paul. Because they preference each other, the set-up is likely to lead to allegations that they have been set-up as “dummy” or front candidates to funnel votes. Without substantial online research, the average voter would not be aware of the links.

On Facebook this week, Leyonhjelm admitted he oversaw the four groups, explaining the failure to lodge a group voting ticket was because “there is about 18 hours between the draw and submission of GVTs. There were GVTs for four parties to submit in each state and the task just overwhelmed us.” 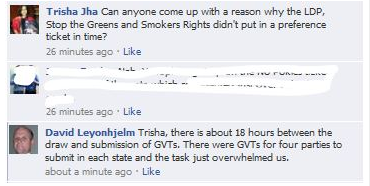 In Victoria the S-x Party was expected to benefit from a deal with the group, but all four failed to lodge Senate Group Voting Tickets before the midday deadline on Saturday (One Nation also failed to lodge). On the ABC’s World Today program on Monday, S-x Party co-ordinator Robbie Swan said at “the end of the day, we did all the preferencing, we held to our end of the deal with the LDP. However, when it came time, the LDP failed to lodge in Victoria and so did the other parties that they controlled.”

The S-x Party’s Victorian Senate candidate, Fiona Patten, confirmed this morning that the balls-up “puts us in a really invidious position. In NSW, where we’re not as strong a contender all our preferences will go to the LDP, but in Victoria, where we are a strong contender the LDP has dudded us completely — they’ve partly stripped us of support.”

Australian Electoral Commission spokesperson Phil Diak told Crikey this morning that there were currently no technical barriers in the Electoral Act to the same registered officer or agent acting for more than one party. But under Section 126 of the act, if Leyonhjelm were to become a federal MP, the practice would be prohibited.

And Diak explains there are further hurdles: “This does not impact a further requirement in the act, that to apply to federally register a parliamentary party (one that does not have a current member or senator sitting in the federal parliament), that the party, among a range of other requirements, must have 500 members who are all on the electoral roll. The 500 must also be unique to the political party concerned and can’t be resubmitted as a part of an application to register another political party.”

Party registration costs $500, and nominations are $2000 for each Senate candidate and $1000 for each House of Representatives candidate. However, the substantial fees do not seem to have dissuaded a record number of candidates from throwing their hats in the ring.

Another name to investigate is Glenn Druery.

It’s widespread, at least in Queensland with 8 Right wing candidates running in may seats.
Clive Palmer’s PUP candidates are sending their preferences to Coalition candidates around Australia, despite Palmer loudly complaining how undemocratic the LNP is, and how dishonourable the Hon Mal Brough is.
Call me cynical, but it looks as if Palmer is offering up PUP candidates for a protest vote, then directing them back to the Coalition.
The fact that his massive coal mine was recently approved by the LNP in Queensland is entirely coincidental, I am sure.
Just as Tony Abbott’s promise to abolish the Mining Super Profits Tax is completely coincidental,and would not interest Clive one iota.
And just as Tony Abbott’s promise to scrap measures to reduce Carbon Emissions, which could impact on the profitably of people who sell coal, is completely coincidental.

Its funny how when conservative groups act as vote funnels, its always a conspiracy… When left parties do it, its either unremarked or just signs of a “robust democracy.’

What about The Bullet Train for Australia? Who are they, why do they exist other than to direct votes (of train buffs?) to the Greens? Personally, I do like trains, and would love to see a bullet train thundering overhead through Marrickville at 320kph. It would give the Greens candidate in Grayndler something else to oppose.

Have you actually looked at the Bullet Train For Australia preferences? In NSW they preference the likes of Australia First, Family First, No Carbon Tax, Shooters & Fishers, LDP, CDP, Katter’s Party, Palmers’s Party and a bunch of others before the Greens. If they exist to funnel preferences to the Greens they’re doing a pretty bad job at it.

Hey Russell, Bullet Train for Australia is asking all supporters to vote for a Bullet Train then as they normally would. With 18 candidates in VIC, NSW and the ACT in both the senate and house of reps voters will be able to do exactly that. A train needs a left and a right track to stay on the tracks and that’s exactly how the party is aligned, straight down the middle.