On the road (again!) with Ley, planes and plains for a rural MP

You've got love being on the road in an electorate as vast as Farrer - and understand the different scale of what government do in small communities. 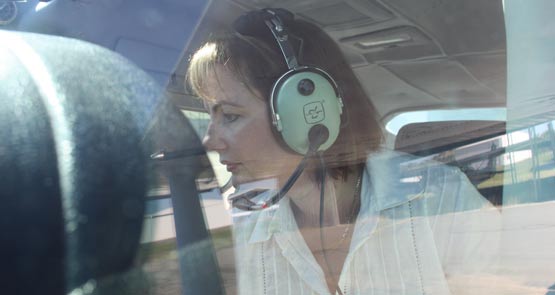 You don’t hear much of Louis Mountbatten these days, but he’s not forgotten at Deniliquin RSL. Past the small artillery pieces in the foyer and up a flight of stairs, there’s a “Mountbatten Room”, complete with 1st Earl Mountbatten of Burma’s picture behind the bar. But the bar is empty and closed; it’s barely 9.30 in the morning, and about a dozen Deni business people have come to have a round table with their local member, Liberal Sussan Ley.

By Ley’s standards, the two-plus-hour drive from Albury we’ve just undertaken is neither here nor there in an electorate that, since she took it off the Nationals in 2001, has expanded to nearly a quarter of a million kilometres in size. It now runs from Albury west to the South Australian border and up western NSW to Queensland. Ley, a pilot, tends to fly herself if the road trip is going to be more than a couple of hours, especially to Broken Hill, 900 kilometres from Albury, where she’s based.

When I last visited in the 2010 campaign, Ley was a backbencher; she’s now opposition spokeswoman for employment participation, childcare and early childhood learning, which further complicates the travel. Thus, tomorrow she’s flying to Broken Hill with a couple of stops along the way to meet locals. From Broken Hill, she’s making a late-night drive south to Wentworth, down near the Victorian border, three hours away. From there, a lightning dash to Canberra to speak at a conference her senior shadow, Christopher Pyne, is unable to make it to, via flights from Mildura to Melbourne to Canberra. Then she’s getting almost the next flight back to Melbourne, then to Mildura and back to Wentworth (the Wentworth Show is on this weekend), before returning up the Silver City Highway to Broken Hill to collect her plane to fly herself back to Albury. One foggy morning could throw the whole itinerary out.

Ley has an office in Broken Hill, visits every six to eight weeks and has already been once since the campaign started, hoping to get her vote up over 50% there, a remarkable achievement for a town with Broken Hill’s history. She later says she dropped into Silverton, up the road from Broken Hill, to check out the Mad Max Museum. You’ve got to love highway driving to be a politician here, and it’s not revealing anything too damning to suggest Ley’s interest in Max’s V8 Interceptor isn’t just for political show. She does, however, currently have all her demerit points intact.

Back in Deni, Ley is listening to the locals rather than in campaigning mode. In 2010 she was up against a popular ex-Nat local independent based in Deni, and fared comparatively poorly in the town by her standards. The town itself is a collection of mixed signals. The surrounding country is green and lush; a real estate agent complains of not having any rental properties, compared with high levels of vacancies in recent years. Another business person talks of the growing tourism coming through and the pressures for seven-day-a-week hospitality operations versus penalty rates.

But the usual evidence of rural decline can be found if you look for it: shuttered shops, the lots in the middle of town that lie empty, the lawn tennis courts that sit overgrown. “It’s quiet,” retailers say when Ley later doorknocks some shops. A local IT provider complains of the impact of GST-free online purchasing. No one’s building new houses, the estate agent complains. The Murray-Darling Basin Plan is no longer the hot-button issue it was, but it remains a constant source of concern in a region heavily dependent on irrigation — although flooding is the greater concern currently than losing water. A businessman who owns a grain-cleaning firm complains of the cost of fuel, saying if it can’t go down; he wants it stable so he can plan better. Ley is quick to point out the Coalition will be scrapping the carbon price, a handy response that covers a multitude of economic questions.

“This is the nitty gritty of Ley’s job and the job of any regional or rural MP … Places where even a small amount of government money make a huge difference.”

It’s hard to get a reading on how healthy the local economy is, though, when some locals complain about the threat of foreign investment, which disturbs more than one of the business people gathered in the Mountbatten Room. That night at the candidate debate in Albury, an audience member expresses concern about Chinese firms buying up property and then destroying the farm infrastructure and leaving the property idle — a bizarre claim outside even the tinfoil-wearer conspiracies of the Nationals. But it’s grist to the mill for the apparently permanently infuriated Katter Party candidate, former shire councillor Ken Trewin, who starts thumping the table at the debate during his opening statement and basically goes from there, especially when the vexed issue of water comes up. Next to him, the Palmer Party candidate looks positively chilled.

Ley backs foreign investment and knows some communities in the electorate that are crying out for it. She points out that the Coalition wants to have a better register of foreign acquisitions, but as she says privately, it is hard to make a succinct case for foreign investment in the face of “buy-back-the-farm sentiment”. Other, more rankly bigoted, sentiments emerge at the debate, not from the audience, but from the Rise Up Australia Party’s Narelle Davis, who launches into a tirade against Muslims in her opening statement. Trewin joins in, complaining that such issues can no longer be discussed. Ley, who grew up in the Middle East, has been deputy chair of the Parliamentary Friends of Palestine and knows what it’s like to get a face-full of Israeli teargas from study tours to Palestine, slams them, pointing out there are extremists in all religions and that the Muslims she’s met just want to practice their religion in peace — “and it is a religion of peace”, she says pointedly.

It’s not all the, ahem, glitz and the glamour of campaigning. In Deni, after buying some footwear in a skate shop — an occupational hazard of doorknocking retailers (I picked up a black beanie) — Ley meets with Interreach, a community service provider that wants to know how Commonwealth service tender processes can be adjusted to distinguish between locally based providers, which generate ongoing economic activity in regional towns, and larger providers based in cities, which send in staff. Ley, who was a Tax Office manager (among many other things) before politics, has to walk the line between saying she wants to pursue the issue if the Libs are in government and explaining that politicians can’t interfere in tender processes, only help set the parameters. Then it’s off to Finley, half an hour down the road — the dense fog that lay like a quilt over the flat Riverina landscape has finally burnt off — to meet a new network of local service providers that’s been set up in the region.

This is the nitty gritty of Ley’s job and the job of any regional or rural MP — government and government-funded services in small communities more socially and economically fragile than even relatively small cities like Albury, towns where access to something as simple as counselling can have a big impact, as can a locally based service provider that keeps employing people and buying motor vehicles through a drought when everyone else is doing it tough. Places where even a small amount of government money make a huge difference.

Later I try to steer Ley onto life as a minister in an Abbott government. Nothing doing — she’ll worry about that after election night. In the meantime, it’s all about clocking up the kilometres, in the air and on the road.

The electorate “has expanded to nearly a quarter of a million kilometres in size.”

Is that square kilometres, or does Sussan Lay’s electorate stretch half a dozen times around the earth? That would make it a BIG electorate.