The market finished down yesterday, with the Aussie dollar remaining steady. 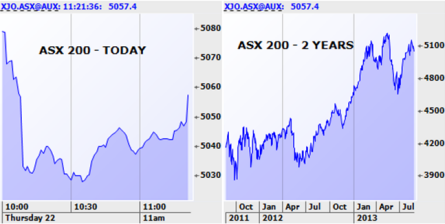 The bond markets sold off in anticipation of the FOMC Minutes and the selling accelerated after their release. Although they didn’t add much to the rhetoric tapering is becoming inevitable as the minutes broadly supported the previously stated timetable of ending QE by mid next year. The debate now is “How quickly”.

The weekly MBA Mortgage Index fell 4.6% in the US overnight — the thirteenth fall in the last fifteen readings — it fell 4.7% last week. On the flip side July existing home sales rose 6.5% to 5.39m, up from a downwardly revised 5.06m (from 5.08m) in June and now at the highest level since November 2009.

The US$ jumped on the minutes — The A$ is under 90c at 89.80c and down from $92.34c on Monday as US bond yields rise and Australian official rates heads in the other direction. The lowest the A$ has been in recent history is 88.48c on 5th August.

BHP was down 3.26% having fallen 2.05% in the US yesterday post their results after the close on Tuesday which missed expectations. The stock closed in the US down 40c on the closer here last night. RIO down 2.81% in the US.

Metals down with Nickel the worst down 2.28% as the US$ rises.