Melbourne's Herald Sun has replaced a misidentified photo of a shooting suspect on its front page with a new one, hoping no one would spot the difference. We did.

Fairfax, Seven West post financial results. Fairfax Media made a loss of $16.4 million over the past financial year, an improvement on last year’s $2.7 billion loss. The result was achieved largely through asset sell-offs and a savings drive, with group revenue declining by 9.1% on a like-for-like basis. The company posted $444 million in write-downs from its regional, printing and agricultural business.

The results show wildly divergent results across Fairfax’s different divisions. Digital revenues for property site Domain were up 16% year-on-year, while radio revenues grew by 8%. But revenues for the metropolitan media division (housing Fairfax’s print assets) fell by 9% and regional revenues were down 7.5%. Earnings for the metropolitan media division, excluding significant items, fell by 20.9% and 16.6% for regional media over the year. Earnings for the Financial Review Group dropped by 25.6% to 4.5 million. The company achieved cost savings of $193 million over the year.

Despite dwindling circulation for hard-copy newspapers, Fairfax’s declining print revenues were due to collapsing advertising revenues not falling sales. Print advertising revenue slumped by 24.9% over the past year and only increased by 3.4% for digital. Circulation revenue actually grew by 7.1% following cover price rises and the slashing of unprofitable sales. Fairfax revealed today it has 68,000 paid digital subscribers and 98,000 bundled print and digital subscribers – a result the company says is above target.

Hun, is he black or white? Yesterday we pointed out that The Daily Telegraph had run a photo of the same suspect twice in its story about the alleged murder of Australian baseball player Christopher Lane in the US. The caption incorrectly identified James Edwards (who is black) as Michael Jones (who is white), running two photographs of Edwards and none of Jones. News Corp stablemate Herald Sun ran the same misidentified photo as a splash on its front page yesterday: 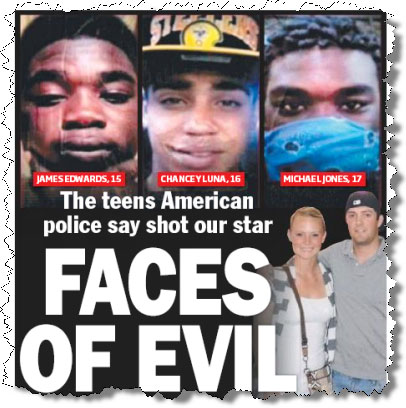 Today’s Hun ran a double-page spread on pages six and seven on the murder and ran the correct photos of the three suspects. But no mention was made of yesterday’s error. Does the paper think no one would notice that one of yesterday’s black suspects is white today?

In today’s edition the Tele ran a correction, noting that in the fast-paced world of breaking news, mistakes happen. 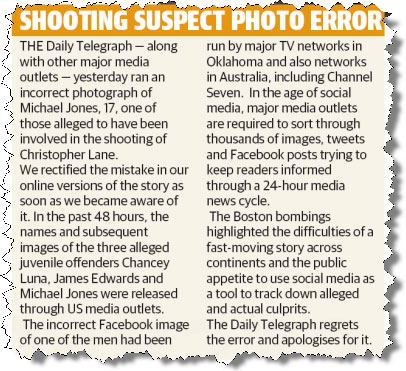 Now and then, an error. Monash University is promoting the “brilliance” of its double degrees via a series of bus shelter ads throughout Melbourne. We ask: what’s more brilliant than a Monash degree? Someone who knows the difference between then and than. 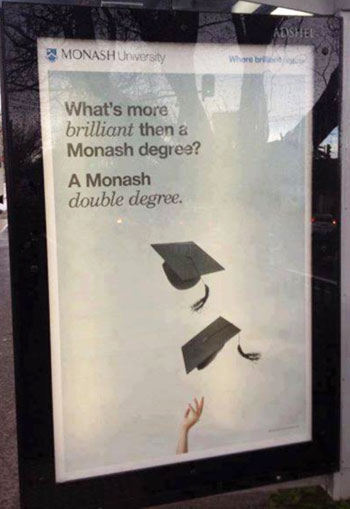 Crikey saving the world. You may remember yesterday’s editorial, in which we called on the US government to consider reducing its military aid to Egypt in light of recent deadly protests. We were very glad to read today that the US is indeed considering cutting Egyptian aid. We are sure President Barack Obama got the idea from us.

Front page of the day. The Courier-Mail is wearing its politics on its front page, with an ostensible news story on last night’s leaders’ debate in Brisbane an undisguised Rudd beat-up … 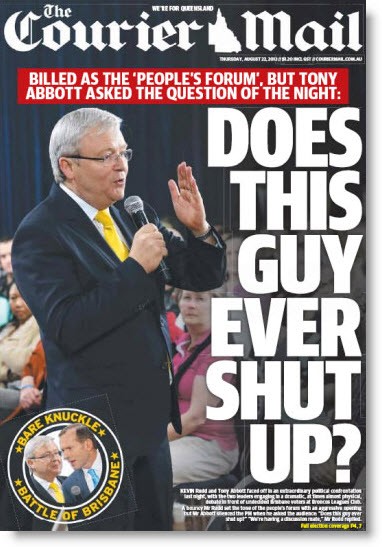 News Ltd have form regarding racial issues as per this judgement in 2006 relating to an IR case in the NSW Supreme Court involving staff at Holt St headquarters in Sydney, per Adams J:

“[1] The plaintiff’s principal place of work was at the News’ premises in Holt Street, Surry Hills. By virtue of the arrangements between Group 4 and News, the plaintiff worked under the direction of a Mr Chaloner, who was News’ Security and Fire Manager. In general terms, the plaintiff’s case is that Mr Chaloner so grossly misbehaved towards him that he suffered serious psychiatric injury, namely post-traumatic stress disorder and major depression. …[167] Mr Paine said that News had a very clear anti-discrimination policy for decades which, in particular, was in place whilst the plaintiff was employed there. He said that, had he become aware that Mr Chaloner had used racist slurs or made racist comments to the plaintiff, he would have been “extremely angry” and “moved to have the matter investigated and, whoever it is, whether Lance Chaloner or whoever, dismissed from our employment: it’s just not acceptable”. ” in Naidu v Group 4 Securitas Pty Ltd & Anor [2005] NSWSC 618 at http://www.austlii.edu.au/au/cases/nsw/NSWSC/2005/618.html