Bernard Keane, Crikey Canberra correspondent: Prime Minister Kevin Rudd a clear winner, for once: three days on from its announcement, Opposition Leader Tony Abbott’s paid parental leave (PPL) scheme continues to dominate election discussion, and the angle that emerged yesterday — retirees being slugged via the cut in franking credits — was painful. That was before Rudd won last night’s debate, which was far superior in format to the waste of time of 10 days ago. As for Abbott’s “does this guy ever shut up” line, it only adds to the lingering impression that stretches back to the 2007 campaign that Abbott doesn’t cope at all well with pressure.

Richard Farmer, Crikey election analyst: I was bemused at the commentary comparing Kevin Rudd’s recent performance to that of former pollie John Hewson. The only thing Rudd this week had in common with Hewson was that both were speaking outdoors. Hewson ranted and raved; Rudd showed a bit of passion, but his enthusiasm did not extend to shouting. Rudd’s campaigning repertoire leading up to his evening debate was extended as he mingled, tie-less, sausage in hand. Abbott stuck to his tried-and-true routine of a factory visit and a press conference. A winning day for Rudd without even needing a competent debating performance.

Norman Abjorensen, visiting fellow at the ANU and former Liberal speechwriter: If the so-called People’s Forum in Brisbane was the political event of the day, as fatuous as it was, it served to highlight public uneasiness about the Coalition’s budget cuts and effectively turned the spotlight on Abbott to provide more detail. By default, it went to Labor.

Nick Economou, senior lecturer in the School of Political and Social Inquiry, Monash University: Rudd keeps winning small battles, but Abbott looks like he is winning the war. Labor is hitting the Coalition hard on accountability, but Abbott’s parental allowance scheme will appeal to the outer-suburban electorates, notwithstanding the intense dislike of the scheme across the political and business community.

John Connolly, founder of John Connolly and Partners public relations firm: As the recently late Elmore Leonard wrote, “you thinkin’ bout the time I shot you and you rose from the dead? It only happens once in your life.” KRudd rose on last night’s debate. Of course Abbott had handed him an opportunity with his plan to give youngish people on $150,000 a year $75,000 for six months with baby, but dud pensioners on $19,000 a year. But as Elmore says, the dead only rise once. The election won’t be close, but the LNP won’t control the Senate, so Kevin has made a difference. Win: Rudd.

With the Coalition releasing its manufacturing policy yesterday, it’s moving further into the red and has now made  $36.84 billion in promises since August 2. Watch for the formal announcement of spending cuts towards the end of the campaign — that will send the Coalition towards the black. We’re also waiting for clarification from the Coalition on what its controversial plan to tinker with superannuation fund earnings (through changes to franking credits, to partially pay for the paid parental leave scheme) would net. We’re updating our online Cash Tracker daily so you can monitor what the parties want to do with your money.

On Labor’s side, a few “rats and mice” promises yesterday (and there’s been an awful lot of those) have left Labor with $15.13 billion in the election warchest. Here’s the state of play as of this morning:

And here are the cash promises made over the last day …

Kevin Rudd: After the excitement of the leaders’ debate in Brisbane last night (which it seems like only die-hard political tragics watched; it was televised on the big screen at Melbourne’s Federation Square, where two people stopped to admire it), Rudd headed to the marginal Geelong seat of Corangamite today. He geed up union members and ranted about WorkChoices, but will that souffle rise twice? He also talked about small business.

Tony Abbott: Forget about Abbott. John Howard was given a rock star reception this morning when he launched low-profile Coalition MP Steve Ciobo (remember him? No, nor does anyone else) on the Gold Coast. Abbott was at Sydney’s St Vincent’s Hospital releasing policies on health and road safety, with the rarely sighted threatened species Peter Dutton (that’s the Coalition health spokesman to you).

Christine Milne: The Greens leader was fired up this morning about the Coalition’s costings and Labor’s cuts to uni funding. She took a train to Ballarat — lamenting that it wasn’t high-speed rail.

Meanwhile, the WikiLeaks Party is imploding. Let’s see the internal evidence detailing what went wrong; perhaps they could post it to the WikiLeaks site? Senate candidate Julian Assange hit the Australian media this morning in damage control mode.

PIC OF THE DAY

Thanks to @CanberraInsider for tweeting this. Ah, Kim Beazley; he might have had egg on his tie, but there was something inspiring about him. Is that a youthful Mike Carlton listening in, as Kim speaks to the media on board a RAAF VIP jet during the 1998 election campaign? 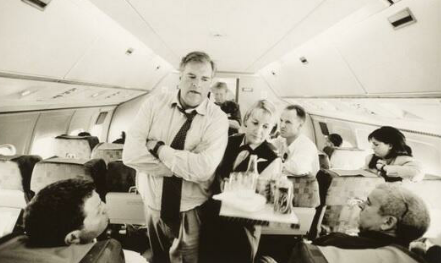 Yes well, if you were WikiLeaks you’d be focusing on Bradley Manning today too, rather than what’s happened to your fledgling party …

Interesting that even the majority of commentators in The Australian gave the debate to Rudd, sometimes grudgingly. All by itself this has to have some significance, surely? (Cannot please Col Pot or Rupert?) All except the true blind ideologues, namely Greg Sheridan, Chris Kenny and Judith Sloan. A sampling:

Paul Kelly: It was a sharper, urgent, more aggressive Kevin Rudd. Walking about the floor, confident and directly confronting his opponent, Rudd showed he can fight from behind. Rudd had the best of the second debate. He lifted. He was relentelss in raising doubts about Tony Abbott’s costs and plans. Rudd gave Labor’s campaign fresh momentum against Abbott.

Patricia Karvelas: A narrow win by Rudd who was aggressive, persuasive and back on message.

Troy Bramston: Rudd was again a better debater, and won, because he had a sharper pitch to voters, landed blows on Abbott and looked more confident. Abbott started strongly but stumbled badly and lost his cool over paid parental leave costings.

David Crowe: It took only 25 minutes last night for Kevin Rudd to get under Tony Abbott’s skin … Abbott tripped up with the only memorable remark of the event: “Des this guy every shut up?” the smirk on Rudd’s face a moment later showed that he knew he’s won the point. Given the blandness of the rest of the forum, it also meant he won the night.

Greg Sheridan: Kevin Rudd spoke more words and chewed up more air time, but Tony Abbott spoke more directly and was more comprehensible to the average voter. … Rudd looked dangerously aggro this campaign, but he settled down soon enough. Abbott also tested the boundaries when he asked: “Does this guy ever shut up?”, though it was a sentiment that might have resonated. … This was not a game changer but was certainly useful. Rudd improved on last time, but Abbott took it by a nose.

Chris Kenny: Finally some authentic passiona and spirited performances from the contenders. Even Rudd’s physical intimidation over costings and Abbott’s frustrated pleas for his opponent to “shut up” were on message, but in the end Rudd loses because he wasn’t able to recast the contest.

Judith Sloan: Is Rudd missing his true vocation? Prolix schoolmaster who thinks he is an expert on everything and bandies around figures, many of them wrong. There was no real winner.

(me: re section in italics above: Hey Judith, who we talk’n ’bout here? (Freudian or what?))
…………………………
Meanwhile a true metaphor for both the politics and the modern philistine conservative: Yesterday, a matter of hours before the debate on the same site, a trifecta of conservatives we love to hate–Abbott, Campbell Newman & Teresa Gambaro–promised over $5 million to help upgrade the Brisbane Broncos’ leagues club! That’s a mere 50 times (5,000%) more than the Premier’s Literature Award which Newman scrapped within days of taking office justifying it by saying the budget needed to be trimmed (this brave action saved 0.0005% or or a 188,000th). It is worth repeating what Anna Funder wrote at the time: “I have spent my professional life studying totalitarian regimes and the brave people who speak out against them,” Funder told ABC Radio. “And the first thing that someone with dictatorial inclinations does is to silence the writers and the journalists.”

OK, if it is alright for The Australian to reproduce a Fairfax piece in its Cut & Paste column then Crikey readers should not be deprived of the entertainment: (extract only, worth reading in full on smh site).

[Don’t quote me, says Tony, but maaate …
Mike Carlton, August 17, 2013
.
Feet up on the lounge in his hotel suite, sky-blue tie loosened at the neck, Tony Abbott is relaxing after another gruelling day on the campaign trail. I’ve been given a rare half-hour to chat with him, which he begins by enthusing about the Liberal candidate for the western Sydney seat of Wirraway.
.
”Great tits and a fantastic arse,” he says.
.
”Oh dad!’ ‘sighs one of his ever-present daughters.
.
The candidate is Terese Haddad, a 34-year-old mother of two who has a PhD in plasma physics, is qualified to fly jets, won the Boston Marathon in 2011 and has turned down a season as principal cellist with the Berlin Philharmonic to run in this election. But the Opposition Leader sees greater political virtues.
.
”There’s not a red-blooded bloke out there who wouldn’t want to throw a leg over soon as look at her,” he says with a boyish grin.
.
”Dad, stop it!”
.
One subject still leaves the Opposition Leader uncomfortable. ”I’ve come a long way on homosexuals over the years,” he says with a rueful grin. ”Although I still wouldn’t want to be in a dunny alone with a homo. But I wouldn’t think of punching them out any more.”
.
Same-sex marriage, though, remains off his radar. ”I think what they get up to is pretty disgusting, frankly,” he offers thoughtfully. ”I don’t know how they ever work out which one’s the bloke and which one’s the sheila.”
‘
At that my half-hour is up. The next prime minister farewells me with a meaty handshake.
.
”If I’ve said anything wrong I can trust you blokes at News Corp to clean it up for me or leave it out,” he chuckles. He gives me a manly thump on the back. ”And if you see Rupert, pass on my best wishes. He knows I’m only a phone call away.”]

To the cut and pasters at News Ltd, they should try to remember that it is Tony Abbott who is running for PM, not Mike Carlton.

Re the campaign photo, you suggest that it is Mike Carlton.

I have heard another claim that it is Mike Seccombe. I think I need to ask Mike. And is that Ray Strange closer to Kim?

Ha! Love it. ALP campaign propaganda craps on about Abbott cutting stuff, as much as $70 billion. Cr_key has him outspending Labor by $50 billion. Pinheads!