So you think you can dance, Rupert. Well, this tip has everything. Ever wanted to see Rupert Murdoch perform a dance to the song Do Da Heisman  (sample lyric: “shortie fine, breath stank, do da Heisman on dat ho” with a robot? Of course you have. 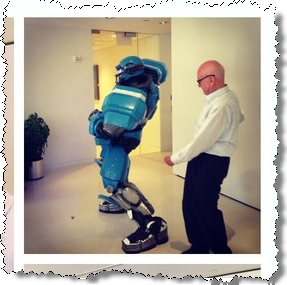 “Fun afternoon in New York. How many bosses play along when a robot asks them to try the Heisman?” was the caption on the photo gallery on Murdoch’s official Tumblr, Murdochhere (a Tips favourite). How many bosses, indeed? Here’s Rupert intently studying the robot’s moves … 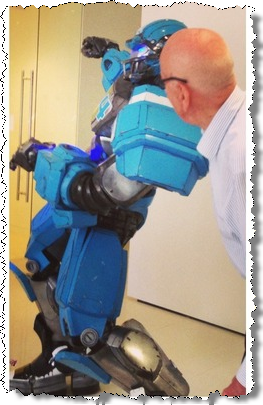 If you’d like to learn the Heisman dance, it’s on YouTube. Tips tried to entice Crikey’s editor to perform an office dance, but all we got was a half-hearted Nutbush. which sadly ended in the dancer hitting the carpet.

ABC poachathon. The ABC has raided media rivals to brush up on its newsbreaking cred. A crack squad of journos will be announced this afternoon, to include Sydney Morning Herald investigative reporter Linton Besser and The Age‘s crime editor Dan Oakes (both will be big losses to Fairfax). We’ll bring you the news the moment the embargo is lifted — check out our website this afternoon. It’s good news for Aunty — but a blow for some struggling newspapers who’ve lost talent. Watch this space …

WikiLeaks preferences. WikiLeaks created a storm when it preferenced right-wing parties ahead of the Greens, a move that may cost Greens Senator (and the 43rd Parliament’s staunchest defender of Julian Assange) Scott Ludlam his seat. This tip comes from an anonymous source, so make of it what you will:

“There were two sides inside the party arguing for two different strategies on preferences. One wanted to order parties purely according to principle, which would have seen the Greens high up, and the other was working with an assortment of micro-right and Left parties each aiding each other in different states. This involved putting parties like the Greens and Labor behind parties like the Nationals, Shooters and Fishers, Australia First etc. Ultimately the latter side, who lodged the Group Voting Tickets, was successful.

However — there was majority support for doing a deal with the Greens up until about a week ago when senior Greens across in the country, but most noticeably a high-profile Greens media adviser in NSW, decided that they would launch a public assault on the party and pre-empt any decisions of WikiLeaks by publicly throwing around accusations of a deal with One Nation. Whatever chance there was of a deal died then, with many in WikiLeaks convinced the Greens were too aggressive and disingenuous in their negotiations by taking them public. Those same people are now lambasting WikiLeaks for the decision that was made as a result of their actions in the first place!”

Sure, great decision. If you want to elect a Nat instead of a Green because you care about privacy of information and the public’s right to know, vote WikiLeaks.

Fire levy query. Victoria has changed the way people pay for bushfire protection in the wake of the devastating Black Saturday bushfires. Formerly, people with insurance paid a levy (take-home message: don’t take out insurance, others will pay for the fire brigade). As of July 1, everyone pays via council rates (or through a separate notice if you don’t pay rates). One reader detected a possible rort:

“My house and contents insurance ran from Feb 2013 to Feb 2014 and included a FSL [Fire Services Property Levy] fee of $366 under the old system. However my local council rates have just arrived for the period 01/07/13 — 30/06/14 and include a $259 FSL fee. So I ring my insurer GIO to enquire about getting a pro-rata rebate for the FSL charged on my house and content policy, otherwise I’m paying twice from 01/07/13. After speaking with several GIO staff, I was informed that they were unable to refund any FSL. In effect this means I’m paying FSL twice from 01/07/13 until this home insurance policy concludes or is renewed in Feb 2014. Where has all the extra FSL money gone? Is the State Government simply pocketing this FSL double payment windfall? Why can’t the insurers refund any FSL, pro-rata?”

A possible problem with this system is that depending on when your insurance falls due, you might pay more than others. Or will our reader cop another insurance levy when he renews in February 2014 (the levy to cover February 2013 — June 30, 2013)? Jump in the comment stream on our website if you know more about this issue.

Fail, fail, fail. One of our WA moles was not impressed to receive a glossy pamphlet from the Liberal candidate for O’Connor, Rick Wilson.

“At the end after the ‘Delivering stronger borders’ rant and the compulsory shot at Labor, ‘50,000 refugees costing $10 Billion,’ is a curious addition in bold type. The WA National’s candidate from Geraldton don’t support the Liberals’ plan to stop the boats.

Apart from showing a disturbing lack of support for the rules of grammar, it shows who they consider to be the real enemy. Geraldton, of course is not in the electorate of O’Connor, but anyone seeking out the scoundrel(s) could track down biographical data on birth sites of National candidates or waterboard the state member for Geraldton, oops he’s a Liberal.”

Ms Tips is well aware that nothing — nothing — annoys Crikey readers more than poor spelling and grammar, so we award Wilson a fail on all fronts.

Letters about Sophie. Crikey has taken an interest in the re-election chances of Liberal frontbencher Sophie “light globe” Mirabella (although a poll in The Age, not online, over the weekend seemed to indicate she would hold her seat). A tipster pointed us towards this rather fun Facebook page in which “supporters” of Mirabella pen letters to aid her campaign. Here’s a sample: 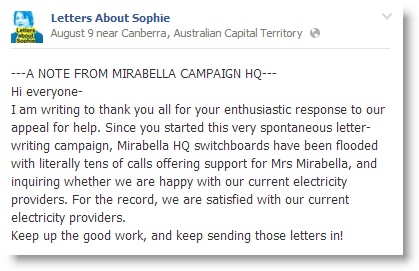 “If you want to elect a Nat instead of a Green because you care about privacy of information and the public’s right to know, vote WikiLeaks.”

Er, no. If you care a whit about where your vote ends up, take the extra couple of minutes to vote below the line and direct your preferences wherever the hell you like.

Senate voting needs to be reformed to either make it possible to express preferences above the line, or abolish above-the-line voting entirely.

Re the fire levy fiasco – my home insurance also comes up for RENEWAL in February each year and its always been my understanding that you pay your premium for the year ahead, not the year past because it is a renewal of a policy – if you paid for the year past, you wouldn’t be ocvered for the forthcoming year…… I too am with GIO, so I might just put in a phone call to them and see what they say….(I bet they have something written down in the fine print that no one ever reads)
One other thing that really annoys me about insurance policies is that we pay not only state govt stamp duty, but also GST – how many times can you be taxed for one insurance policy?

Can I just add – how can the fire levy be paid for the previous year and your renewal be for the forthcoming year? (thats what I was trying to get at in my previous post) It just doesn’t make sense and sounds like a bit of ‘spin’. So if we are paying the fire levy in arrears, does that mean I did not pay any fire levy between February 2013 and June 2013?

The RACV tells me that the sums it attributed to the Fire Services Levy when I renewed home building and contents policies in 2012/13 were to apply only up to when Victoria joined the rest of the world in collecting for this service through council rates. That is consistent with the fact that the FSL component of my insurance premiums in that year was a little bit lower than in 2011/12.

What took me by surprise is how much more I am paying under the rubric Fire Services Levy than I used to via my insurance company. The item in my council rates is $178, compared with $113 on my combined insurance policies in 2011/12. That’s a 57.5% increase in 2 years. I thought that a change designed to see that those without insurance shared the burden of the cost of fire services would see my contribution drop. Instead it has risen faster than anything else in my budget.

I suspect that not all this money is being spent on fire services. How fast can they gear up? I suppose that a slice of this levy is going to be clawed into the State government’s general coffers.

So Wikileaks was responding to Greens’ actions. And in doing so committed suicide (volunteers leaving, senate candidate stepping down).

Sounds like a BS “leak” to make Wikileaks look good. And it doesn’t even succeed.