The Courier-Mail plays fast and loose with photos, using one of the PM at the Australian War Memorial to show how down and out he is. Plus other campaign bites of the day.

Has bias got no limits? You’ve got to wonder just how far the distortions of the Murdoch media can go after this effort on the Courier-Mail website. 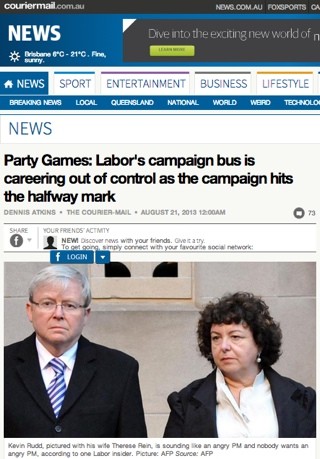 The clear impression is of a couple who are down and virtually out. And no indication that it is an old file photo taken, as Therese Rein tweeted this morning, at the Australian War Memorial as they were reading out the names of soldiers killed in Afghanistan. The facial expressions of Mr and Mrs Rudd yesterday were more accurately reflected in this picture accompanying the hard-copy version of the story: 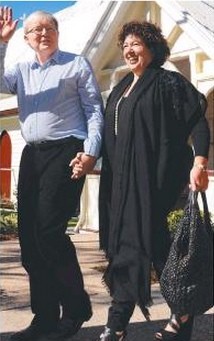 After criticism from readers this morning, The Courier-Mail removed the image and posted this editor’s note:

A previous version of this story featured a file picture of the Prime Minister and his wife taken at the Australian War Memorial. The Courier-Mail apologises for any unintended offence caused by use of that image, which has been replaced with a recent picture from the campaign trail.

Campaign reading: spending and deficits coverage increases. Labor will be encouraged that election coverage is turning increasingly to the question of money. If only, they must be hoping, the electronic media follows.

David Uren and David Crowe with “Decades of deficit unless parties find billions in savings” set the scene for this debate today in quite an even-handed way:

“The major, long-term spending commitments of Labor and the Coalition — worth more than $50 billion each — threaten a blowout in the deficit beyond the three-year budget estimates without billions of dollars of additional savings.

Analysis by The Australian reveals the Coalition needs to find savings of almost $20bn a year from 2017-18 to offset its spending and tax cut promises, while Labor has to find annual savings of $10bn, with the challenge rising sharply beyond the budget period.”

“Their patron is that alleged s-xist, Tony Abbott, who has the most pro-working women policy in our history, a document that is extravagant, fiscally dangerous and certain to inflict pain elsewhere.

The paid parental leave policy is Abbott’s self-declared ‘captain’s call’. It is opposed by many of his senior colleagues who denounce it in private. It is, above all, a high price gesture to convince women that Abbott is their friend and will champion their deepest aspirations.

The lack of transparency is contemptuous. Abbott says his policy is fully funded by the Parliamentary Budget Office yet he refuses to release such details for his biggest single policy of the election. This is a neat tactic but unworthy arrogance.”

As if determined to give fiscal conservatives something to worry about, Kelly describes the extent of Abbott’s commitment to female-friendly policy as extraordinary. He argues rarely in history has a leader proceeded with such methodical determination to resolve a weakness in his voting profile. It revealed the remarkable nature of Abbott as a big-spending, non-means testing, social justice reformer.

Laura Tingle behind the paywall in The Australian Financial Review also takes on costings. Her criticism is of the way the Coalition keeps voters in the dark on costings before blackout. Leaving the numbers until virtually the last days will limit Labor’ scope to attack them.

Mark Kenny of The Sydney Morning Herald sees Hostility rising: Abbott could be left holding the baby. He predicts of the paid parental leave scheme championed by the Opposition Leader:

“Such is the depth of opposition to the plan that hostility is simply on hold pending the election rather than resolved. Given its 2015 start date, the scheme’s chances of surviving unscathed seem low.”

So Mrs Woog headed off, had a great visit (with her Mum and her Mum’s best friend), but had to leave early for the school pick up. Could she return for an interview? Of course. Do come again. (There was an election in the offing, after all.) And so Mrs Woog did just that and the encounter was captured by the PM’s office — on an iPhone! They edited the footage and sent it back.

Campaign listening: ABC JJJ 99.3 Perth. Breakfast hosts Tom and Alex were celebrating this morning because they had become a top-rated program way out there in the West. Not for people listening while getting ready for work actually but for the slot beginning at 4am. Whatever. Quite an achievement. And surprisingly for an oldie listening to them for the first time this week I can understand why. Bright and breezy.

Peter Slipper was this morning’s political highlight for using his old signs with black and white photos dating back to the 1980s with their LNP logos from campaigns past cut off. As Tom and Alex played I Saw the Sign the listener expressed some sympathy for Slipper. He probably could not afford new signs because he needed all his money to replace his recently stolen flagpole. Now there’s a story of dirty political tricks I had not seen in the mainstream media. Appropriate then that the next song was Money is the Root of all Evil.

Next, a word association game to mark the campaign midway-point. Christopher Pyne? Weasel. Bill Shorten? Junkyard dog. Penny Wong? Meerkat. Craig Thomson? Skunk. Pauline Hansen — gorilla or the racist panda. Gillard? Orangutan. Should asylum seekers have more s-x appeal? Yerh, can’t hurt. If you had to fight Bob Carr to the death what weapon would you choose? His books, his massive collection of books. And Joe Hockey? A hockey stick for irony. The word that first enters your mind when I say — Rudd!  Milk. — Abbott! Ears, suppository.

Things were only slightly more serious when the Gruen Report’s Wil Anderson previewed tonight’s edition with some comments on Labor using an actress in an attack ad. It was all ridiculous. Of course people used actors in advertisements. At least Labor was creating jobs by doing so. But there was an element of nostalgia as whinging Wendy’s contribution from that long-gone John Singleton campaign for Bob Hawke was given a re-run.

The nightly news. When both the ABC 7pm News in Canberra and 7.30 which follows it feature a football story as the lead item at the mid-point of an election campaign, you know news editors reckon their viewers are just not interested in politics. So it was last night with the Raiders sacking a rugby league coach and the Cronulla Sharks providing further reason to think that the Australian Sports Anti-Doping Authority really is on to a scandal.

Yet when the vision did turn to politics I found it fascinating. Rudd addressing a crowd outside with wind blowing the coiffed hair made the Prime Minister look not like an Australian nerd but more the gutsy political battler. If he can keep performing like this while retaining his smile, and avoid the temptation to shout, the image of the underdog fighting for what he believes is right just might make a difference come polling day — whatever the polls are now.

Abbott, meanwhile, was sticking with the tried and true — visiting a shopping centre and kissing babies in that totally staged fashion that the television directors know bores the viewers.

Not The Courier Mail apologises for misleading its readers by its choice of photo!

Since when did the Murdoch sty ever cause offence without intending it?

Standing outside their shop front, they’ve got these tastefully draped window-dressing dummies in PCP’s and mission statements about commitment “to accurate, fair and fearless publication of news and commentary”, they can stand hand-on-heart and point to as being proof of their proof of their interest in keeping us punters informed – but step inside and this is the merde that passes for “Political Commentary” in a Murdochracy.

The Courier-Mail apologises for getting caught.