TV guru Adam Boland perhaps shared a little bit too much with The Sydney Morning Herald, including details of his sex life that were later expunged.

SMH expunges Boland’s s-xy talk from history. Feature writer Mark Dapin should have bought a lottery ticket after sitting down with breakfast TV guru Adam Boland for The Sydney Morning Herald and The Age. Boland was a profile writer’s dream, letting rip about everything from his past relationship with Sunrise executive producer Michael Pell to his irritable bowel syndrome. “I do not think I have ever spent time with anyone who speaks so quickly, so much and with such candour,” reflected Dapin in the piece. But Boland was a little too candid.

The original version of Dapin’s article — uploaded online on Friday and published in the weekend SMH — included a lengthy section on Boland’s former relationship with a woman. The woman’s full name was published, along with her current job (she’s got a senior media role). Boland reflected: “The fact that I was still able to maintain a relationship with a girl meant there was still some question mark over it [his s-xual orientation] … and I enjoyed s-x with her. We did not separate because we fell out of love, we separated because I was gay.’”

After the article was published Boland tweeted: “I hereby apologise to anyone who has ever been in a relationship with me. I suspect I’ve offended them all during an interview with The Age.” Indeed, he had. Boland’s ex-girlfriend was aghast at her s-x life being made public and the offending passage has now been scrubbed from the online version. — Matthew Knott

Chenoweth goes rogue. Here’s a website for Chris Mitchell and his Cut ‘n Paste minions to add to their favourites tab: The Australian Financial Review‘s chief Murdoch watcher, Neil Chenoweth, has started a blog. The Murdoch’s Pirates author is using the blog, named Trust the Toffs!, to post detailed analysis of News Corp and to continue a spat with The Oz‘s editor-in-chief that kicked off last year with a delightful email barney.

21st Century Fox payday. Two of three Murdochs have made a nice bit of cash from the split of News Corp into 21st Century Fox and new News Corp. A filing with the US Securities and Exchange Commission yesterday reveals that Rupert and son James, plus chief operating officer Chase Carey and departing finance whiz David DeVoe, have split more than $US74 million in cash between them as a three-year, long-term, performance-based compensation. The cash was paid out last Thursday, which was based on that day’s closing price of $US32.27 per share of 21st Century Fox shares. The incentive amounts were calculated at a time when the stock was trading just under its all-time  high of $US33.38.

Carey was the big winner, receiving $US32.5 million. James Murdoch received $US18.9 million, Rupert Murdoch received $US14.7 million, and David DeVoe got $US8.7 million. These amounts are not the full pay the quartet received for the 2012-13 financial year. That won’t be disclosed until the company’s proxy statement is released in a few more weeks ahead of the annual meeting in October. — Glenn Dyer

Caption confusion. The Daily Telegraph‘s page-seven story today on the murder of Australian baseball player Christopher Lane includes photos of the three suspects, who have been named by police. The caption identifies the three, top to bottom, as Michael Jones, Chancey Luna and James Edwards.

Anything look familiar about the first and third photograph? They are the same person, James Edwards. The missing suspect, Michael Jones, looks like this: 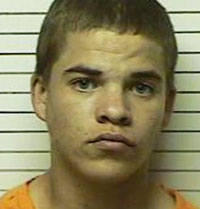 Seek slips. Despite the increasing number of Australians looking for work, online jobs search site Seek has gone backwards in Australia and New Zealand this year, although Asian growth is more than making up for the shortfall. Seek has reported a net profit of $141.1 million for the year to June, excluding one-off gains relating to acquisitions. That was up 8% from $130.2 million in 2011-12 (which was up 35% on the previous year). Chief executive Andrew Bassat said in the profit announcement the result was achieved “despite subdued macro conditions”.

“Subdued” is the right word. In the year to June the Australian and NZ businesses (which are the heart of the business) had revenue of $234.9 million, which was down from the $247.8 million reported the year before, while earnings before interest, tax, depreciation and amortisation fell to $141.6 million from $152.1 million. Revenue in Australia and NZ rose 11%, and earnings before interest, tax, depreciation and amortisation (EBITDA) was up 14% on the 2010-11 financial year. But last financial year that turned around and fell 5.2% (for revenue) and 6.2% for EBITDA.

It’s not too hard to find the reason for this weakness. The monthly ANZ job ads shows there was a 14.7% fall in the number of internet job ads in the year to June 30 to 135,574. That sort of fall is enough to put a dent in any well-run business. — Glenn Dyer

Hannibal Rudd? News Corp’s Janet Albrechtsen is no fan of Prime Minister Kevin Rudd, but does she really think he’s a cannibalistic serial killer? Her article in today’s Australian argues that our PM is a psychopath, complete with creepy drawing of Rudd in a Hannibal Lecter-style mask. 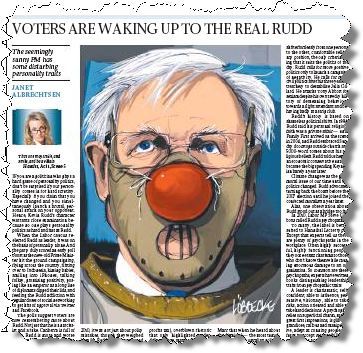 Royal commission seminar. The Dart Centre for Journalism and Trauma in Sydney is putting together a free, one-day event to promote responsible reporting on the Royal Commission into Institutional Responses to Child S-xual Abuse. The event will be held on Friday, August 30, and will include panels and workshops.

Video of the day. BuzzFeed‘s editorial director Jack Shepherd shared seven tips to reach a wider audience and create online content that goes viral at the Storyology: Ideas Write Now! conference as a guest of The Walkley Foundation for Journalism (the footage is supplied by Tilt Vision). Yes, the lecture includes cat gifs …

With that kind of invective one could be forgiven for wondering if Ms Albrecthsen is mentally stable, or is this a personal vendetta over a friendship that existed some years ago?

Albrechtsen is an absolute disgrace. I wouldn’t waste my time reading the Murdoch rubbish, especially what she writes, but if your report is correct, then surely this is one for whatever body oversees decent comment in the press.
One can only hope that most rational people see this kind of nonsense for what it is. Janet A has featured prominently on various ABC programs lately. Perhaps they should also think twice before subjecting their viewers/listeners to such ?defamatory comment, bordering on the fac+st, from this clearly partisan woman.

Consider how “Planet Princess” – The Horse Head Nebulass – stood by Sister Juliar – with a stiletto?

Nice to see the Tele left out a photo of the white kid involved in the murder, making it look like “Da N!ggas done it”!

Re. Janet A, remember the Howard government thought she was suitable for a position on the ABC board.