Labor might be able to hang on to power, depending on how much states diverge in voting outcomes.

A broad-based state breakdown of polling since late July suggests Labor is in with a chance of holding onto power even if it loses the popular vote nationwide.

The counter-intuitive result reflects how much Labor is banking on being able to use gains in Queensland to offset losses elsewhere. But it also shows the dramatic turnaround in Labor’s fortunes since the same numbers were run earlier in the year. 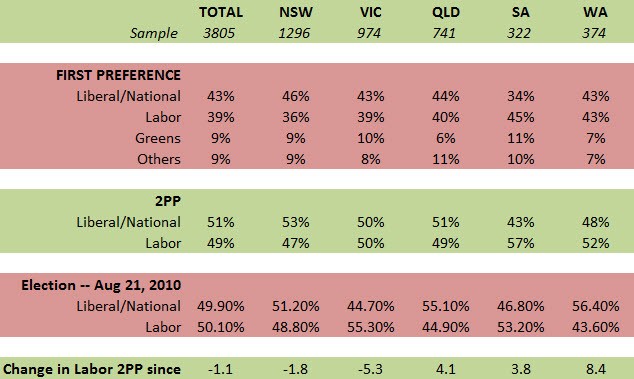 In NSW (sample 1296), which swung to the Coalition in 2010 but failed to deliver the seats necessary to get the Coalition over the line, Labor is facing a 1.8% swing against it. This would deliver Greenway, Robertson, Lindsay and Banks to the Liberals. With the inevitable addition of Lyne and New England for the Nationals, that would be six seats in NSW, more than enough to secure Opposition Leader Tony Abbott victory, all other things being equal.

In Victoria (sample 974), Labor is also facing a big swing, albeit from a strong performance in 2010, when Labor picked up over 55% of the two-party preferred vote. If the 5.3% swing found by Essential eventuates, Labor would lose Corangamite, Deakin and La Trobe fall, further adding to an Abbott majority.

But outside NSW and Victoria, things start to go wrong for the Coalition. In Queensland, (sample 741), where Labor is pinning its hopes, the Coalition’s strong performance in 2010 means even an average performance by Labor might yield seats. At 51-49 to the LNP in the state figures, that’s exactly what might happen: the 4.1% swing to Labor would cause Brisbane, Forde, Longman, Herbert, Dawson, Bonner and Flynn to switch to Labor. and Mal Brough struggle to take Fisher.

After that, we’re in surprise territory. Contrary to reports Labor is concerned about South Australia, a small sample (322) there suggests a swing of 3.8% to Labor on top of its strong 2010 performance — enough to seize Boothby and Christopher Pyne’s seat of Sturt.

And over in the west, a small sample of 374 suggests a mammoth 8.4% swing to Labor off a dismal 2010 performance, handing Hasluck, Canning, Swan, Stirling and Cowan to Labor.

Net result: Labor gains five seats and holds on to power with a small but very workable majority.

Now, let’s point out that problems with this outcome. For a start, there aren’t big enough numbers for Tasmania, but it seems clear Labor will lose at least one or two seats there. So its net national gain is more likely three.

The WA swing is plausible given how badly Labor performed in 2010 and, anecdotally, Labor has been hearing positive things in the west. But 8.4% simply looks too big, and more likely reflects the small sample size. Ken Wyatt should still be nervous in Hasluck, but those on bigger margins are likely to be safe. Without those other four seats, it’s a net national Coalition gain of one seat.

And Pyne has shown remarkable resilience in Sturt over the years, and it’s hard to see him falling; indeed, the swing looks implausible given how strongly Labor performed in 2010. Andrew Southcott might hit the fence in Boothby, but it’s likely that’s the extent of the damage.

So that gets us back to no net change in seats.

Then there’s Melbourne, likely headed back to Labor courtesy of the Liberal’s decision to preference against Adam Bandt. Labor net gain of one. But Steve Gibbons’ retirement in Bendigo will dramatically cut Labor’s margin there — a small swing against Labor in Victoria will, I suspect, return Bendigo to the Liberals. Back to no net gain.

In NSW, Daryl Melham copped a huge swing in 2010; it’s possible he’s seen the worst of it, although he’s up against the least worst of the Liberals’ slate of godawful candidates in western Sydney, David Coleman from the Nine Network. Labor net gain of one.

Thus, it’s Queensland that’s the key. Essential has a decent sample for the state, and it’s showing Labor eking out a number of seats despite a relative lacklustre performance. But don’t forget Capricornia, on only 3.7%, where Kirsten Livermore is retiring. Labor will struggle to hold that.

I think you forgot Dobell in your analysis.

All I can say, is that Bernard Keane really believes that analysis, he should put his house on the ALP to win, or any of those ALP candidates individually (eg in Sturt) at 7-1 or better.

The Liberals are BORN TO RULE!!!

How DARE you question that!??!

I don’t expect Labor to win but wouldn’t be too surprised if it did.

Last night, at a large community non-political gathering, held in a Labor-held seat but in an area of the division which always predominantly votes Liberal, one speaker opined, as an aside, ‘the current election is a choice between the truly bad and even worse’. Deafening applause.

Perhaps the ‘devil you know’ will win.

There are a handful more interesting seats. In NT, we might see either a Coalition gain, Labor gain or no net change as both seats are marginal and both held by the party that did less well there during the territory election. The other interesting one is Indi, although I think that even if McGowan wins, she is likely to support the Coalition anyway.