Not short’en style. “Subtly elegant. Decisively contemporary. Infinitely versatile.” And if that doesn’t sum up Labor frontbencher Bill Shorten, we don’t know what does. That conclusion was sparked from this observation from a jet-setting mole: “Bill Shorten seen going through security at the Sydney virgin lounge … complete with Louis Vuitton suit bag <gags>.”

We looked up some Louis Vuitton bags and found the catchphrase above. Check out the company’s man bags here. They’re certainly not cheap, so what is this hero of the working class doing toting one around? Shorten then headed straight for “The Club”, Virgin’s equivalent of Qantas’ fancy invitation-only “Chairman’s Lounge”. The Chairman’s Lodge is an old-white-man-only zone full of pollies getting free food and wine — and keeping well away from the great unwashed jammed into the gate lounges.

Watch out for Clive’s iceberg. A surprised reader received this in his mailbox in the Brisbane electorate yesterday, and has kindly offered to send Crikey the Titanic II “video” contained within (another reader received the package in New England). The kit comes in a sealed plastic sleeve. 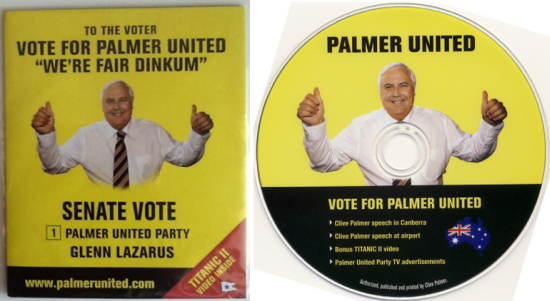 We took note, too, of where it was printed … isn’t Palmer all about protecting the future of Australian industry?

Crikey is keen to hear about the best / worst election merchandise out there. If you’ve spied something fantastic or woeful, drop us an email (pictures welcome).

Stop the bots. Got a call from a robot yet, telling you who to vote for? Plenty of readers have — and alarmingly, sometimes you actually can’t hang up from their calls … what happens if someone wants to call an ambulance but can’t use the phone because a ‘bot is on the other end?

“My electorate is Kingsford Smith, I got four calls in six days, try and cut them off, but they are still there when you pick the phone up again minutes later, and have to be answered to cut them off. Am male over 65, live alone, and have now answered as 18 and 45-years-old females, and 45-year-old male. Also too few options, question who would best stop the boats, Abbot or Rudd, push one or two, no chance to register neither. Suspect this Labor panicking. Have also said I would vote for all four candidates, no option to push button for voting informal.”

“I have received at least three robocalls but as soon as I realised that a ‘machine’ was ringing me I hung up. My electorate is Canberra.”

“I, too, live in the Mallee electorate and received an unwelcome recorded message spruiking Liberal candidate Crowther. I hung up as soon as I realised what it was, and I was VERY angry to have my Sunday night dinner interrupted by an unwanted call.”

Quite a few of our respondents are on the “do not call register”, but as we told you yesterday, political parties are exempt from that. But it’s not all bots; an Eden-Monaro resident reported that: “I was contacted at home this evening by a volunteer for Labor’s Mike Kelly’s office asking me what issues were of interest/concern to me.” Crikey reckons this is far more palatable than being talked at by a robot; at least a real person can process what you say.

Bank behaviour. So it seems that yes, you might be hit by a late fee if you pay your credit card bill early (Tips passed on a rumour about this yesterday). This confirmation from a Westpac customer:

“My credit card account arrives with payment due on ninth of month.If I pay before the ninth and leave a balance it is not counted as being a current payment and I get late payment fee of $9 around the 28th. Got a lecture from the bank a couple of years ago about this. ‘Have to pay inside the window 9th to 24th’ or some such.”

Here comes Nick Clegg. Tips was interested to see this notice from the AEC:

So it seems like we’ll be following the UK’s lead in having the Liberal Democrats as a political force (however small). In the UK, of course, the Lib Dems are in a high-profile power-sharing deal with the Tories. Here in Australia the party now known as the Liberal Democrats was formed in 2001, changed its name a few times, describes itself as a “small government alternative”, and seems to be very blokey. Don’t get the old LDP confused with the DLP (anti-abortion John Madigan is a Democratic Labor Party Senator and could wield big influence after the election).

Australia’s banks are the guardians of moral society. Yep, we kid you not

“I was VERY angry to have my Sunday night dinner interrupted by an unwanted call.”

Anyone who is “VERY angry” because of these occasional calls needs to calm down a bit and consider anger management classes. Such calls are no more than a low-level annoyance that lasts for a few weeks every few years. Confected anger like this makes me wonder what these “VERY angry” people would do if someone’s behaviour seriously affected their lives.

If they were “VERY angry” they would get out from behind the keyboard and visit the local office of the party that made the call and make their point in a way that is really likely to get attention. That might not reach as wide an audience, of course. So we can judge whether these whingers are more “show pony” than motivated to address the problem.