Beat-up of the day goes to the Gold Coast Bulletin for its attack on the PM's bowling skills, but The Courier-Mail is not far behind with calling Rudd a fatty.

Campaign reading: Another award-winning performance from Gemma Jones.  Murdoch attack dog Gemma Jones has done it again with this penetrating piece of political analysis that moves her well clear at the bottom of our journalist of the campaign table: 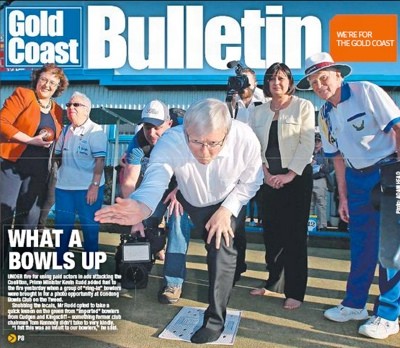 “Ex-Condong Bowling Club chairman Tom Kennedy said the bowlers had been prearranged by the party.

“‘I’m a Labor voter but I was a little bit disgusted by what happened today,” he said. ‘They had a photo shoot and used a bowler from Cudgen and two from Kingscliff. I felt this was an insult to our bowlers.”’

Getting marks for trying. At least Kevin Rudd’s great moral issue of our time has not been forgotten by The Sydney Morning Herald. For the second day in a row the paper has a climate change story dominating page one. “Revealed: 80cm sea rise warning” by Ben Cubby and Peter Hannam reports that the world is on track to become up to five degrees hotter, while sea levels could rise more than 80 centimetres this century.

“It makes little political sense, borders on economic vandalism and, via obscenely generous handouts to the very wealthiest Australians, does far more to wage ‘class war” than any policy prescription that Abbott and his claque of urgers have attacked Labor for in recent years.”

“Tony Abbott’s ‘pretty face’ remark: this language must now be a strategy“, argues Lenore Taylor at the Guardian.

“Tony Abbott has again referred to the looks of his candidate for the western Sydney seat of Lindsay, praising her answer to a question about his economic plan with the comment: ‘Obviously from that answer she ain’t just a pretty face.” …

“After referring to Scott’s ‘s-x appeal’ last week in a list of attributes that made her a great political candidate, Abbott said he had had a ‘dad moment’ and had been ‘exuberant’ on the day.

“But the very deliberate repeat reference suggests Coalition strategists have decided the ‘s-x appeal’ comment actually worked for them in the seat.”

I didn’t notice the story “Moon-faced’ PM ‘comfort eating’ as the stress of the Federal Election campaign takes its toll” when I flicked through The Courier-Mail yesterday morning. Perhaps the paper and ink editor thought better of it by the time the presses started running but the website team had no such reservations. Hannah Davies receives a nomination for the worst story of the campaign for her observation that:

“He clearly enjoys a good pie (and a cheese platter, and a pizza), but it looks like Prime Minister Kevin Rudd may have enjoyed a few too many in recent weeks.

“The stress of the looming election can now been seen in his jowels and double chin as he models a fuller-faced look, and according to one Brisbane nutritionist he has ‘packed on the weight’.

“A former Rudd staff member, who refused to be named, said the PM would likely be comforting himself with his favourite snack — cheese, washed down with wine.

“‘No wonder his face looks so bloated,’ he said.”

I at least have one thing in common with the Financial Review’s Jennifer Hewett— we both tend to be hidden behind a paywall. So it is with her “Expect the tone of campaigning to get lower from now on“, where she notes that Tony Abbott calls the Greens “economic fringe dwellers”.

“So he must appreciate the irony that he and Christine Milne are relatively united on his ‘signature’ policy of a more generous paid parental leave scheme.”

If Tony doesn’t, I certainly do, and it’s a pity that Hewett’s wise words are not occasionally made available to a wider audience.

Tony Wright in the Fairfax compacts looks at the opinion polls and decides “Three years later, Kevin Rudd finds himself behind Julia Gillard“.

“Prime Minister Kevin Rudd hasn’t been forced to battle the damaging leaks that all but destroyed Julia Gillard’s campaign three years ago, but he and his Labor government suddenly find themselves in a much worse position than that which engulfed Ms Gillard at the same time in the last federal election.”

John McTernan, the former prime minster Julia Gillard’s director of communications, is not nearly so gloomy as he charts in the Melbourne Age his version of a potential way ahead to a Labor victory in “Three weeks to go, can Labor still win? Oh, yes“. 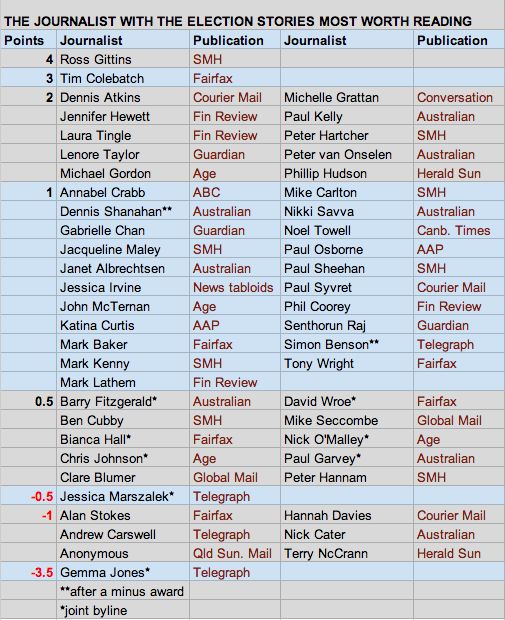 Other views: blogs and tweets of note. The word from on high:

Brings forth a daughter’s response:

For our morning reality check on how interested readers are in the election campaign: 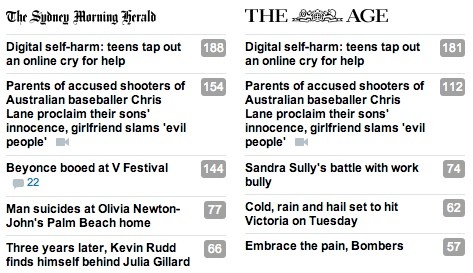 The nightly news. A refreshing change of backdrop for Kevin Rudd last night. He actually made bowls seems like fun, even if the announcement of some policy or other about elder Australians got lost among all the action.

The daily election indicator. Another day of minimal change. Labor this morning given a 13.1% chance (down 0.4 of a point), the Coalition 86.9%.

Murdoch’s praise of Abbott brings a wry smile to the lips. His track record of character assessment fails to stack up when we consider the number of his former employees either in gaol or about to be tried.

Meanwhile “conviction media despots – meddling in politics and the police/law” are floating to the surface? Like in Great Britain?