Plains, boats and automobiles: differing conceptions of the political middle

The election is revealing what both sides believe is the true nature of middle Australia. Look closer at policies like asylum seekers and parental leave to see what's really going on. 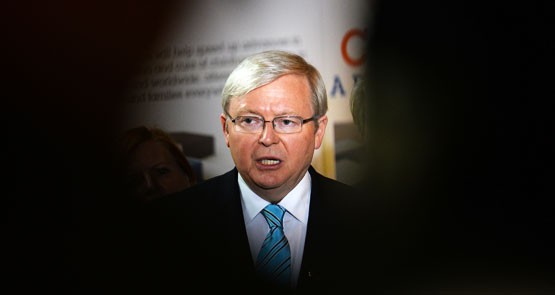 Australian elections are notionally about appealing to the centre, in contrast to, say, elections in the United States where effort is directed to mobilising a party’s base in order to maximise turnout. Here, political parties have shifted the burden of maximising turnout from themselves to taxpayers, who fund an elaborate enforcement and surveillance apparatus to make people enrol and vote (and of course for each vote political parties award themselves nearly $2.50).

To the extent that the major parties differ from one another — and they tend not to other than about which sectors to favour with taxpayers’ money — elections thus become a contest of differing visions of the centre of Australian politics, even if Vision with a capital V is for the most part missing from the contest and done wretchedly when it isn’t (e.g. Rudd’s Northern Australia rubbish).

Labor’s biggest policy announcement so far revolves around automotive manufacturing — committing additional open-ended funding to the transnational companies that employ less than 6% of the manufacturing workforce, worth $500 million out to 2020, and additional funding beyond that, should Labor improbably still be in government then. There’s nothing particularly Ruddesque about this, despite Rudd notoriously wanting to not be the Prime Minister of a country that doesn’t make things and Kim Carr being returned as Industry Minister. Supporting manufacturing jobs was a key part of Julia Gillard’s election strategy, which centred on the disability support scheme, education and supporting Australian jobs in the face of the challenge of a high dollar.

The dollar mightn’t be quite as high at the moment (although it may yet, like the South, rise again) but the Rudd’s “transition” narrative about the end of the mining investment boom has been pressed into service as a replacement for the same argument.

Manufacturing is central to Labor’s conception of itself, not merely because of the strong role of manufacturing unions, of both the Left and the Right, within the party and its history with car manufacturing, but because of the lingering mindset that manufacturing is a “real” activity in a way that services industries are not. Of course, some manufacturing sectors are more real than others — textiles, clothing and footwear, being female-dominated and poorly unionised, has rarely enjoyed the sort of support that car manufacturing has. But the baldest assertion of this mindset came not from Rudd but from Gillard in that remarkable “jaundiced eye” speech in 2011 which celebrated manual labour as innately ennobling.

This isn’t a Labor-only mindset — most Australians share it as well, even as they have embraced highly remunerative careers in burgeoning services industries themselves. Polling shows they like the idea of protecting Australian jobs from the threat of foreigners who exploit the Aussie dollar, or somehow benefit from unfair competitive practices, to sell their goods here, or who come here on 457 visas and “take” local jobs directly.

This is a perverse conception of fairness that Labor plays to, in which the citizens of one of the richest countries in the world, one of the only western countries to have sailed through the financial crisis and lingering aftermath with barely a scratch, with low unemployment and a massive investment boom that, if it has peaked, still has plenty of time yet to run, believe themselves economic victims being done over by crafty foreigners.

The Coalition has a different approach to the same mindset, one developed during the Howard years. While its paid parental leave scheme — the costing of which has all the strength and consistency of smoke — is now well-known as being a Tony Abbott imposition on an unwilling party, it was in fact Joe Hockey, latterly a smiter hip and thigh of the “entitlement mentality”, who best described this middle-class welfare approach. In a budget reply speech in 2011, Hockey defended the middle-class welfare of the Howard years thus:

“The Coalition greased the wheels of structural change in our economy with tax cuts and targeted spending so that everyday Australians felt they were getting some dividend from the mining boom which did deliver higher company taxes, higher royalty revenue and lower unemployment. The Coalition will never neglect Menzies ‘forgotten people’.”

Australians during that period had experienced rapid growth in incomes, partly courtesy of, as Hockey admitted, low unemployment. Australians were getting a dividend from the mining boom via their superannuation, via rapidly increasing property prices and via higher wages for skilled labour. “Australians have never had it so good,” Howard foolishly insisted at the time, but still he kept throwing money at voters, pandering to their sense that instead of being beneficiaries of the mining boom, they were victims.

As it turned out, [pullquote position=”right”]Rudd was far more adept at exploiting voters’ delusions that they were the victims of a colossal stroke of economic good fortune for Australia[/pullquote]. That’s a key reason he won in 2007. No politician since has dared follow Howard in telling voters they’re not victims.

The same logic is behind Abbott’s absurdly generous PPL scheme, in which high-income earners will be rewarded far more than low and middle-income earners, all funded by a tax rise for business — the sort of tax rise most voters think is victimless; indeed, most voters, even Liberal voters, incline to the view that corporations should pay more tax, not less.

And if you think about it the same logic is behind the Coalition’s attempt to regain the ascendancy on asylum seekers in the wake of the political success of Rudd’s PNG strategy: its weekend announcement of a series of draconian restrictions on asylum seekers already here, even if they are found to be genuine refugees, has nothing to do with deterring people from coming by boat, who will now under either side be sent to Papua New Guinea or Nauru. It’s an effort to publicly, visibly punish those who’ve arrived by boat, to sate the sense of outrage and affront many voters feel toward asylum seekers.

This isn’t, as many progressives insist, about racism or bigotry, but about the perceived unfairness on the part of many Australians that people from somewhere else should arrive here and enjoy the benefits of being a citizen without having “done the right thing”. Many Australians, with incomes in the top few per cent on the planet, see themselves as victims of asylum seekers: some of the most desperate people on earth are perceived as a threat to what rightfully belongs to Australians.

There’s no “boundless plains to share” as far as many voters are concerned. What’s to be shared are jobs, housing, space on congested roads. Sharing it with other Australians is tough enough — sharing it with people who are perceived to have cheated the system is an outrage. It’s that sense of affronted entitlement that the Coalition is trying to exploit with its policy of aimless punishment of asylum seekers already here.

“Australians were getting a dividend from the mining boom via their superannuation, via rapidly increasing property prices and via higher wages for skilled labour.”

…and thereby higher taxes. Not to mention royalties.

Funny, I don’t remember Keane mentioning any of this when the RSPT/MRRT debates were in full swing.

This article is grossly depressing in its accuracy. We’re entitled and angry with nary a rational thought.

I must be one of the “forgotten” people the Liberals forgot. My wife and I worked as teachers all through the years of the Howard miracle. We paid a lot of tax for not a lot of services. Enterprisingly, I worked nights teaching adults studying externally. Those Liberals sure knew how to tax that extra income. We peaked one year each having to pay an extra 1% of our gross salary in medicare levies because we made a free choice and declined to take out private health insurance. So I don’t take seriously the big wrap Joe Hockey gets for his guff about entitlements. There are the entitlements Liberal voters expect (like Austudy for their kids- viewed as beer money at Uni by the rich kids so my non-Austudy kids told me)and then there are all the wasted entitlements. But I don’t recall a lot of tax cuts under Howard. Just that 10% on nearly everything. low tax indeed.

Yes, we are the poor little victims of those people who have fled wars and dared to ask us for help under our own laws and the media have the same frigging mindset.

Taxes need to go up if we are to keep our debt in control, without destroying jobs through austerity measures. But I can’t see Abbott or Rudd pull a JFK “Ask not what your country can do for you; ask what you can do for your country”. Both parties have become populist monsters and are too scared of a backlash when it comes to visionary thinking. Increase the political term from 3 to 5 years and stop polling every 2 weeks and we might just get some politicians that don’t treat us like brain dead idiots.