Markets and stocks were down worldwide, with firms bracing for even tougher trading conditions. 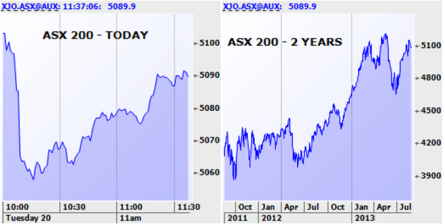 Financial sector down 1.3%. JP Morgan down on accusations of corrupt hiring practices in China.

Euro up as the ECB said that they could raise rates if inflation pressures emerged. Which they haven’t …yet.

Metals reversed yesterday’s rises. Metals down as the US$ rose. All the majors down over 1%.

US performers — ExxonMobil down for the 18th time in 20 sessions.

US Economics tonight — None (A fed Governor speaks)