No more McTernan in The Sunday Tele? Last month News Corp Australia was trumpeting that Julia Gillard’s former communications chief John McTernan had “signed” with The Sunday Telegraph as a columnist. And indeed, the Scotsman had a column in the Tele on July 21 and another on July 28. And since then nothing. Meanwhile McTernan appeared in the latest edition of The Monthly and had an opinion article in News Corp rival The Age today. Sunday Tele editor Mick Carroll didn’t respond to Crikey’s calls this morning; if he had, surely he would have quashed the conspiracy theory that Col Allan’s arrival down under was McTernan’s undoing at News. The Scotsman played the diplomat, saying he hopes to appear in the Tele again soon: “I’m being promiscuous and pitching to everyone at the moment,” he said. — Matthew Knott

Correction of the day. The Australian‘s resident Green-sceptic Christian Kerr beat up on the party yesterday, “A soft Green underbelly“, which opined that Labor could have put the Greens out of their misery by denying them preferences. Kerr went to some lengths to point out that the Greens needed preferences to get over the line in every state last time around, failing to win any seats on primary votes alone. Except that turned out not to be true — the Greens achieved a full quota in both Victoria and Tasmania. The Oz ran a correction today on page two noting the stuff-up:

But although the paper changed the story online, there is no mention on the new version (pictured below, at right) that the article was amended …

It continues a run of recent Kerr Senate stuff-ups, including this howler on August 7 in which he inexplicably wrote that a Senate quota was “one-sixth of the total state vote, or 16.66 per cent”. A Senate quota is actually one-seventh of the state vote plus 1, or 14.3%.

Do you feel lucky? In keeping with its tradition of photoshopping images of leaders as action heroes (last week was Prime Minister Kevin Rudd as Rambo), The Daily Telegraph has New South Wales Premier Barry O’Farrell in the guise of Dirty Harry this morning. Perhaps the irony of using the famous .44 Magnum-toting cop in a story about cracking down on gun violence was lost somewhere along the way …. 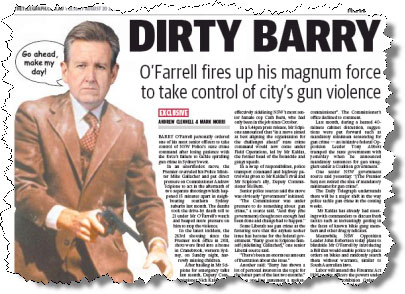 Courier-Mail prints how-to fraud guide. In the grand tradition of La Trobe University student newspaper Rabelais’ shoplifting guide, Queensland tabloid The Courier-Mail has published a stellar how-to fraud guide on page 3 this morning. A story ostensibly about increasing rorts around untraceable Australia Post cash cards on Gumtree ends up spelling out the scam for crims on the make. As the pull-out quote in the paper says: “If I was a criminal, I’d be going, ‘This is brilliant’.” 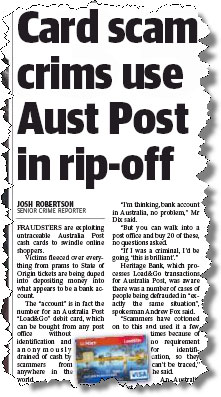 #AskBolt. Australia’s most-read columnist Andrew Bolt is conducting a Q&A session on Twitter, starting at midday, to chew over the election campaign with the Twitterati. Twits were throwing questions at the Herald Sun scribe early, filling the #askbolt stream with their unique brand of vitriolic abuse. Out of over 1500 tweets, we struggled to find one remotely serious one. This was the best we could do …

Almost all of the other tweets are slanderous, filthy or otherwise completely unpublishable, but a select few were a little clever:

Some tweeters just strayed into the plainly ridiculous:

A bear, obviously. I mean, really.

Smack bang on 12pm, the man himself appears. Bolt says he believes Labor will finish the election on about 64 seats, or possibly fewer. He is concerned about the Liberal Party’s paid parental leave scheme and wants the party to promise more cuts to the budget so it has a mandate after the election.

He also believes that the ABC should be moved closer to the suburbs to be closer to the people. He thinks it was a mistake for The Age to locate itself in the CBD, seemingly forgetting that his own Herald Sun is located adjacent to the ABC at Southbank.

He answers the Twitter question we featured above, saying he isn’t a big fan of conscience votes because they give voters less power over their politicians. He thinks we perhaps need a plebiscite on gay marriage.

Bolt missed Chris Bowen on Q&A last night because he was watching Breaking Bad with his son. Very sensible man.

By the time Crikey went to print, the Q&A was very dull. Bolt answered six questions in 20 minutes. Very few tweets are featured on the official stream, despite the advertisements. Four so far; two serious and two jokes. — Ben Westcott

Video of the day. An impressive line-up of pollies and journos took part in this engaging election-themed film clip. The band is headed up by likeable ex-press-gallery radio hack John Barrington, who went on to work for JJJ’s Hack program (he’s since left). We’re not entirely convinced about his musical prowess, however … 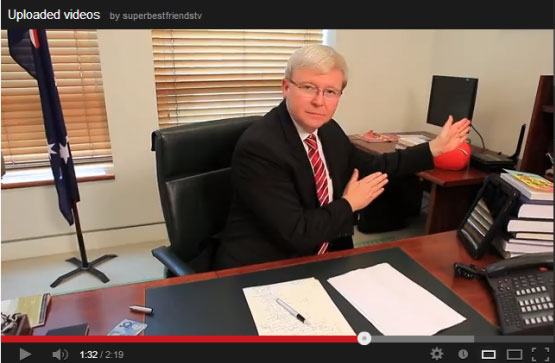 My favourite Christian Kerr piece was his dedication of 3/4 of a broadsheet page, on the front page of a section no less, to the astonishing discovery that half the numbers in a set of numbers where greater than the average of that set of numbers. On and on he went, discussing the alarming and critical political implications of this disastrous fact!

Christian Kerr, one of the few, um, journalists (?) who make Gemma Jones look worth reading.

Surely that would depend on which habitat the fight was held!