Labor has accused the Greens in Victorian of ratting on a national preference deal and deliberately running "open" tickets.

Victorian Labor has slammed the Greens after the minor party distributed “open” how-to-vote cards in key Labor-held marginal seats this morning, in contravention of a national deal to preference Labor above the Tories.

On how-to-vote cards handed out at at least three pre-poll centres and obtained by Crikey, the Greens urged voters to place their candidate first and “then number the other boxes in order of your preference”. 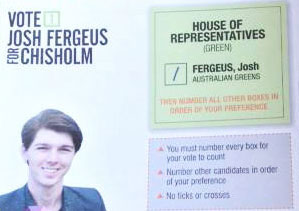 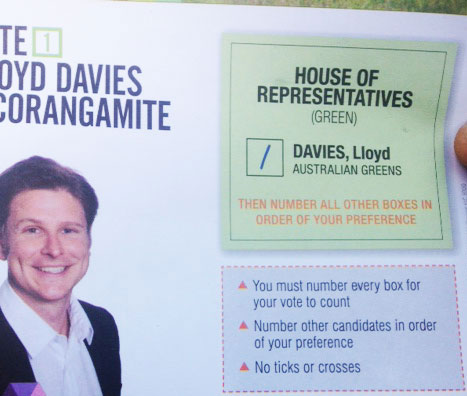 Pre-poll opened today in Victoria, and the deal between the two parties was signed on Friday morning.  The error appears to have been rectified, and the correct how-to-vote cards including Labor preferences now appear on the Victorian Greens website, but not before the offending HTVs, authorised by campaign manager Kymberlie Dimozantos, were picked up by voters. See the amended HTV below:

Crikey understands the Greens are blaming a “miscommunication” for the error. The order of candidates in Victoria’s seats was released on Thursday, but party sources say it is possible the material was printed before then, with the Victorian branch out of the loop.

Victorian ALP state secretary Noah Carroll told Crikey last night “the party can never trust the Greens ever again”, saying they deliberately reneged on the deal: “The Greens clearly cannot be trusted to keep their word. There was a clear national deal that the Greens Party would preference Labor ahead of the conservatives in Victoria’s marginal seats. Adam Bandt must rule out that the Greens ratting on the deal is not related to him chasing Liberal Party preferences or Clive Palmer’s endorsement for the seat of Melbourne.”

State Labor MPs in seats where the main competitor is the Greens, such as Brunswick’s Jane Garrett, were implacably opposed to the national deal, which requires Labor to go to the Greens first in the Senate in every state except Queensland. In Bandt’s seat, tensions are high as both sides scrape to corral preferences from minor parties to tip them over the line.

As Possum explained in detail in 2010, Greens preferences in federal lower house seats are worth about an extra 2.5% of Greens ballots transferred to Labor’s pile — usually around 100 votes and not enough to change the result. But in seats like La Trobe and Chisholm, where the contest is expected to go down to the wire, they could conceivably hold the difference between a progressive woman being elected and a conservative man.

In the state seat of Ferntree Gully in 2006, Labor member Anne Eckstein lost by just 27 votes to Liberal Nick Wakeling when the Greens issued an open ticket, a decision that arguably denied her victory. However, in general, Greens voters are loath to follow their party’s official diktats.

The Greens did not respond to a query lodged with their Victorian office. The party has previously said it would place Labor ahead of the Coalition, honouring the terms of the deal.

What a load of confected and amplified outrage this is from the ALP’s Noah Carroll.

Having managed a few Greens local and regional election campaigns in recent years, it is not at all unusual in situations where preference tickets will be issued for open tickets to be used as a stop gap for the first day or two of pre-poll. OPen tickets can be designed months/years in advance of an election, as soon as a Greens Candidate is pre-selected. Preference tickets, however, can only start to be decided upon after the ballot draw is held a couple of days before pre-poll is opened.

We received a preference ticket template on the evening before pre-poll opened. After some hassles I began successfully printing a Greens preference ticket for Lalor at 2.45am on the day that pre-poll opened on my home inkjet. I am sure the generously-funded LibLabs had many people at home agonising over whether they could get supplies of HTVs to the opening of pre-poll – as if!

Fortunately, we got through the first day of pre-poll without running out of supplies. And at 6 o’clock tonight the Greens Lalor candidate picked up the interim run of 4.5K preference HTVs that her campaign manager had fronted up to order from the local Officeworks at 7am this morning – and they are better pre-poll cards than we have ever had before. And we look forward to getting a more permanent supply from our fantastic central campaign team sometime next week.

Perhaps the muh more generously-funded Mr Carroll is unfamiliar with this kind of local grass roots campaigning. There is no centralised supply of pulped open-ticket HTVs – what a totally uniformed suggestion. Absurd comments about “ratting” may relate to the milieu in which Mr Carroll operates but they do not relate to the absolutely core values of The Greens. they appear to be directed at credulous people in the media and voting public. It’s politics where people matter far too little, unfortunately.

Greens members don’t really understand the preferencing system. The myth that a second or third preference is suppporting those candidates and their policies persists. I think the national leadership gets it; the state bodies and local branches dont.

The Greens’ constitution protects the autonomy of local branches, including the right to direct preferences. The notion of head-office mediated deals may be part of the business model for major parties, but it is not compatible with grass-roots democracy.

Look, sod this rubbish with parties taking advantage of the monstrous mess that is preference deals. Crikey readers are quite smart enough to make up their own minds in the HOR. But the enormous size of the Senate ticket is making it a real pain.
Fear not dear readers, help is at hand. Whip over to http://senate.io/ & check out
Below the line ballot paper tool for your Australian senate vote.

That way, you can print out your very own custom built HTV card.
Recommended.

As usual all you Green supporters are missing the point. Whether or not the Greens federally had the power to do so, they made a DEAL with the Labor Party, which they did not honour. That makes them all cheats, in my book. Now the Greens have the advantage of Labor preferences in the Senate, and Labor gets nothing. Not on!!