Robocalls. This reader had her Sunday night rudely interrupted by a political robocall:

“Sunday 18 August 2013, 7.20pm I received a voicemail on my landline by the Liberal party urging me to vote for Chris Crewther (Mallee) from the Liberal Party. I am on the ‘do not call register’ and was outraged by their audacity!”

Naturally our citizen journalist taped the message and emailed it to Crikey. It’s an impersonal, artificial, Telstra-style female voice talking up Crewther. We looked into the tip and wouldn’t you know it, the political parties have got an exemption from the “do not call” register (which is run by the Australian Communications and Media Authority). Have any other readers received robocalls? If you have, let us know your electorate, who’s talking and what they said.

Tips is relying on our readers to be the eyes and ears of Crikey this election, and we’re impressed — our inbox is overflowing with campaign material, gaffes and other tidbits from the campaign. Be sure to get in touch if you come across something interesting.

Banks at it again. Can this be true?

“Why is Westpac charging credit card account holders a ‘non payment’ fee even if they pay the due amount two weeks before the due date? The reason according to one Westpac branch manager is that the payment was not made ON the due date. Effectively a penalty to the customer for daring to save some interest.”

We rang Westpac’s media person but haven’t yet heard back. Any banking types know if this is correct?

Never work with children … We rather enjoyed this ad for Labor candidate for the Sydney seat of Kingsford Smith, Matt Thistlethwaite. His campaign slogan is “One of us” — good to know he’s not an alien. 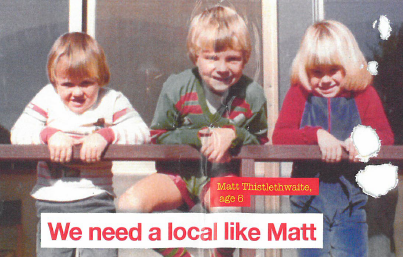 Interesting candidate names. A memorable name is valuable in politics — who can forget Tasmanian political figure Honey Bacon? — so we were intrigued to see Palmer United Party candidate Kitten Snape is running for Jagajaga in Victoria. Is this a cynical attempt to appeal to the Tumblring youth vote of Jagajaga? Ms Snape might be one to watch.

Awkward. Liberal councillor Christine Forster, who has a female partner, is tweeting her support for same-s-x marriage. Interesting, given she’s Tony Abbott’s sister (Abbott does not support same-s-x marriage and did not allow a conscience vote on the issue).

Murdoch in for the long haul. There’s plenty of interest in what happens to News Corp when Rupert Murdoch passes on. He’s aged 82, and we’d just point out that’s older than average life expectancy for Australian males (of course, Rupert is not an Australian citizen). Murdoch doesn’t seem to be slowing down with age, and his mother made it to be 103. And from the look of this tweet today, Rupert is keeping a close eye on how to achieve longevity … will he be around for decades to come?

Banking re westpac.
Its true.

My credit card account arrives with payment due on 9th of month.If I pay before the ninth and leave a balance it is not counted as being a current payment and I get late payment fee of $9 around the 28th.

Got a lecture from the bank a couple of years ago about this. “Have to pay inside the window 9th to 24th or some such”
Crazy!!

I am temporarily in Mildura for work and I got the call too. Very invasive, and I think in a country electorate these sort of US style tactics don’t work so well.

For some reason whenever I see Murdoch’s Muttering repeated here, I’m transported back to my childhood –
“Flintstones, read the Flintstones,
They’re a modern feudal simile.
From the mind of Murdoch,
They’re a page Right out of Misery…”?

This happened to me a couple of years ago with NAB. When I complained, because I’d paid a substantial sum, I was informed that I had paid outside the “payment window” and therefore had not paid on the due date. More complaints but the bank remained unmoved. However, it hasn’t happened since so I assumed policy had changed because of complaints from many other outraged customers. Clearly it hasn’t, at least at Westpac. Maybe someone should look into this.