It's more bad news for Labor as Rudd's popularity keeps slipping in the polls. Plus other campaign bites.

Campaign reading: the bad polls for Labor keep coming. As the bad opinion polls keep coming for Labor, Dennis Shanahan in The Australian comes close to declaring the contest over in “Presidential campaign bet backfires“.

“Labor’s election strategy of using the ‘popular’ Kevin Rudd against the ‘unpopular’ Tony Abbott in a presidential-style campaign has failed. The Prime Minister is going backwards and so is the boost Labor got from dumping Julia Gillard as Labor leader.”

In the light of the accompanying Newspoll showing Labor’s two-party preferred vote down to 46%, it is hard to disagree with that assessment. Another feature of the Newspoll is increased support for minor parties and independents — running at 10% compared with 6.6% back at the 2010 election. With the Greens apparently down a couple of percentage points that makes competition for the final Senate seat in each state more of a lottery than normal. Tim Colebatch in the Fairfax papers points to one possibility –“Hanson could win on back of right-wing preferences“.

“Neither party’s policy offers a real solution” — Michael Gordon of Fairfax compares boat people policies and concludes that if you are among the 30,000 asylum seekers who arrived between August 13 last year, when ex-PMJulia Gillard introduced the ”no advantage” principle, and July 19 this year, when Prime Minister Kevin Rudd announced the PNG solution, your prospects are bleak whoever wins.

In the Age’s “Rudd’s running out of time and needs to do a Keating” Michel Gordon goes out on the trail with Labor pollie Anna Burke and finds many of those approached in the privacy of their homes nominated no particular issue of concern and gave the distinct impression that they are yet to tune into the election campaign, if they are to tune in at all.

It’s not just relevance to this election campaign that makes the Saturday Herald piece “The devil’s in the detail of Treasury data” by Ross Gittins especially worth reading. It puts all those stories we keep seeing about future budget deficits into a helpful perspective by explaining what we should make of Treasury estimates.

No attempt by the Murdoch business shrieker Terry McCrann to explain what that PEFO thing actually is and the failings built into it by the Liberal treasurer who enacted it into law. “Treasury fails itself and us” wailed Terry in the Sunday Herald Sun. 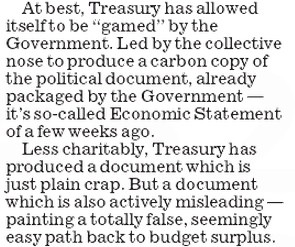 Doing the double act of writing politics for The Australian with your serious hat on and for the tabloids with a jaunty one is no easy task, as I well know, having done it for several years. Toss in giving university lectures, regularly appearing on Sky television and being an inveterate tweeter and you have to think that Peter van Onselen runs on the same kind of batteries as Kevin Rudd. From his Sunday Telegraph column: 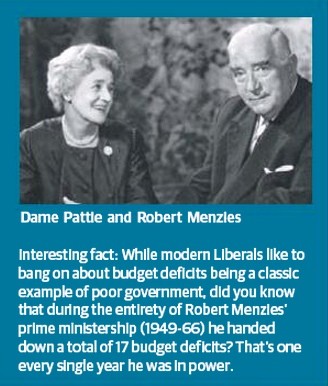 Other views: blogs and tweets of note. Just to help you put political news into perspective, consider this pair of offerings from my morning reading: 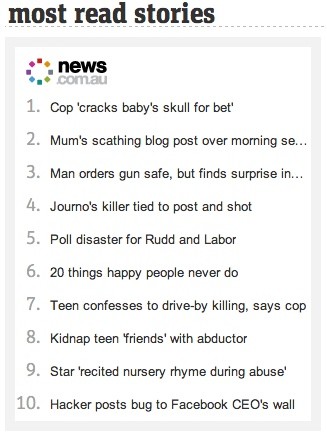 A letter to the editor of The Sydney Morning Herald: 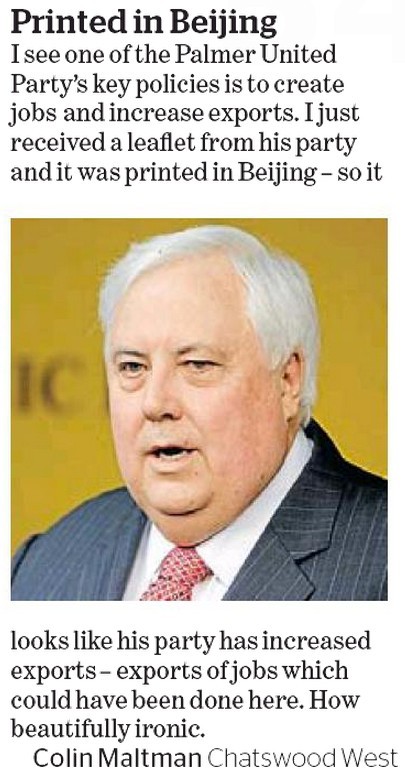 Campaign listening: One of the cleverest corrections I’ve heard on radio during Radio National’s breakfast program this morning after Fran Kelly’s always intelligent offsider James Carleton had incorrectly given the Newspoll figures as 56 to 44 instead of 54 and 46. Apologising for his error Carleton referred his listeners to a recent entry on Antony Green’s ABC election blog site:

“More e-mails are arriving about errors on the website. For my history of the electorate of Mackellar, I’ve quoted My Country and written ‘I love a sunburnt country, a land of sweeping planes’ Furious respondent calls me ignorant for not knowing the difference between plains and planes. Doh! Doh! Doh! But I live in inner-Sydney, I have planes on my mind all the time.

At a previous election I described Macarthur as covering the ‘gentile’ Southern Highlands when I meant genteel. I did recently confuse demur and demure in relation to whether the Governor-General would accept the Prime Minister’s advice, and was forced to offer the complainant a fulsome apology which was as cloying and insincere as one can make a full apology.”

There’s nothing like a light touch to make serious subjects into suitable breakfast fare. And if you were a Labor Party supporter you would have been desperate for some comic relief. The chief executive of Newspoll, Martin O’Shannessy, outlined the bad news in his findings, and then Kelly moved on to a discussion of how the robo polls taken in individual electorates were even worse for Labor. Regular commentator Michelle Grattan was a purveyor of doom and gloom for the government as she argued that the resort to negative campaigning, while it might be Labor’s only hope, did not play to Kevin Rudd’s strength. His best campaigning had always been on a positive note, which was what he promised to be.

The collective impression of all this Radio National talking was that the feeling people had about Labor before the second coming of Rudd was reasserting itself. Initially people liked the idea of the come back, but when they thought about it they still wanted to throw Labor out.

Wyatt Roy, the Liberal National incumbent in the Queensland seat of Longman, was the subject of the morning’s analysis of a marginal and sounded convincing with his explanation that it was better that people said he was young than that he was old, cynical and lazy. Labor people duly described him as being young, only a kid, and never having had a job in his life.

Finance Minister Penny Wong with her newly minted title as official Labor Party campaign spokesperson was the major interview of the morning. It was all cuts, cuts and cuts. That old favourite “where’s the money coming from” expressed in different words.

The nightly news. At last. A shopping centre stroll. Kevin Rudd did the honours Friday. And another puppy picture. The campaign is getting serious. 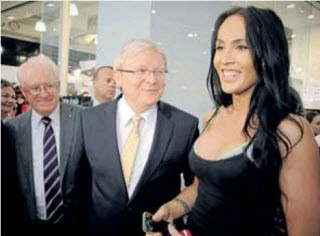 And no chance of prime ministerial s-xism with the eyes kept at eye level as he met fitness model Danii Alexis as she worked on the counter of a raw nutrition stall at Westfield Carousel in suburban Perth.

Tony Abbott pretended to play football at the weekend, having a kick around and a pass or two with some kids, but the highlight of his weekend was the success in getting the television news programs to treat his announcement of a paid parental leave scheme as if it was actually something new, which it certainly wasn’t. 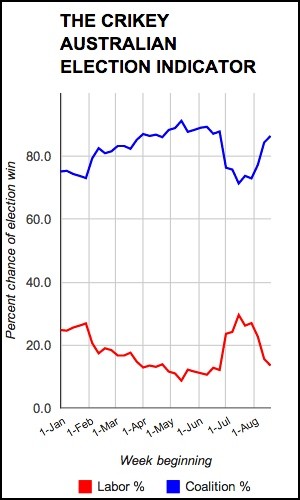 PUP’s leaflet being printed in Beijing is one of the campaign’s highlights.