News Corp charged. The new News Corporation, which includes the print assets of Rupert Murdoch’s media empire, is set to face the legal music in London over the News of the World phone-hacking scandal. The investigation of News is the most serious of the police probes currently being conducted in the UK related to operations Elveden (corrupt […]

News Corp charged. The new News Corporation, which includes the print assets of Rupert Murdoch’s media empire, is set to face the legal music in London over the News of the World phone-hacking scandal. The investigation of News is the most serious of the police probes currently being conducted in the UK related to operations Elveden (corrupt payments), Weeting (phone hacking) and Tuleta (computer hacking). Britain’s Independent has reported that London police have been investigating News Corp’s role in the phone-hacking scandal since late 2011.

“One of Rupert Murdoch’s most senior lawyers has been interviewed under caution on behalf of the company and two other very senior figures have been officially cautioned for corporate offences. John Turnbull, who works on News Corp’s Management and Standards Committee (MSC) which co-ordinates the company’s interactions with the Metropolitan Police, answered formal questions from detectives earlier this year. The development has caused pandemonium at the upper echelons of the Murdoch media empire. Shortly afterwards, executives in America ordered that the company dramatically scale back its co-operation with the Metropolitan Police.

“A News Corp analysis of the effects of a corporate charge, produced in New York, said the consequences could ‘kill the corporation and 46,000 jobs would be in jeopardy’.”

Murdoch announced he planned to split the company in June 2012. But The Independent points out the management standards committee set up by News International (now News UK) to deal with police and process hundreds of thousands of documents about the phone-hacking scandal had told the Leveson inquiry “it would be a ‘dereliction of duty’ to continue co-operating with Scotland Yard if police were planning a ‘corporate charge'”. The Independent has reported that News was told in May of 2012 that it was being investigated by London police. — Glenn Dyer

Still no Joye on AFR disclosure. Australian Financial Review columnist Christopher Joye had an “exclusive” front-page story this morning based on an interview with American right-wing warhorse Richard Armitage (who has never met an Australian journalist or politician he didn’t like): “Free ride on US defence must stop“. There was no disclosure that Joye (not in his capacity as a director of YBR Funds Management) is a former director of the Liberal Party-allied think tank the Menzies Foundation and did a paper on housing for then-prime minister John Howardback in 2003 (Liberal frontbencher Malcolm Turnbull oversaw the paper). Armitage is a former adviser to George W Bush and leaked the identity of former CIA spy Valerie Plame.

And on page 47 of the AFR this morning, Jim Molan had a small column on defence. He was described as “a retired senior officer in the Australian Army”. But he is also an adviser to the federal opposition’s “stop the boats” chain of command military three-star commander confection, announced in late July. That should have been disclosed on the bottom of his short column this morning, just as Joye’s previous links to the Liberal Party and the Howard government. — Glenn Dyer

Vote M. Turnbull, that is. Liberal frontbencher Malcolm Turnbull has been running campaign ads in print media in his electorate of Wentworth. There is no mention of the Liberal Party on the ads, which feature an M (presumably for Malcolm?) instead of any kind of party logo. Here’s to the M Party. 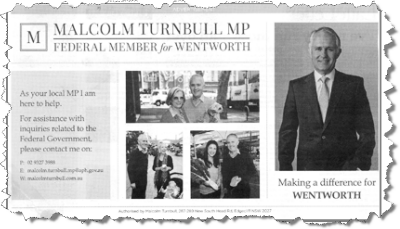 Video of the day. We’ve been waiting for this. Our friends at Taiwanese animation company Next Media Animation have delivered their take on the Australian election campaign. We especially like Kevin Rudd as a ninja and Tony Abbott injecting holy water made from the tears of asylum seekers … 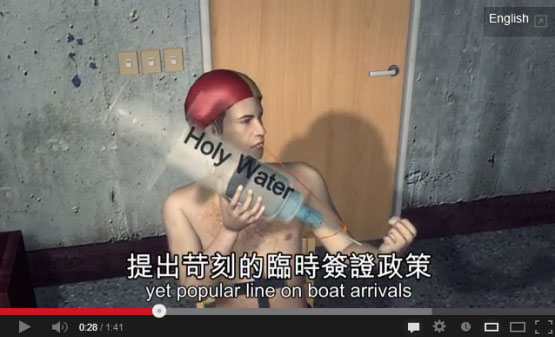 Neither Armitage nor his cheerleaders mention the blood, treasure and legitimacy Australia wasted supporting the US in Afghanistan, Iraq and Vietnam.

The Ecuadorian Embassy in London may have to add another few rooms to accomadate a few of the Murdoch clan and associates.