In La Trobe, Smyth trying to put the brakes on Liberal slide

Most people are polite at Berwick Station as they're accosted by Labor candidate Laura Smyth, but she has a huge challenge to hold La Trobe. Crikey spent the day in the outer-Melbourne seat.

It’s 6.35am on the Berwick Bypass in Melbourne’s outer south-eastern fringe, well before sunrise, and the city-bound traffic is already backed up, a blinking river of slow-moving sludge. Each morning, harried headlights queue to make the torturous trek on the Monash, from the booming growth corridor spruiked by every government since Menzies as the place to settle down with three kids and a $300,000 mortgage.

At Berwick Station, just off the freeway, La Trobe Labor MP Laura Smyth is huddled in the lifting darkness, handing out flyers hawking her party’s “$78 million” solution to the Monash problem and, in an indication of Labor’s modern priorities, tax cuts delivered during the 43rd Parliament, supposedly to take the heat off middle-income earners.

Smyth, schooled in the brutal sandpit of student politics, somehow stays chipper as the passing rush of a V/Line express service threatens to deposit her corflute and Labor’s re-election chances in another postcode.

“[pullquote position=”right”]Most people are positive … you occasionally get people who want to argue[/pullquote], but it’s the face-to-face contact that’s important,” she says, teeth chattering. The issues in La Trobe are, as ever, “infrastructure, the cost of living and education”, and she’ll be out walking the line each and every morning until September 7. “Hi, I’m Laura Smyth, your local member … hi, how are you? … hello!” And on it goes.

Smyth was one of three Kevin Rudd footsoldiers — alongside Ed Husic and Stephen Jones — clustered up the back of the PM’s first press conference in the ministerial wing on spill night. Husic was rewarded with a frontbench role, and some expected Smyth would be tapped, too. But with a margin of just 1.7%, party powerbrokers thought it better that the sophomore MP, still just 36, be deployed to the campaign frontline.

Before Rudd’s ascent, La Trobe, held by the Liberals for most of its history, was all but abandoned by Labor HQ — if the party was to lose seats in Victoria, it would be one of the first seats to fall. Sandbags are expensive and, in La Trobe it was said, pointless. But now, with a recovery possible, the resources have returned — Smyth’s double-storey Berwick office is heaving with flyers, posters and doorknocking plans, and her band of volunteers seem encouraged enough to toss off the doona at 5am to help out.

Out here, you get a sense of what Thomas Frank wrote about in a different context. While a return to Wood and the conservatives would arguably harm voters’ economic self-interest (think cuts to public services, privatisation and, in the medium term, an increased GST), many will vote for change anyway, probably due to a frustration with Labor’s leadership circus but also because of a tacit failure of successive centre-Left governments to defend and extend the social and economic gains that would deliver them prosperity. Smyth is trying to firewall herself from the maelstrom in Canberra, exploiting her local brand, and upping the face-to-face contact. Anecdotally at least, it’s paying dividends. 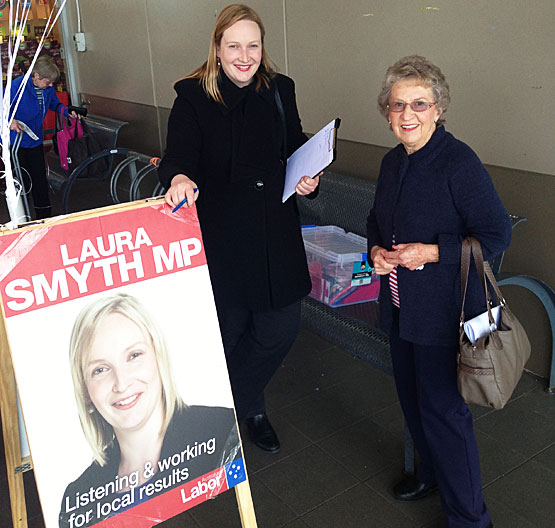 After two long blacks and a limp croissant with the campaign team at Berwick’s garish “Eden Rise” shopping centre, Crikey drives with Smyth’s campaign manager Mat Hilakari to get a sense of the massive 562-square-kilometre seat, first south along Clyde Road, once the dividing line between cows and carports, soon to be swallowed wholesale. The new estates have names like Cascades on Clyde, Selandra Rise, Livingston (geddit?) and Pasadena Clyde (with Casey Fields, in the adjoining seat of Holt, presumably filling in for the Rose Bowl).

Then, zipping to the north past old Berwick, we take in a series of hobby farms with BMW X5s in the driveway that strongly resemble something out of North Dallas — not the place Labor usually bothers doorknocking. Then up past the sublimely named Ernst Wanke Road, to the third part of the electorate: the leafy hills that include the controversial McDonald’s development in Tecoma, which Smyth opposes. Greenies up here will top up her vote with preferences. There’s a fourth zone: the established suburban areas of Boronia, some of which have been lost to Aston, probably a net gain to Labor overall. We never quite got there.

Hilakari and his boss come from a long lineage of Monash Uni Labor lefties that persists to the present day — she was National Union of Students Victorian president and student union president at Monash in the mid-1990s, and campaign volunteers like Sheldon Oski are cut from precisely the same cloth. If she were standing in the inner city, her pitch to progressives would be similar to Labor’s Melbourne candidate Cath Bowtell — to ensure there’s a person in the room to argue the case for moderation against the exigencies of the NSW Right. In the last caucus meeting before writs were issued, Smyth moved a motion openly questioning the offshore processing of asylum seekers, putting her at odds with Rudd, but in line with Bowtell.

At Parkhill Plaza shopping centre we set up in front of Coles. It’s lunchtime now so there are retirees, the recently laid-off and, as competition for the public’s attention, Angela from Envie Gym, also out pressing the flesh (“I don’t follow politics … but she looks very nice”). Gary can’t stand either side of politics but reckons Laura’s a bit of alright. [pullquote position=”right”]”I didn’t vote Rudd in, I didn’t vote Gillard in, I voted Laura in!”[/pullquote] he says, before moseying off. Darren has just lost his job in construction and wonders whether his local member can do something about it. Probably not, but Smyth gives him her card anyway and tells him to call the office.

There’s been no sign of Jason Wood, who’s under obvious riding instructions to keep hidden until election day. The windows of the Liberal office in Berwick’s main drag are covered in signage — you can’t see in and no one ever seems to come out. It’s either Tony Abbott’s small-target strategy writ large or an effort to keep Wood out of the spotlight to avoid another Jaymes Diaz debacle. “Where’s Jason?” Crikey asks several passers-by. No one seems to know, even though he held the seat for six years. In fact, its Palmer United Party candidate and One HD Fishin’ Trip host Jason Kennedy who’s far more visible, his vital preferences likely to leak back to Wood.

The scene is mirrored later that afternoon at an education forum at Emerald Secondary College (Vanessa Amarosi’s alma-mater, the foyer says) attended by every candidate — except Wood. The Greens, the S-x Party, a God-fearing Democratic Labor Party candidate and Kennedy are all there with various levels of pro-education fervour. Everyone seems to love Better Schools. Kennedy talks about Palmer’s “$20 billion” plan for the kids (“let’s speak about the white elephant in the room; there’s no point building a building if the kids can’t spell the word ‘building'”). Given this, Crikey asked, shouldn’t the micro parties put their votes where their views are, and preference the sitting member? It’s a “question for party headquarters”, of course, but one that could well decide the result.

Back up the Monash and the traffic’s grinding to a halt again at three separate junctures, still tens of kilometres from La Trobe. Every time the brakes jam, Smyth’s task becomes a little bit harder. But not so hard, it seems, to stop turning up.