Labor has clawed back to a primary vote of 40%, today's Essential Report shows, leaving the election outcome carefully balanced.

Labor’s primary vote has hit 40% and the two-party preferred gap between the major parties has vanished, leaving them balanced 50-50% less than three weeks from polling day, a new poll from Essential Research reveals.

Labor’s 1 point increase to 40% is the first time the government has hit that level since February 2011, when former prime minister Julia Gillard’s announcement of a carbon pricing scheme began her downward spiral.

However, the Coalition has also picked up a point on its primary vote to sit at 44%. The increases appear to have come at the expense of the minor parties and independents, which are down from 10% to 8%; the Greens remain on 8%.

The 40% mark is a crucial level below which Labor will struggle to win without a huge assist from the Greens, a possibility that now appears to be remote. For a time it looked like Prime Minister Kevin Rudd’s boost to Labor’s vote had topped out below 40%, but despite media claims that his campaign is flagging, Rudd appears to have found some extra juice in the tank.

And with News Corporation newspapers engaged in an all-out war on Labor, voters have identified the company’s publications as the least trustworthy media outlets for election coverage. The Telegraph is the country’s least trusted outlet, with 28% of New South Wales voters having no trust at all in it. Some 26% of Victorians have no trust at all in the Herald Sun and 21% of Queenslanders don’t trust The Courier-Mail. 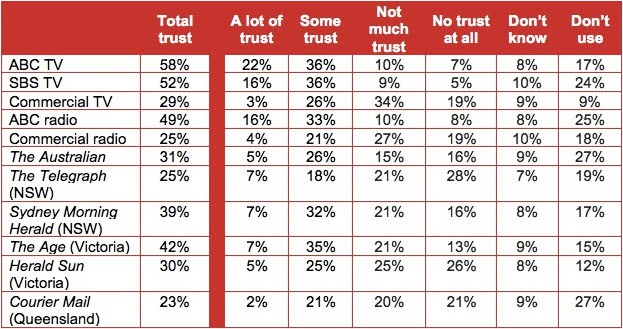 And while the campaign might have been expected to widen voters’ sense of the differences between the parties, a comparison on party attributes shows voters think the parties are broadly similar. Labor is seen as far more “divided” than the Liberals (66% to 31%) and the Liberals are seen much more as too close to business and financial interests (60% to 31%). But both score about the same on “understands the problems facing Australia”, “moderate”, “has a good team of leaders”, “trustworthy” (30% each) and “will promise anything to win votes” (65% each). Labor also leads on “good policies” by 8 points, while the Coalition leads by 7 points on “clear about what they stand for”.

Interesting commentary but it refers only to the Essential results. Most political tragics are probably trying to figure out what to think about the disparity between Essential and Newspoll (and, to a lesser extent, Morgan).

When a poll comes out leaning more to the left than Morgan (which is weighted towards the progressive side,) it’s definitely dodgy. Morgan has Labor’s primary at 36.5, yet essential claims it’s 40? Interesting. And when I say interesting I really mean ludicrous.

Takes Newspoll and essential, split the difference, and that’s probably where things sit.

Perhaps the history of polls ‘getting it right’ is undergoing transformation. Polls are conducted via telephone landlines which tend to connect older people – young voters being the only-ever-known-mobile-phone generation.

Are older people more conservative? If so, this would skew the polls whether they be Essential/Morgan/whatever.

[quote]Polls are conducted via telephone landlines which tend to connect older people – young voters being the only-ever-known-mobile-phone generation. [/quote]

Essential research is an online only poll, which leans far to the left (they were a public relations firm which worked for Labor). Morgan poll uses SMS, internet and face-to-face, another poll which leans slightly to the progressive side of things because conservative older people are less likely to use SMS and the internet.

I’ve heard that newspoll is landline only, and Murdoch has declared all out war. Which would make it the ‘right’ sides version of essential research.

Thanks for clarifying, River.