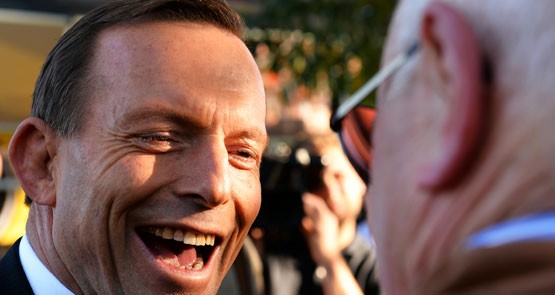 WHO WON THE WEEKEND?

Bernard Keane, Crikey Canberra correspondent: It felt like campaigns of old on the weekend, with Kevin Rudd promising a big upgrade of Sydney’s Westmead Hospital and hundreds of millions of extra dollars for the car industry off in the future, while Tony Abbott unveiled, yet again, his “free money for rich women” paid parental leave scheme, along with extensive details of its costs and how it would be funded. Well, scratch that last bit: it’s unclear how it will be funded or what it will cost, but the “free money” bit will probably be the part that sticks in punters’ minds. Abbott’s day, albeit an expensive purchase at $5.5 billion a year.

Richard Farmer, Crikey election analyst: That old leaked speech trick worked like a charm for the Liberal Party at the weekend. The papers foreshowed the words about parental leave that were to come, the electronic media duly featured the actual announcement and the pundits made it a triple whammy by then discussing its electoral significance. And all this coverage for something that was not even new — a re-announcement of an old policy. [pullquote position=”right”]The gullibility of journalists when it comes to matters of spin knows no bounds[/pullquote]. It made Abbott the easiest of weekend winners.

Norman Abjorensen, visiting fellow at the ANU and former Liberal speechwriter: Issue for issue, Abbott’s paid parental leave scheme has a certain tangible appeal to voters whereas Kevin Rudd’s decision to withhold benefits from parents who fail to have their children immunised has a certain nebulous, negative quality. It’s hard to see it as a vote winner. The Coalition’s reluctance to expose its costings to public scrutiny until the final week raises doubts about trustworthiness whereas Labor’s increasingly negative advertising suggests desperation. Gloomy marginal seat polling for Labor in NSW further darkens the mood for the government and just might trigger a bandwagon effect. On balance, the Coalition.

Dennis Glover, veteran Labor speechwriter and fellow of the Per Capita think tank: On the policy announcements you might be inclined to call it even — cars on one side, I mean maternity leave on the other. But there’s no doubt that arriving at their desks at 5:30 this morning to read the online edition of The Australian with its widening Newspoll lead, the Coalition team will be feeling like winners. There’s a strange lack of direction and cut-through about Labor’s campaign that seems to stem from a lack of any obvious and clear belief system in the grand old party of radical Australia. Thanks to Newspoll, Liberals take the weekend.

Here are promises made over the weekend and this morning. For the net result so far in the campaign, check out our online site.

Kevin Rudd: The PM didn’t only have to deal with bad polls this morning, but a loose fan belt brought the media bus to a halt on the way to Sydney. Rudd made a TV appearance on Sunrise this morning, but has been quiet since. He’s heading for the seat of Richmond in northern NSW, held by the ALP’s Justine Elliot.

Tony Abbott: The seat of Bennelong has been a popular stomping ground during the campaign and Abbott was there again this morning, spruiking the Coalition’s small business credentials. He moved on to western Sydney, where he announced a plan to enforce a five-year minimum sentence for gun-smuggling and $100 million for customs to prevent guns getting in to the country.

Christine Milne: The Greens leader is in Darwin today, where she launched various campaigns over the weekend. Milne travels to Perth tonight.

The Greens’ lead senate candidate in the ACT (and The Australian’s bete noire) Simon Sheikh has warned voters against post-election regret. 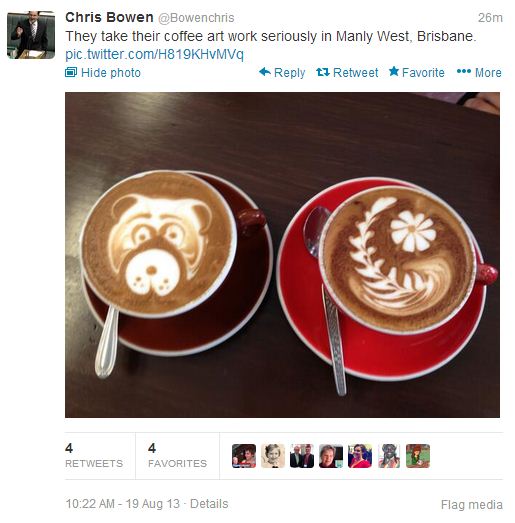 News Poll can’t be trusted. It’s all part of Murdoch’s tactic of Labor being made to look the loser.
A quick look at the Morgan Poll shows a neck and neck result. Just remember who’s the phone hacker.

I saw Abbott’s picture in The Age surrounded by well-dressed, well-nourished middle class women who live in one of the richest parts of Melbourne and a safe Liberal seat. The only sort of people he really knows anything about.

I would have been more impressed if he had talked about his paid parental leave scheme in a marginal seat surrounded by a few, say, Sudanese and Afghan women and a few Aussie battlers who aren’t going to get more from his scheme that they receive under the current scheme and had been prepared to explain why they’d get less.

Why do you journos allow him to get away with this nonsense?

Sooo, the fate of the nation is in the hands of the people whose lips move when they think, have the shoutjocks on in the ute & on site, finesse the isshus of the day over a schooner or ten then play dodge the booze bus on their way home to the slack jawed family.
Wake me in three or when the DD is called.