Rudd needs another 2%, and he’s struggling to find it

Kevin Rudd is performing as well as Labor MPs expected him to when he returned. Problem is, it's not nearly enough to win. Our Canberra correspondent sums up the week that was. 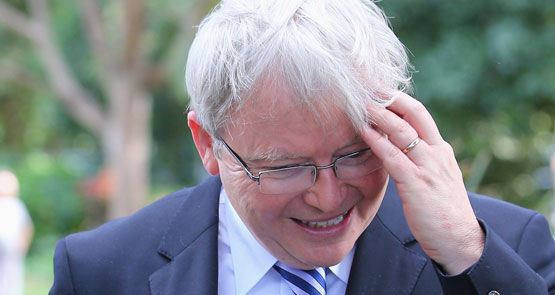 Kevin Rudd’s campaign, it appears, is in trouble. The polls are slowly drifting away from Labor. There are reports of tensions between campaign HQ and the Rudd team on the road. The Coalition campaign is slipping back into arrogance, almost mocking calls for the release of their policy costings.

Part of this, however, is the strange shift in expectations since Rudd was restored to the Labor leadership. Before his restoration, I never spoke to a single Labor MP who claimed that Rudd could win the election. What they were convinced of was that Julia Gillard was going to lead them to a catastrophic defeat, while Rudd would be likely to limit the damage. The idea of Rudd winning was a long shot, something that might have been a possibility, but not one to count on.

The media narrative, however, is that Rudd is stuffing up his chances of winning, that his alleged popularity isn’t translating into votes, that his return was just a “sugar hit”.

Well, the last Essential Report of Julia Gillard’s time in office showed Labor’s primary vote at 34%. Rudd immediately lifted that vote to 38%. In last Monday’s data, Labor was on 39%. And, despite some jiggling about after the PNG announcement with the Greens vote, that shift of 4-5 points has all come from Liberal voters: the Liberals are down to 43-44% from around 47-48%.

In short, Rudd immediately shifted about 10% of the Liberal primary vote back to Labor, narrowing the primary vote gap from around 14 points to roughly 5. And those voters have stayed with Labor for coming up to eight weeks now

The 39% figure, however, is unlikely to be enough to win except via a hung parliament. Labor needs another 1 or 2 primary vote points to be in with a chance of winning, and Rudd hasn’t been able to deliver that additional boost. Indeed, Labor’s vote might start slipping back — further polling will tell next week.

Those national-level figures of course obscure what are likely to be significant variations between the states, and we’ll look more closely at state breakdowns next week. But that means that the campaigns being run within each state will have an important bearing on how each side performs.

“The New South Wales Liberals have preselected, for the most part, a pack of prize duds in western Sydney …”

Neither side can claim a monopoly on campaigning genius at the state level. The New South Wales Liberals have preselected, for the most part, a pack of prize duds in western Sydney, a region some Liberals see as a sort of new aspirational heartland for the party. If that’s the case, they’ve done a profound disservice serving up the likes of Jaymes Diaz in Greenway, whose preselection Abbott correctly opposed. Abbott also, we know, opposed the preselection of the “s-x appeal” candidate for Lindsay, Fiona Scott. And the party appears to have taken a decision to keep its western Sydney candidates away from candidate debates where they can get away with it; Ron Delezio in Watson refused to participate in a debate he’d already shown up for when he learnt there were News Corporation journalists there. If you’re a Liberal candidate and you’re worried about even Murdoch hacks scrutinising you, then you’ve got problems.

In Queensland, however, it’s Labor’s campaign that appears to have serious problems. A regular stream of tips from within the Queensland ALP have flowed into Crikey about the shambolic nature of the campaign being run up north and about the campaign basics being done poorly (this was the party, remember, that stuffed up its postal ballot mailout in the 2009 state election, despite controlling the timing of it). Rudd’s long shot to hang on to power is all about picking seats up in Queensland to offset NSW and Tasmanian losses and the Coalition already having New England and Lyne in the bag. If Labor’s unable to pick up seats there with a return to the popular Rudd and Campbell Newman slashing and burning everything in sight, then they should chuck it in, but as yet there’s no evidence of any significant shift in Queensland.

With Abbott continuing to show signs of foot-in-mouth disease, Labor shouldn’t be out of it yet, and they scored a tactical win by routing the opposition on GST reform this week. But where’s the evidence of the work of the imported trio of Obama strategists who were going to inject some innovation into Labor’s communications and counterattack strategy? Why is the Coalition so insouciant about repeating exactly the same costings scam they pulled in 2010?

There’s still three weeks to go, but Labor needs to shake things up if it’s going to disrupt Abbott’s gathering momentum — or somehow get him to do it for them.

So are we starting to acknowledge that Labor’s problems wasn’t the backstabbing Rudd but the useless campaign managers. Rudd seems to be suffering from the same problems Gillard did.

Abbott has been simmering with controlled rage for almost six years but, this close, can he manage to contain himself for three more weeks? The minders keep him on a tight tether but I doubt there’s a leash short enough.

First non partisan story I have read in the weeks since the election has been called.