A day out in Denison, where a familiar face counts for plenty

A day out on the campaign trail in Andrew Wilkie's seat of Denison shows the power of personal connection -- and pork-barrelling. Crikey hits the road with Wilkie and ALP candidate Jane Austin in Hobart. 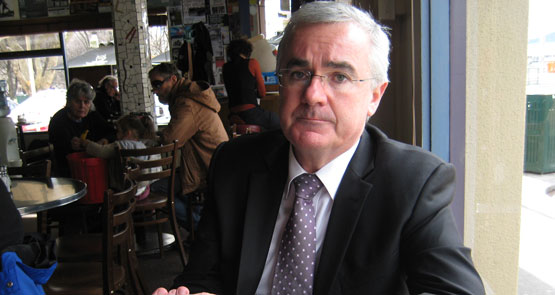 Andrew Wilkie darts around the footpath in a suit, fixing up a corflute poster with his face on it. He drills it into a fence while cheerfully fussing that Crikey may report that he does it ineptly (he doesn’t). A couple of tradies are watching intently as they sip coffee under a bleak Hobart sky. They jump in their ute and drive off — giving Wilkie a thumbs up and a smile. Wilkie beams.

And that’s part of the secret to why, as Crikey reported yesterday, this independent candidate is likely to win the seat of Denison in September: an awful lot of people know who he is. He’s the closest thing Hobart has to razzle dazzle this winter.

A sense of personal connection always helps in politics. Especially in Tasmania, where every airport lounge contains familiar faces, letters to the editor are relentlessly from the same names, and a chilly lunchtime walk around the mall yields 20 faces on high rotation. “Politics is local and personal,” Wilkie told Crikey over coffee at Salamanca.

Crikey spent the day with Wilkie and his rival, Labor’s Jane Austin (it’s not a literary tribute; she married into the surname). Wilkie is popular; plenty of passers-by recognised him, and quite a few smiled, said hello or stopped to chat. A young woman in bright yellow stockings tells him he’s “doing a great job”. He’s no Princess Mary, but three years co-wielding the balance of power in federal Parliament has made him moderately famous. Many seem to think he’s done a good job. There’s a sense in this Labor-leaning seat that the ALP took Denison for granted; Wilkie has ruthlessly pork-barrelled himself into the newspaper for three years. The locals like it.

Wilkie has transformed from an intelligence agent and expert on foreign affairs and national security, who blew the whistle on a dodgy war, to a Hobart politician with a hyper-local focus. He talks about things like getting money for the Hobart hospital. When Crikey raises issues like the process by which Australia decides to go to war, and whistleblower protection, Wilkie has answers but it’s clearly not his priority. “I’m preoccupied with the things that affect people here,” he says, and moves on to the need for larger subsidies for Tasmanian freight.

The pork-barrelling is working because Tasmania is in a hole. Unemployment is at 8.4% and rising, house prices are falling, and the population is growing at 0.11% per annum (perhaps when this Crikey reporter arrived at Hobart “International” Airport). Both Wilkie and Austin say jobs is the biggest issue. Those with jobs seem worried, those without seem dejected.

There may be a pushback against minor parties and independents among some voters, but Wilkie says “not in this electorate”. No one Crikey talks to mentions it as a negative. The difference may be that an independent MP is welcome if they’re your independent sitting pretty in the balance of power with a moneybag.

Crikey chats to Andrew Wilkie and some of the Denison locals

Economic opportunity crops up regularly among voters, although there’s a curious grab bag of answers when you ask voters what matters to them. National polling might point to “the economy,” “health” and “the carbon tax”, but Denison voters come up to everything from “I’ll vote for the Labor candidate because she left a brochure under my door” to “the medical side of Australia”. One older man in the working class suburb of Moonah looks at me askance. “Why ask me, I’ve never voted,” he says.

The idiosyncrasies of voters are on display when I go doorknocking with Austin (her team has hit 15,000 homes to date and they’re out with her today in T-shirts. It’s 9 degrees). A perky woman of about 70, dressed in neat leisure wear, answers the door in Moonah. I’m waiting on the footpath to avoid intruding, but hear every word as the woman recognises Austin and advances to the doormat.

She declares herself a swinging voter, is worried about aged care — “it’s just not enough” — and is fed up with boat people arriving while “Australians suffer”. But she doesn’t stop there. Over a few minutes, she canvasses forestry families (she’s worried about them), trade and industry going to Asia (she’s against it), military service for young people (she’s for it), and “generations of people who have never worked”. Her final concern is that people are faking schizophrenia to rort government benefits.

Austin, who works in mental health, politely stops her there and tells her this is not the case. The woman looks at her very shrewdly, then concedes Austin is probably right. Austin offers to leave her a flyer. “Oh I’ll read it,” the woman says graciously.

The Labor candidate concedes it’s an “uphill battle” trying to beat Wilkie (read Crikey’s analysis of Denison prospects). He’s in a “very visible position” and good at getting headlines, Austin says. She agrees Denison voters were sick of party politics and negativity in 2010, but says there’s a perception now that Wilkie is grandstanding.

The Austin/Wilkie relationship is interesting. They are superficially nice about each other, appear to have almost no direct contact, have quite a similar worldview (compassionate progressive Left), and are keeping a very close eye on what the other does (which streets does the rival have posters on? Who has said what to whom about preferences?). Both are quick to suspect the other camp of underhand behaviour.

Austin appears frustrated. She’s in a traditionally Labor seat and is struggling to catch an independent who’s making hay from the goodies he’s won with federal Labor money — but he’s not copping the criticism over policies and stuff-ups that a Labor MP would. “This is a Labor seat and you’re probably best placed with a Labor member,” she tells voters.

This is one of the perks of being an independent, if you can get elected. You can be a small target, focussing heavily on populist local issues while dodging scrutiny of most major national reforms — because they’re not yours. Wilkie has walked this line adroitly, and may be rewarded for it on polling day.

Does Wilkie grandstand? Yes. Did the Labor Govt ignore Sth Tasmania for decades while it was a safe Labor seat? Yes. Did politicians of both flavours fall over themselves to throw money at the marginal Northern electorates? Yes. Will Wilkie get re-elected? Yes.

If only more of the electorate would realise the value of a local member, acting in their interests rather than the Party apparatchiks and time servers.
More minority government, it’s what democracy is about!