Laurie Ferguson in trouble in Werriwa? ... ringing the gong for King Kong ... more trouble on Nauru? ...

Ferguson in trouble? We’ve heard Laurie “the Log” Ferguson might be in trouble in his historically safe western Sydney seat of Werriwa. He holds it by 6.8% after suffering a big swing against him in 2010. This from an anonymous source:

“Internal polling from within the NSW federal Labor campaign shows Labor tipped to lose the once safe seat of Werriwa currently held by MP Laurie Ferguson. The data shows what many inside the campaign have been concerned about for weeks, Laurie’s weak ground campaign is starting to hurt. Until recently the Werriwa campaign has been relying on a campaign model of good relations with local ethnic community instead of direct voter contact … the Labor Parramatta HQ has been forced to send more resources to Werriwa in an attempt to save the seat. NSW Labor isn’t exactly flushed with cash at the moment and senior Labor leaders have expressed frustration at the campaign for not following the general campaign model.”

If Ferguson were to lose it would be the end of a political dynasty — brother Martin was a respected federal frontbencher who is retiring at this election, while father Jack was deputy premier of NSW. Laurie was a protected species under ally Julia Gillard’s tenure as PM.

We put this tip to Laurie, who said:

“This anonymous analysis is typical of factional backbiting. The campaign is following conventional practices — weekend street meetings, railway distribution of leaflets, phone calls, a very high level of letterbox drops. It also relies heavily on unremitting attendance at local events and pursuit of constituent issues. This is not to deny the important statistic that of the 148,307 people in the electorate only 80,681 classify themselves as English speakers … Crikey would be advised to check their sources.  Similarly, elements predicted a close preselection ballot before my 132-11 victory.”

Curtain falling for King Kong? We heard a rumour the musical King Kong, originally slated to run in Melbourne for months more, is to close in two weeks. We put that to a spokesman, who laughed and described the claim as “ludicrous”. He said tickets were selling into October and it would run much longer than that. For those who haven’t heard of the musical version, it features an enormous toy gorilla, which is frankly alarming.

Katter meditates. Bob Katter can get a little excited when speaking on his favourite themes such as supermarket chicanery, so we were pleased to see him relaxing … 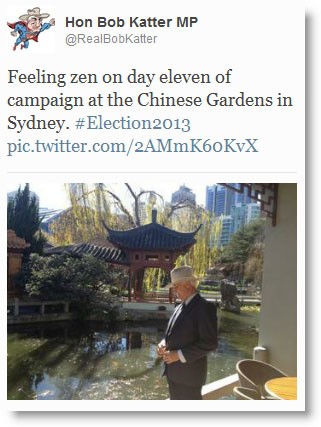 ‘Pacific Solution’. More trouble on Nauru in the last few days, huh? We’re looking into it …

Postal votes. Crikey readers have been raging against the ALP and the Liberals for sending out postal vote applications with reply-paid envelopes straight back to party HQ, so they can steal your personal information. Well, it turns out the Greens and Andrew Wilkie are doing it too. And here are some more responses from readers not impressed with this lurk: 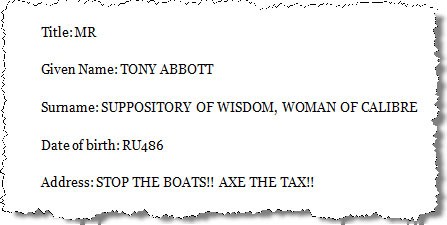