Readers of Australia's former broadsheets are also not very interested in politics. Plus other political snippets noted along the way.

What about the compacts? Yesterday election bites brought you a summary of what was being read in the tabloids — there was a complete absence of politics on the lists. This morning what people were finding of interest in the supposedly more serious “compacts”:

And yes, the election at last gets a look in — just a little one, mind you. During the day up to my bedtime the blonde bombshell came in second among Herald news site readers. That’s a serious compact for you.

Campaign reading: get ready for neg and beg. Out on the campaign trail Dennis Atkins of The Courier-Mail notes the end of Prime Minister Kevin Rudd’s pledge not to go negative. The “Final campaign arrows will see negative campaign fly” describes how Rudd responded to Opposition Leader Tony Abbott’s description of the Coalition candidate for the Sydney electorate of Lindsay, Fiona Scott, as having “s-x appeal”. After he wouldn’t buy into Abbott’s self-confessed “daggy dad moment”, writes Atkins, he waded in with both of his RM Williams boots yesterday suggesting that the comment about Scott was equal to workplace s-xual harassment and said in his Australia there was no room for s-xism, racism or homophobia.

After commenting that this was “every bit as desperate as it looked and sounded” this prospect was raised:

Meanwhile, back at Parliament House in Canberra, the serious work on election costings goes on — or rather doesn’t — as Paul Osborne, AAP’s senior political writer, reported yesterday afternoon.

“No political parties have asked for official policy costings since the federal government went into caretaker mode.  The Parliamentary Budget Office was set up in July 2012 to provide independent costings for parties and independent MPs. It’s required to publish requests for costings and responses once the government enters the caretaker period after an election is announced. However, the PBO website hasn’t published any requests by Labor, the coalition, the Greens or independent MPs – which confirms no requests have been lodged.”

One thing I like about AAP reports is that they come relatively unembellished by the prejudices of the journalist writing them. Reporting as it used to be when I was a boy. One thing I don’t like about them is that they are hard to find, their publication depending on the whims of media editors. But if you like your political news unencumbered by opinion, The Sydney Morning Herald website is a good place to start. It tends to run items like this “Abbott lines up some goals for attack” by Katina Curtis from mid-morning to late afternoon, after which the paper’s own “stars” take the space over. At least it gave us straight the daggy dad comments that so fascinated many of the Twitterati:

“Mr Abbott said his daughters viewed his remark that the candidate for Lindsay Fiona Scott had ‘s-x appeal’ as ‘a dad moment … a daggy dad moment’. Asked if she agreed, Bridget said her father was running for the position of prime minister, not dad, ‘so he can’t have any daggy sort of moments’.

“‘I think everyone’s dad is a bit daggy in their own way,’ she told reporters in Caboolture.

“Public servants told 400 must go” —  Noel Towell of The Canberra Times reveals some substance to all the talk about reductions in the size of the federal public service irrespective of what party wins the election. The federal Department of Health and Ageing, he reports, will shed up to 400 of its public servants in the next 12 months:

“Staff in the department have been told that budget cuts inflicted by the government have made the job cuts ‘an urgent task’ and they have been warned of even more pain to come.”

Mark Latham, with his serious commentator’s hat on, not the glib one he brings out for the electronic media, writes in the Financial Review this morning that the “Coalition asleep at the policy wheel“. He outlines the case that there simply hasn’t been enough political competition in the past three years to force the Liberals into a positive agenda. “This has been”, he writes, “the least scrutinised and least accountable opposition in memory.”

I am grateful to my colleague Matthew Knott for drawing my attention to “Tony Abbott’s election victory screech revealed“, a Fairfax media comment piece by Alan Stokes that I missed earlier in the week. An extract:

“Those who know me say I am a self-defecating man.

“My Royal Ablutions plan is not the suppository of all knowledge because no man is an eyesore.

“You must know the deformity of the challenges our nation faeces to remain among the world’s most effluent.”

As Matthew commented in his email to me, “Surely a new low.” You will find Alan Stokes an addition to the negative vote-getters on our honour board below.

The Abbott comment about the s-x appeal of a candidate continues to attract letters to the editors. From the Sydney Morning Herald:

From the Sydney Daily Telegraph: 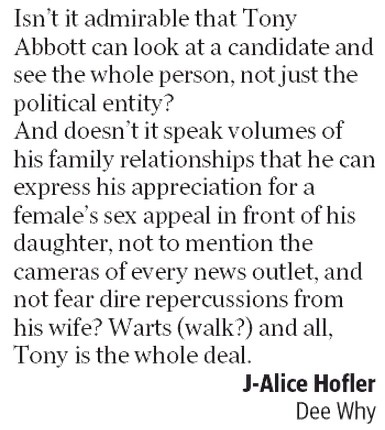 But the cartoonist on page one of The Australian probably puts it best: 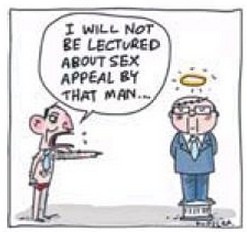 And if you like cruelly humorous cartoons, don’t miss this morning’s Bill Leak offering. I feel guilty about chuckling but I confess that I did.

Campaign listening: ABC 702 Sydney. Astronomy, the voice of Princess Anne, the Hadron collider, a report on the drawn women’s Test cricket match, some promising new research on cancer and an exhibition of Dr Who artefacts. Anything but politics. The closest Adam Spencer came to politics was a conversation with Matt Levy, director of campaigns for choice, about the Commonwealth Bank’s record profit.

Thanks so much Richard for adding insult to the injury of Bill Leak’s cartoon. Many Australian women are increasingly alarmed by this sort of stuff and by the response of male commentators. You just don’t get it do you? Whether or not you agree with their politics, women politicians deserve to be taken seriously and should not have to put up with this sort of sexist belittling. Hope you and Bill are happy to have joined Howard Sattler’s club. Shame on you – and on Crikey. I thought you were better than that.

And that’s our Dennis with his size12 double standards