No sex appeal in sight at Lindsay candidates’ forum

The candidates for the must-win Sydney seat of Lindsay lined up at a debate last night -- and one had, well, sex appeal. Our reporter was at Emu Plains to judge Fiona Scott vs David Bradbury. 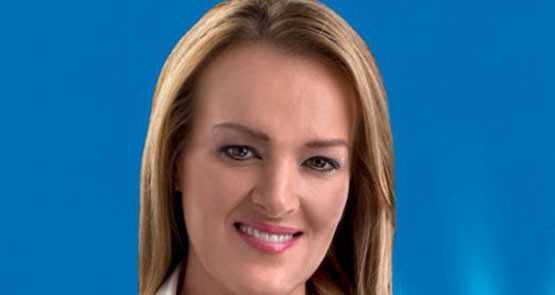 Josephine Ul, where are you? In 1987, when the young Tony Abbott was a trainee priest in Emu Plains, Josephine was his “celibacy adviser,” a job that presumably entailed keeping Tony’s mind above his waist.

In a week that has involved far too much focus on the downstairs area — including an eye-watering reference by Tony to a suppository — I think the Liberal Party should call Mrs Ul right now. Without dwelling on her past work record (the LOTO was probably not a standout pupil), any woman who can stand beside Tony at press conferences, muttering “keep it clean, you dolt,” surely now has a job.

It was, of course, Abbott who thrust the Liberal candidate for Lindsay, Fiona Scott, into the spotlight this week by describing her as having “sex appeal,” causing national outrage. After seeing Scott in the flesh at the Lindsay candidates’ debate last night, I couldn’t possibly comment because (a) I’m a straight woman and (b) Scott had somewhat defused the situation by dressing like an eastern suburbs real estate agent.

Clad in a high-neck white jacket, pencil skirt and pumps, she unleashed a Julie Bishop-death stare when the subject was raised, after awkwardly joking that it was “just a nice compliment from an old friend”.

Lindsay is a crucial seat in this election, not just because Labor’s Assistant Treasurer David Bradbury holds it on a 1.1% margin, but because the Libs, at a state and federal level, need to win it to show that they now own Sydney’s western suburbs. It was then-Liberal candidate Jackie Kelly who earned John Howard’s undying gratitude by winning Lindsay in 1996, widely seen as a victory for the aspirational, outer-suburban voter, or “Howard’s battlers”.

Kelly announced her retirement in 2007, but the Liberals lost the seat after her husband printed up fake flyers purporting to be from the Islamic Australia Foundation, urging people to vote for Bradbury, then the Labor candidate. It said that “we gratefully acknowledge Labor’s support to forgive our Muslim brothers who have been unjustly sentenced to death for the Bali bombings”. Bradbury won but is now hanging on by his fingernails.

It was a packed room at the Emu Sports Club in Emu Plains, near Penrith, and the debate was surprisingly civilised. These affairs often get hijacked by party hacks or total nutters, but last night the audience asked good questions and listened to the answers.

My favourite candidate was Mick Saunders from the Australia First Party, which opposes multiculturalism and free trade. He told the audience that Australians should “get their own backyard in order before taking in refugees”. “You ask the blind woman who was attacked at Ashfield station by a refugee what she thinks of refugees,” he bellowed. But how did the blind woman know her assailant was a refugee — the smell of turmeric? Sadly, we never did get to chat.

Scott proved her local credentials by telling us that her great-grandfather had worked for Penrith Council, grading Mulgoa Road with his horses. She attended school and university in the area (a bachelor’s degree of business) and after a stint overseas, came back to live. After that, she stayed resolutely on message, giving us all the phrases, in order, from the Liberal Party’s Real Solutions booklet. She did manage to say “that is why we have venomously fought against the carbon tax”. Well, it has been a poisonous debate.

Bradbury had the easier job — listing the ways that the Labor Party had developed the electorate with schools, hospitals, etc, including a rather mystifying reference to the vast economic benefits derived from the commuter car park at Penrith station.

What would, of course, bring vast economic benefits to the electorate would be the siting of Sydney’s second airport at Badgerys Creek, but it is universally opposed, as no one wants to live next door to an airport. Note to residents — you can’t endlessly complain about the lack of jobs and infrastructure in the area and then vote against the airport. That’s self-defeating. I live near the third runway and have learnt to deal with it. Man up.

Most of the candidates were against marriage equality, with the Catholic-educated Bradbury explaining that he had searched his conscience and also consulted the electorate. One of the exceptions was the absolutely adorable and openly gay Greens candidate David Lenton, who looked as though he had stepped out of an episode of Glee.

Afterwards, Scott gave a couple of tightly scripted answers to reporters under the watchful eye of Premier Barry O’Farrell’s senior media adviser Mark Tobin. After the Jaymes Diaz fiasco last week, when the Liberal candidate for neighbouring Greenway didn’t know his lines, the NSW Premier has reportedly sent out the experienced Tobin to western Sydney to manage the candidates.

Of course, none of this nonsense about “sex appeal” and “suppositories” would even make the news if any of the candidates had a single interesting thing to say. Day 11 of this campaign, and the general public is so thoroughly bored with the endless repetition of election slogans that even a shot of Kevin Rudd kissing a baby can make the news. If the parties want us to focus on policy, could they stop treating us like morons? Only 24 days to go …

In Penrith, Bob aside, who cares?

I reckon you’re statement that:
“If the parties want us to focus on policy, could they stop treating us like morons?

Should read:
If the media want us to focus on policy, could they stop treating us like morons?

“…it was “just a nice compliment from an old friend”.”

Absolutely priceless, this has put a connotation on Abbott’s crass remark which, hitherto, I hadn’t even entertained.

The past is another country, but it’s where I come from, and it’s worth remembering that for four decades being called sexy was a mark of approbation and power and had little to do with genitalia, its specific function or any association with gender discrimination. For a while back then just about everything was sexy at some point or another. To say the word was overused is putting it mildly. more often than not it was used reasonably appropriately to refer to charisma, something that Fiona Scott along with most politicians does not have any of. So Latham’s right about that.

The problem with the sex appeal compliment is that it trivialises the female candidate and puts her at an unfair disadvantage. It tells the world that Tony Abbott doesn’t take his own candidate seriously and that she got the gig because he fancies her. What with telling his daughter to shut up the message to women becomes clearer everyday that women will struggle to find any kind of meaningful representation under an Abbott government. Lock up your daughters.

Good on you Margot, thanks for being there (it means we don’t have to). Keep ’em coming and don’t get too despondant. Ifthe quality of the debate doesn’t thrill you, you can always become a candidate!