The Daily Telegraph has an exclusive-that-wasn't, and other media bites of the day.

Coalition cut by News. News.com.au was tickled pink with The Daily Show‘s take on Australia’s election campaign (as was Crikey), but it did not run the entire clip. While the clip on News.com.au included bits about s-xting Queensland MP Peter Dowling and One Nation’s baffled ex-candidate Stephanie Banister, it has cut out gags about Opposition Leader Tony Abbott’s weird hair kiss and Liberal candidate Jaymes Diaz’s inability to name any Liberal talking points. These led the Daily Show‘s segment. Cut for time, cut for copyright reasons or cut for political reasons? Australia decides. — Cassidy Knowlton

Online competitors kill News, too. In Killing Fairfax, Pam Williams echoed the claims of James Packer and Lachlan Murdoch and myriad analysts and experts that they had “killed” the venerable publisher by supporting upstart online companies. But these internet-based businesses have also contributed heavily to the growing problems at News Corp Australia, despite its ownership of 61% of REA Group. Falling sales, revenues and rising losses are going to dog News Corp for a while yet. The latest results from REA Group out yesterday show the damage done to News (as well as Fairfax) and why the Murdoch family company is suffering more than collateral damage from these digital businesses.

In fact, you could go so far as to say that Seek, Carsales and REA group have drained hundreds of millions of dollars from the various papers in the Murdoch empire’s Australian arm, especially papers such as The Daily Telegraph, The Courier-Mail, the Herald Sun and The Advertiser. This loss of classified ad revenues has now been overtaken by the collapse in display and other newspaper ads, and as we will see in tomorrow’s June quarter circulation data, falling sales and revenue.

In a filing with the US SEC in May, News Corp said Australian revenues fell $US265 million in the nine months to March 31. If you add in the revenue losses from 2011-12, the company’s revenues are down almost half a billion dollars. The News Corp papers haven’t been immune from the same forced unleashed by the internet. Seek and its online competitors have drained job ad revenues from the papers of both Fairfax and News Corp. Car sale ads in the News papers are very much smaller than a decade ago, thanks to Carsales.com.au (Fairfax’s Drive is a solid competitor though) and real estate advertising was attacked successfully by REA Group, but it too drained property ads from all publishers, although News’ 61% stake gives some money back. Fairfax’s Domain, which is being broken out of the group report for the first time, is giving REA Group a decent run as well. — Glenn Dyer

Exclusive watch: Tele, SMH. Scientists at the University of New South Wales have developed a new treatment that causes cancer cells to collapse. It’s a huge breakthrough that has the potential to save lives, so who can blame The Daily Telegraph for trumpeting its exclusive report on the development this morning? 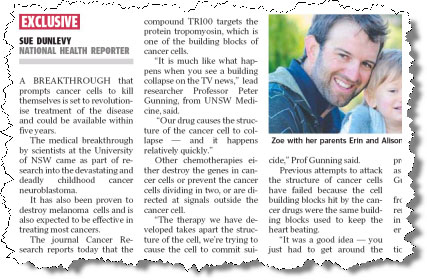 Except it’s not exactly an exclusive. The Sydney Morning Herald has a story on the same research. And not only that, it has the same quotes from the same scientist, lead researcher Professor Peter Gunning. Unless Gunning has a very well-rehearsed series of talking points, we’re beginning to suspect the quotes might have come from a press release, though neither article mentions any kind of statement. 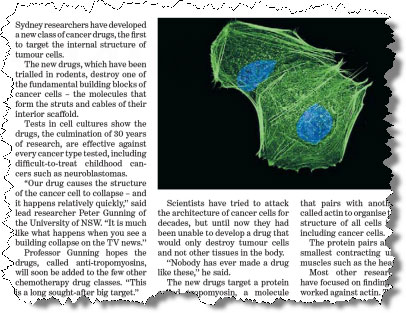 Not easy being green. The Daily Telegraph loves photoshopping Prime Minister Kevin Rudd’s head. Rudd has been a bank robber, Rambo and now Kemit the Frog. The story accompanying the photo is fairly straight, about the PM refusing to rule out a preference deal with the Greens. Is Rudd turning green to turn Greens? 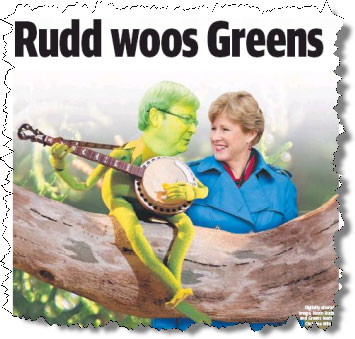