It's de rigueur to hate independents in this federal election campaign -- but Andrew Wilkie is on track to hold his Tasmanian seat, probably with the help of Liberal preferences. What happens next? 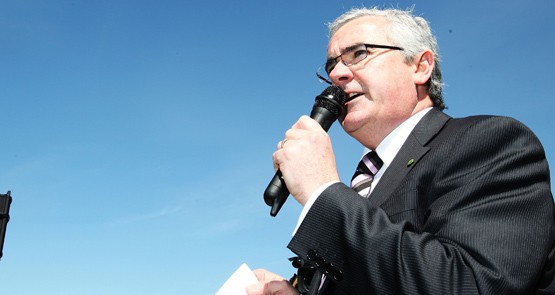 “Independent” seems to be a dirty word after the experiment of the 43rd Parliament, and most of them are on the way out. But there’s one who’s on track to retain his seat — and there’s a chance he might hold the balance of power again.

That would be interesting, because Andrew Wilkie swears he will do no deal with either major party — not even on confidence or supply — and both major parties swear they will do no deals with anyone to form minority government. We could be headed for a sulky stand-off in Parliament House.

The preference gods seem to be smiling on Wilkie, who holds the Hobart seat of Denison. While preference deals are still being negotiated, some senior Liberals in Tasmania have told Crikey they’re pushing to put him ahead of Labor. With a solid primary vote in the polls, Wilkie is likely heading for a win on September 7.

That would make him one of the few crossbenchers left standing as others leave graciously (or not so graciously). Rob Oakeshott, Tony Windsor and Tony Crook have quit, while Craig Thomson and Peter Slipper seem doomed. Adam Bandt faces a tough task in Melbourne with the Liberals preferencing him last, although Bob Katter is certain to survive. The high-water mark of eight crossbenchers this term will probably recede to two or three.

Could they hold the balance of power again? On current polls the Liberals are ahead nationally, but they could fall short of a majority. It’s unlikely but possible.

Opposition Leader Tony Abbott recently declared: “Under no circumstances will I allow the Coalition to enter into a minority government arrangement.” Perhaps Malcolm Turnbull as leader would?

Prime Minister Kevin Rudd yesterday pledged Labor would do no deals and come to no arrangements to form a minority government. But someone might have to.

Why is Wilkie likely to be returned? Denison is a quirky seat, and Wilkie was the only MP in 2010 to vault from third place on the primary vote (with 21.3%) to win. Green and Liberal preferences propelled him just ahead of the ALP candidate in this traditionally Labor seat. His margin is 1.2%.

Denison is again atypical in 2013. As Wilkie told Crikey: “It is probably the only seat in the country where there are four people in play.” He reckons four candidates — himself, Labor, Liberals and the Greens — could each get over 20% of the vote apiece, although Crikey doubts the Greens will.

“So that’s Denison: a traditionally safe Labor seat that has been captured by a charismatic independent at a time when independents are on the nose … “

Recent polling puts Wilkie in the high 30s on the primary vote (that may be overstated). The Greens are likely to poll fourth and may have stitched up a deal with independent Senator Nick Xenophon to deliver an open ticket in Denison in exchange for Xenophon sending some preferences to SA Greens Senator Sarah Hanson-Young, who desperately needs them. On the other hand, Wilkie reckons the Greens are doing a preference swap with Labor (although in that case, some Greens voters would peel off and preference Wilkie).

The Liberals will probably poll third, and there is a push to preference Wilkie. This is not because of an ideological affection for him (Wilkie is progressive/Left but describes himself as a centrist) but because they want to keep him out of State Parliament. There’s a state election next year, and the Liberals are a real chance at unseating the unpopular Labor-Green government (here’s some recent polling on federal voting intentions). Tasmania has proportional representation in its lower house. Wilkie would win one of the five state seats in the federal electorate of Denison — which could mean one fewer seat for the Liberals. Crikey asked Wilkie if he’d run for state politics if he lost federally; he says he won’t rule it out.

However, once all-powerful federal director Brian Loughnane gets involved, the plans of the state Liberals could change. A coy Liberal state director Sam McQuestin told Crikey no decision had been made on Denison. Wilkie is warning that Liberal preferences could go to Labor in the seat. Abbott has so far said he’d put the Greens last; he’s been careful what he’s said in relation to Katter, Palmer and Wilkie. “‘There is a world of difference between the Greens and as far as I’m aware just about everyone else who is contesting this election,” Abbott said.

It’s worth noting the two-party preferred contest in Denison could be between Wilkie and the Liberals as the unpopularity of the state government plays out. A poll from June last year pointed to that result. Then, of course, Labor preferences would come into play.

So if Wilkie holds his federal seat and no party wins a majority in federal Parliament, what happens next? In 2010, of course, he signed a deal with Labor leader Julia Gillard and helped deliver her a majority (he “tore up” the deal in 2012 after Labor reneged on curbing pokies). This time he’s campaigning on a theme that he would do “no deals”, and he specifies, when pressed, that he will not agree to provide confidence or supply to a major party. He says he will decide how to vote on a case-by-case basis and he would not consider becoming speaker.

Wilkie’s policies are far closer to Labor than the Liberals. He tells Crikey his priorities for the next term are safeguarding the reforms of the 43rd Parliament (the carbon tax, mining tax, etc); a better deal for the disadvantaged (higher welfare payments); and promoting Tasmanian economic growth (using federal cash to further subsidise freight). He’s much exercised over live export of animals, and remains anti-pokies. It’s difficult to imagine him seeing eye-to-eye with Tony Abbott.

So that’s Denison: a traditionally safe Labor seat that has been captured by a charismatic independent at a time when independents are on the nose — and where he’s likely to win partly because a major party, which is publicly declaring itself to be hostile to crossbenchers, may preference him because it wants him away from State Parliament.

*Tomorrow, Cathy Alexander brings you a day on the campaign trail in Denison as she tags along with Wilkie and Labor candidate Jane Austin (no relation) to see what’s on Hobartians’ minds. The answers might surprise you …

If that is correct Wilke would vote confidence or supply according to his understanding of each party’s intentions. That may not be a formal agreement, but it is easy to see how it could get very close to it.

Wilkie deserves to retain Denison. Honest, ethical politicians with a higher agenda than self-interest and self-preservation are an endangered species; any electorate which has one is to be envied.

“..independents are on the nose”?? Windsor was the most popular pollie in Parliament.

I concur that Andrew Wilkie deserves to retain Wilkie but with the LNP running the scare campaign about voting for independants and the Greens who can tell.
The sad loss is Tony Windsor, a pollie with integrity and social conscience; something sorely lacking this election.

Salamander – WIndsor the most popular in the Reps but try taking a walk through Adelaide with Sen. Xenophon – a half kilometre stroll takes an hour or more, so many people want to wish him well or just touch the hem of his garment.
Just like the late, lamented Peter Andren, Independent for Calare, increased his primary vote to high 60s before being redistributed off the map and dying of a quick acting cancer.