Why all the hang-ups over a hung parliament?

Amid the hand-wringing about another "hung parliament", it's worth remembering Australia has had almost an unbroken string of hung parliaments since 1977, write Brenton Prosser and Richard Denniss. 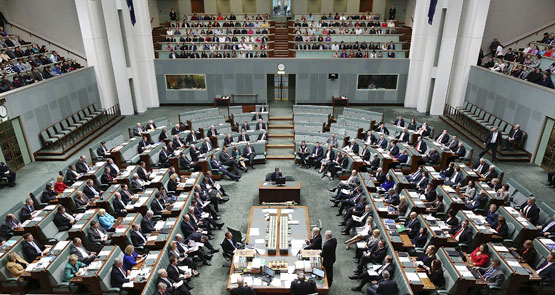 Why the hang-up over a hung parliament?

With polls showing we may be on track for another minority government, suddenly we seem surrounded by cries of “not another hung parliament”. And segments of the media and business are again raising exaggerated fears about the “risk and uncertainty” or “instability and short-termism” that will accompany such an outcome.

But the fact is that apart from a brief period between 2004 and 2007 (under prime minister John Howard), Australia has had minority government since 1977, at least in the Senate.

Prime ministers Malcolm Fraser, Bob Hawke, Paul Keating, John Howard and Kevin Rudd (Mark 1) all led “stable” governments even though they could rarely count on their legislation passing through the Senate in its original — or even amended — form. Remember the GST and the sale of Telstra? The future of both reforms hung in the balance in the upper house. As past governments have come to realise, the Senate is a key feature of our parliamentary system.

“The Australian Constitution provides the Senate with virtually the same power to legislate as the House of Representatives. Apart from the Senate of the United States of America, the Australian Senate is now generally considered to be the most powerful legislative upper chamber in the world.”

Even during the last parliament, when the balance of power was shared in the Senate between the Greens, Family First and an independent, key legislation was passed, and the nation did not grind to a halt.

Long-serving former clerk of the Senate Harry Evans noted in 2010 that there was little difference in the passage of legislation between the Howard majority of the 41st parliament and the complex Rudd minority during the 42nd parliament — it was “business as usual”.

In fact, the Senate can play an important role in tempering the more extreme ambitions of government, which might have cost the Howard government power after it was able to pass WorkChoices legislation through both houses.

The fears around parliamentary dysfunction and the death of democracy that were voiced around the time of Julia Gillard negotiating a minority government proved unfounded. According to Michelle Grattan’s analysis of the 43rd parliament, it achieved a great deal. It passed 161 more bills that the previous parliament, including reform in education, health, disability and parental leave.

In fact, the presence of a Greens member in the Lower House might have made for more stability and smoother sailing through the Senate, as the minority government was forced to negotiate with the Greens earlier in the process.

In many other nations with Westminster systems, multi-party minority coalitions are commonplace. In fact, Australia is unique in its combination of a powerful two-party system and strict party voting discipline. To look at it another way, it is the unwillingness of major party members to form coalitions around issues that gives the crossbenchers such power and creates “hung parliaments”. But in the light of the history of Australian politics, there is little reason to think that such developments will result in disaster.

Our captains of industry talk as if they want the prime minister of the day to have untrammelled powers to pass laws, but those who drafted our constitution had a much more consultative approach in mind. That said, big business should be careful what it wishes for. Historically, business groups have rushed to the Senate when a prime minister proposed unfavourable laws.

Maybe it is our business community, rather than our “hung parliament”, that is exhibiting short-termism.

*Dr Brenton Prosser is a senior research fellow at ANU’s College of Arts and Social Sciences; Richard Denniss is the executive director of The Australia Institute

I think it was far better than majority rules and hope it continues for decades to come.

Maybe the right wing media and business don’t like a hung Parliament with the Greens holding the balance of power. I don’t recall such complaints when the DLP held the balance in the Senate.

The past 3 years have been among the most democratic ever in Australia. I’m hoping like hell for another hung parliament… if only to see Abbot squirm. He He He.

Agree with consensus above – the Gillard government was stable, focus, hard working and of total probity (not a single skandale, not least because of the rigour imposed by minority status.
Interesting that Krudd & MM sing from the same song sheet about wanting to govern alone. Do so by all means,there is no technical reason the smaller party cannot “gain the support of the House” on No Confidence & Passing Supply. All else is reliant on the Indies/Green scutinizing each action.