Qld blunders for ALP? Seems there are a few pre-election hiccups for the ALP in the must-win state of Queensland … we’ve heard that “a certain rising star organiser got a please explain as to how her campaign went so awry”, and that Peter Freeleagus, the Capricornia candidate, missed a deadline to respond to a media request for an election debate so was a no-show. And did a certain candidate draw blanks when asked about the Building the Education Revolution, setting tongues wagging among powerful party insiders about whether the best people have been preselected?

Race time conspiracy. Crikey’s resident conspiracy theorists remain convinced there’s something fishy about the media coverage of Tony Abbott running the City2Surf fun run in Sydney on Sunday. Yesterday we pointed out neither his name nor bib number appears in the official results. But here’s an update; the blind man Abbott ran with does appear in the results (his name, Nathan Johnston, has been spelt differently to the media coverage). So did Abbott run the full race? A few Tips readers remain unconvinced.

Tips likes to tackle the big issues so we contacted someone at Abbott’s office, who said: “Yes, of course Tony and Nathan both ran the full city to surf.” A spokesman said Abbott’s name did not come up in the results because he was registered as a guide to Johnston, who was listed as the runner. And to put the matter to bed, Abbott’s spokesman provided us with footage of the pair running through Rushcutters Bay (they’re moving at a cracking pace).

Our verdict? Put away your tin foil hats, people. Abbott did run this race — and much faster than Ms Tips would have. And if you’re desperate to keep track of Abbott’s running career, he’s starting tweeting his routes and times (click on the image to learn more) … 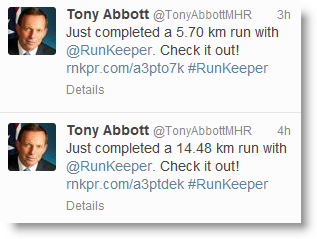 Gay marriage push. A reader was tickled pink to meet the Liberal candidate for the seat of Melbourne Ports, Kevin Ekendahl, out campaigning with his male partner (as Crikey told you in February, Ekendahl is pushing for a Liberal conscience vote on gay marriage). “We wondered if Tony knows about this?” our spy asked.

The answer is probably yes; Ekendahl has made no secret of his views on same-s-x marriage. Our Melbourne mole reckons the Liberal candidate is giving sitting ALP member Michael Danby a scare by opening a “a welcoming, open, bright office space” just down the road from chez Danby. Apparently Danby has opened the blinds in his office for the first time in years. If you spy a candidate out on the hustings, drop Tips a line. We’re also very interested in candidates who make boo-boos, in person or on social media; and we’re relying on readers to help us out.

Looky-likey of the day. Crikey loves a good look-a-like. On the left, Family First candidate for Grey (SA), Cheryl Kaminski. On the right, Debbie Rowe, wife of the late entertainer Michael Jackson. 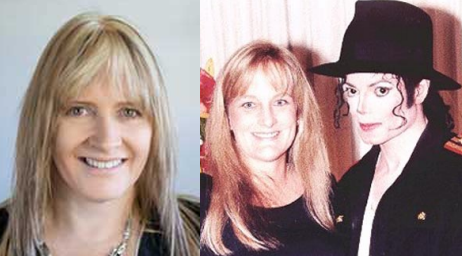 Have you spotted a striking look-alike? Email us without delay.

Getting your own back. We’ve heard some interesting responses from people unimpressed with the major parties mailing you application forms for a postal vote — with a reply-paid envelope to, you guessed it, the political party HQ (so they can harvest your personal details from the completed form). Here are some of the best: