For the challenger, it takes plenty of shoe leather -- and front -- to hit the campaign trail in a safe seat. The Citizen's Michael Roddan tagged along with one such political hopeful. 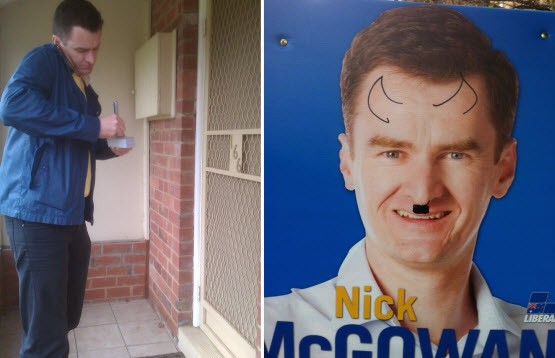 The candidate knocks on the door’s aluminium frame. He says you can always tell it’s a housing commission door by the style. The metal knocker clangs and the mesh screen beneath it rattles.

“You can’t see through the mesh so if the door doesn’t open you have no idea who you’re talking to,” he says, explaining the awkwardness of the cold call. “You can’t even see the height of the person you’re addressing. You don’t know if you’re talking above them.”

On this winter’s morning, the candidate is rapping his knuckles on the doors of state-provided housing in Heidelberg West, about 10 kilometres north of Melbourne’s CBD. “G’day,” he says, thrusting his hand towards the cautious resident on the other side of the screen. “Just introducing myself: Nick McGowan, Liberal candidate for the federal election.”

The 38-year-old McGowan is running in Jagajaga, the electorate that starts here and sprawls east. It is among the 30 safest Labor seats, and has been held by the ALP since its creation in 1984, with Jenny Macklin at the helm for the past 17 of those 29 years. Even in these days of Labor in-fighting and opinion polls that reveal record levels of voter disenchantment more broadly, McGowan’s is an uphill battle. Though not perhaps an impossible quest, he needs an 11.5% swing in order to claim victory.

“This is what the ALP calls their heartland,” he says, with a note of resignation. “I joke about it. I say: ‘you gotta be insane — partially insane — to do this’.”

McGowan recounts the very first time he knocked on a door as a freshly-endorsed Liberal candidate, introducing himself to a man in his 50s who took his introductory card but responded bluntly “I hope you lose”, before his wife emerged to slam the door in McGowan’s face. “The third house I visited, the lady visibly shuddered when I said I was the Liberal candidate, but she still took my card … that’s the start of your day.”

One of the hazards of door-knocking in a housing commission estate is that many residents do not have English as their first language, says McGowan, so there’ll be a higher number of people who are reluctant to answer the door. He says that usually about one-in-three doors are opened when he knocks. “The idea is to be meeting people,” he says, explaining the rationale behind what appears a thankless and near-futile task. “People like to see the candidate.”

McGowan is tall but his physical stature does not seem imposing. He wears a bright yellow T-shirt with his name printed in blue, pulled over a business shirt. A blue “NICK MCGOWAN” rain-jacket and a badge on his chest displaying a heart and Heidelberg West’s postcode completes the campaigning ensemble.

Running in Jagajaga requires a good dose of realism, says McGowan, but he hopes the cynicism of voters plays to his advantage. He says elected representatives in safe seats can often take the electorate for granted, not truly reflecting the views of their constituency. His mantra is that Labor has done nothing to earn the vote of the “forgotten people of Jagajaga”.

Cynical voters are one thing, but McGowan accuses his political opponents of equal cynicism, claiming that during a redistricting spat Labor “fought tooth and nail to keep Heidelberg West in the electorate” because of the suburb’s council-housed constituency. And he accuses the incumbent of never having gone door-knocking during her tenure. “Because it has been an ALP seat for so long, you don’t see them any more,” he says. As a result, voters’ issues had not been properly addressed.

“One lady has been here 60 years and never had any candidate knock on her door before,” he recalls. Another woman had responded that McGowan was the third candidate to knock unannounced — although the first two were state politicians, the former member for Bundoora John Cain and the current Member for Bulleen, Liberal Nick Kotsiras. “I laughed and said, ‘well I hope this is a good omen because the other two got elected’,” McGowan sighs. “You take a glimmer of hope wherever you can get it.”

“I’ve had a number of people in the last few weeks take me to task on every issue you can imagine.”

McGowan relates his own family story to the tales of housing troubles that greet him in the commission. Born locally, in Ivanhoe, his mother and father divorced when he was three years old. With his mother and brother, McGowan moved homes 17 or 18 times before his 18th birthday. “Every 12 or 18 months you get up and you’re off again … some weeks not having enough money for food.”

He believes that sobering experience instilled in him empathy for many of the people who he is now seeking to represent. “This is one of the first times you’ve got a Liberal who has familiarity with the stories he is hearing,” McGowan continues. “You want someone who grew up here. Jagajaga has never had a member who was born here and raised here in this seat … hopefully it is part of the appeal.”

It’s not just long-time residents McGowan hopes to charm with his story, believing he is able to find common ground with many of the African immigrants who have come to call Heidelberg West home. On joining the United Nations in 2001, McGowan was dispatched to the Republic of Congo, Burundi and a war-torn Liberia working in policy and public affairs. Later, he assisted the UN mission in Afghanistan and the Iraqi mission from Cyprus. Meeting Sarah, a Sudanese immigrant, McGowan mentions the name of one of his three daughters Aysha, “who was Mohammed’s favourite wife”, before they muse over the beauty of mosques in Damascus.

After a stint with the UN in New York, McGowan joined then-state opposition leader Ted Baillieu in 2005 as a media advisor, rekindling a party loyalty first fashioned in student politics at La Trobe University. He was previously an adviser to Jeff Kennett.

Reflecting on his door-to-door tour of the electorate, McGowan says: “You walk places that you haven’t been for years. When you were younger you rode your bike around everywhere and got to know every street and every shortcut. It has been a real re-discovery for me.”

But the task is one of grind, requiring a thick skin. Some of the doors that McGowan approaches are covered in hostile signs warding off potential knockers. Sometimes, he’ll knock anyway, confident in the message he has to sell. Truth is, many candidates, are too easily put off. “Ninety-nine per cent of candidates don’t knock,” he surmises. Often, it’s because they are intimidated and don’t know what to say when they’re challenged on unfamiliar issues. “I’ve had a number of people in the last few weeks take me to task on every issue you can imagine.”

McGowan reckons too few sitting members get into the nitty gritty of their electorate, too readily defining issues as state or federal “instead of saying ‘I’ll write the letter for you, and at least get the ball moving'”.

The opportunity to put his money where his mouth is soon presents itself as McGowan walks through Heidelberg West’s Mall, an outdoor shopping strip where takeaway food stores break up a procession of opportunity shops. Several locals talk to him about menial issues such as policing poor parking behaviour nearby. For others, public restrooms at one end of the shops are too far away: another set is needed. McGowan jots requests in a little notebook that he juggles with a stack of business cards. He insists he takes people’s issues to heart and will draft letters to council members after dinner. His rationale for doing so is articulated bluntly: “If you don’t follow it up then they think, ‘oh this guy, he’s a bullshit artist’.”

McGowan concedes there are limits to what he can achieve. “But in saying that, the most powerful thing I have is that I am a candidate. I am endorsed by the party. I use it every day. I write letters every day saying ‘look, can you help out here?'”

*This is an extract from an article originally published at The Citizen, a new publication of the Centre for Advancing Journalism at the University of Melbourne

Hopeless but it ought to be compulsory for candidates – very salutary and it would have a winnowing effect.

I live in this electorate, he hasn’t knocked on my door..well he might have when I wasn’t home.