Is it only journalists who are obsessed with the election? Turns out there was not a single political yarn among the most-read stories in yesterday's Herald Sun, Advertiser, Telegraph or Courier-Mail.

Politics-free zones. Perhaps we froth at the mouth too much at the over-the-top anti-Labor and anti-Green coverage in the Murdoch tabloids. The truth may well be that the majority of readers just ignore all the biased nonsense as they turn to things that interest them. Certainly that was the case last night with the most read stories on the newspaper web sites. 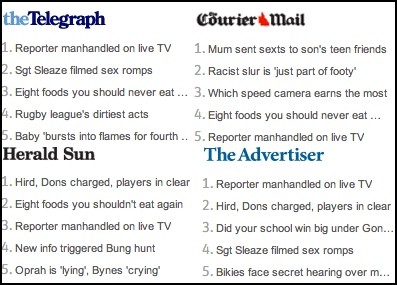 Campaign reading: modern campaigning. In modern campaigning issues are not debated, they’re closed off. Read “So much to do and so few tax dollars“, in which The Sydney Morning Herald’s Ross Gittins explains that the aim of leaders in this campaign is to make it to election day while giving as few commitments as possible about what they’ll do in the next three years.

“I wouldn’t mind so much if they were trying to stay unencumbered, able to respond to any eventuality. But actually they’re trying to create the illusion that everything they have planned will solve our problems without any price to be paid.”

Depressing but necessary reading as the election campaign staggers on, as “both sides’ belief that government debt is evil condemns us to a life of inadequate public infrastructure”.

In “Tony Abbott’s GST full stop could be just another black hole” on The Guardian Australia, Lenore Taylor take us back to the 1996 election when everyone knew the budget was in deficit but pretended to believe it was in surplus. After John Howard’s victory, he uncovered “with suitable gasps of feigned surprise, the $8bn ‘Beazley black hole’, resulting in some serious cost-cutting in the 1996 budget and the ‘charter of budget honesty’, which is why we get this pre-election fiscal and economic outlook — or PEFO — in the first place.”

“Abbott wants to be a prime minister known for both truthfulness and economic management. But he’s busy making promises that bring the first intention into direct conflict with the second.”

Tim Colebatch, economics editor of The Age, bluntly tells it like he sees it in “These numbers are a slap in the face for the Coalition“:

“You have to salute the courage of Treasury secretary Martin Parkinson and Finance Department secretary David Tune. Under serious pressure from their next political masters to produce a set of numbers favourable to the Coalition, they have stood their ground … Moreover, their medium-term projections confirm that, in the eyes of the experts who run it, the budget is not out of control … On these estimates, Australia’s fiscal position is not good, but it is manageable, and it is heading in the right direction.”

“Green slayer — Abbott to banish fringe party from lower house” — The Daily Telegraph’s Simon Benson has the election news story of the morning revealing that the Liberal Party definitely will be putting Labor ahead of the Greens when distributing House of Representatives preferences.

With the economy the major issue in this election it is no surprise that writers with an economic bent are doing so well on our journalist of the campaign honour list.

Preston Towers, the nickname given to an apartment building on Preston Street, South Penrith, that a teacher who used to live there has taken as his blogging pseudonym, was on hand when Opposition Leader Tony Abbott came to his town yesterday. His report “What is appealing about media coverage so far? It’s certainly not se-ual” describes another bland day being covered by the press pack forced to stick with the lead candidates, embedded, to use the phrase we heard during the Iraq Wars.

“It was yet another stage managed affair, of announcements, of candidates flanked by the campaign workers / staffers from the Liberal Party — all behind locked gates at Penrith Paceway and Penrith Stadium (known to some as Centrebet Stadium). The event showed, however, just how much of a gap there is between actual news reporting, gossip and the public outside the gate of these events.

“While the media were inside the gate at Penrith Stadium there was a local resident and regular Twitter user @chrissiem, taking photos outside the locked gates, tweeting what the public of Lindsay were actually allowed to see at this event.

“The only clowns who were saying the Economic Statement would be greatly different from the PEFO were Liberal Party fantasy dwellers and assorted kool-aid sippers. It is not in Treasury’s and Finance’s interest to get budget forecasts wrong on purpose to please the political party in power – which is essentially what Joe Hockey was charging they were doing.

“At some point Joe Hockey should apologise for treating Treasury with more contempt than any politician since Jim Cairns. But I wouldn’t hold my breath. If he becomes Treasurer I can just imagine morale at the Dept of Treasury will be sky-high knowing that they have a bloke who for 3 years has accused them of being incompetent now as their boss.

“But not to worry, he’ll probably call in Peter Costello to do an audit, like Campbell Newman did, so that they can get the numbers they want to get.”

Campaign listening: 3AW 693 Melbourne. You don’t get to be top-rated breakfast program in a big city without understanding the interests of the listeners. Hence the almost complete absence of political discussion by Ross Stevenson and John Burns this morning surely tell us something. As my little tabloid most-read survey at the start of these bites also suggests, there is no widespread public interest in this election campaign as yet.

In footy-mad Melbourne it was not surprising that the AFL’s charges against Essendon and some of its coaching and medical staff was the subject of the day. No surprise either than the 3AW hosts were as confused as the rest of us about what is actually going to happen. Plenty of questions but very few answers.

At least Laurie Oakes got a mention in the birthdays section, with a reflection on a half Laurie lunch taking six hours while a full Laurie lasts 12. Abbott got a brief mention on a news bulletin for his remarks about the candidate for Lindsay and a caller wanted to know if the Opposition Leader spoke a second language, with the answer given being no. And that pretty much was that as discussion turned back to Essendon and the merits of shopping at Woolworths compared with Costco.

( ..writers with an economic bent are doing so well on our journalist of the campaign honour list..)
Did you miss Q & A?? You dare to have Janet Albrechtsen on the positive side ??? surely you jest…