The market dipped slightly, despite a rise in the value of the Aussie and US dollars. 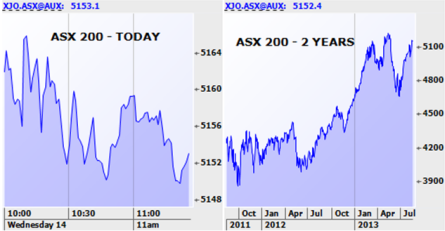 Retail sales in line with expectations prompting talk of quantitative easing tapering in September and helping the US$ to rise and sending equities down 77 early on.

Federal Governor Lockhart turned things around by repeating comments from Governor Bullard that tapering was still data dependent, implying that they had not seen enough evidence to warrant tapering yet.

The US department of justice blocked the merger of American Airlines and US Airways. AMR fell 45%.

US performers — Apple up 4.8% as Carl Ichan disclosed a “large position”.

Metals mostly up. Not a lot of movement on the majors.

The Japanese market was up 2.57% yesterday after a weak GDP number prompted talk of more government stimulus with a rumour that the PM Shinzo Abe would cut the corporate tax rate to offset and increase in sales tax.

European markets mostly up around 0.5% on better than expected Eurozone and German ZEW Economic Sentiment surveys. Greece down 1.66%.