Fairfax and News sell-off. Media giants Fairfax and News Corp are both shedding troubled assets and relocating their printing facilities to reduce costs. Fairfax Media has lost $5 million on the sale of its InvestSMART business, which it purchased in 2007 for $12 million. Fairfax had bought the 14-year-old online investment business, which allows users to buy from about 4000 managed funds, as part of an online expansion program, but it proved to be unprofitable.

Fairfax has also put its printing plant and offices in Hamilton, New Zealand on the market. The facility is the home of The Waikato Times, and Fairfax plans to lease space from the new owner of the 3.3-hectare site to continue its operations. However, the company plans to eventually lease space for editorial staff elsewhere.

News Corp is also is closing its $40 million newspaper printing plant on the Gold Coast, with 60 jobs to go. The plant prints the Gold Coast Bulletin, which will now be printed in Brisbane at News Corp’s newish plant at Murrarie. The Gold Coast plant had also been used to print copies of The Daily Telegraph, which will also be printed at Murrarie. Sources say the changes will take the total job cuts and relocations on the Gold Coast for News to around 400 since 2010. The classified call centre was relocated to a call centre in Brisbane, and the editorial and advertising staff on the coast are being moved to cheaper office space at Southport. — Glenn Dyer

Is Rudd that Sly? The Daily Telegraph has portrayed our illustrious Prime Minister as Rambo in a piece mocking Rudd’s visits to Afghanistan. We especially like the mullet … 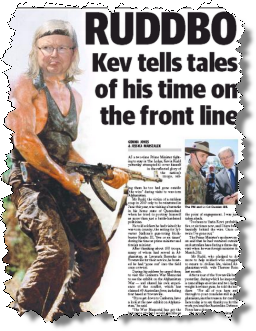 Video of the day. The Daily Show‘s John Oliver (regular host Jon Stewart is on leave) has decided American elections should be more like Australian elections — just four weeks with plenty of gaffes. Jaymes Diaz, “Islam is a country”, Abbott’s weird “hair kiss” — it’s all there …

It is a pity you couldnt have fact checked the small print – the real kicker in the ad – that the cost of living will rise fo those 528,000 and the the reference to **thousands of job losses**.

Where is the truth in either of those statements (unless you count the $20 for the log book)?

Another fact to look up — how many people (farmers, owners of unincorporated businesses, retirees, ordinary Australians who don’t have nanny employers) don’t get this break? And aren’t they supposed to be the Liberal Party’s “battlers”.

Boo hoo. Half a million people suddenly have to join the rest of us and justify tax exemptions properly. About bloody time.

I just love subsidising the lucky and now unlucky FBT main-chancers who are now asked to justify their FBT claims. It is just awful how the poor FBT recipients are being treated.