Tony Abbott got almost as much press as the Prime Minister this week, as the presidential-style campaign hits its stride.

With the election campaign underway the Broadcasting Services Act takes effect, stating commercial broadcasters must ensure balance in the amount of time they give each party; the provision are traditionally interpreted to offer equal time. It contributes to the two-horse race atop our media coverage chart, with Opposition Leader Tony Abbott pulling very close to PM Kevin Rudd in terms of mentions; just four weeks ago the new PM was generating six times the coverage of the Liberal leader.

No prizes for guessing that the pair’s TV numbers were gargantuan following Sunday night’s leadership debate, and while some hold that the winner on the night was host David Speers, it was variously scored a win to both participants, depending on who you read, watched or listened to.

Interesting also to see our print media weighting places former prime minister Julia Gillard back into third spot overall this week. Were her measurements taken on TV, radio and internet alone she’d be sitting down in around 12th place.

Other movers include Anthony Albanese up into fifth having debated the NBN against Malcolm Turnbull on ABC TV’s Lateline; Queensland Premier Campbell Newman widely reported for attacking the Peter Beattie appointment; Craig Thomson, who is running against John Singleton-backed cricketer Nathan Bracken; and WA Treasurer Troy Buswell for handing down his budget surplus.

And once again only four federal Liberal MPs and a green make our list, demonstrating the government has the conversation back on its terms at this stage of the game. 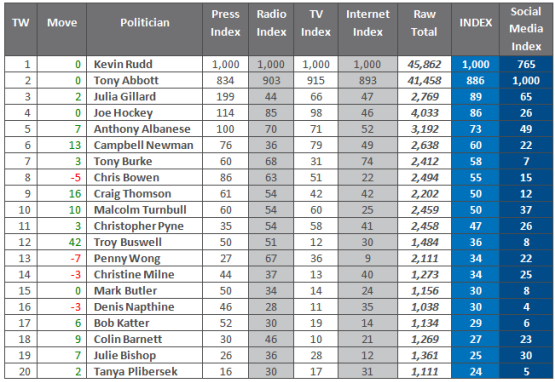 First time in quite a while that we’ve seen Tony Abbott beat the sitting PM for social media coverage, but unfortunately for him much of the messaging was vitriolic toward him following the debate.

As the Essendon story heads toward being the biggest of 2013 in coverage terms, the Brisbane Lions coach was quietly sacked yesterday.