Get Fact: is the car industry right on fringe benefits changes?

The car industry claims in press advertisements that changes to fringe benefit tax rules could "directly affect" 528,000 Australians. Are they right? Crikey puts it to the test.

The latest mining-tax-style campaign has kicked off this week: the Australian Salary Packaging Industry Association’s crusade against changes to fringe benefits tax on workers’ vehicles (here are the members of the ASPIA). 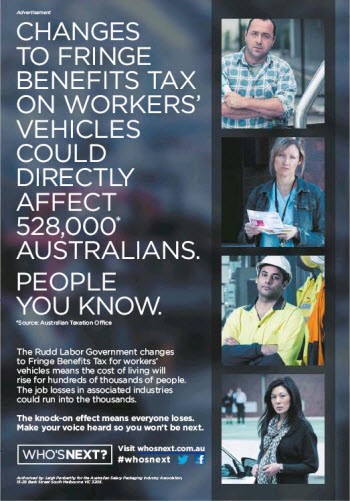 So does this stack up?

The industry’s figure comes from the Australian Tax Office, which estimated in 2011-12 there were 528, 203 statutory (ie: non-logbook) car fringe benefits. The ATO stresses this is only an estimate. It also includes fleet cars (which the government insists won’t be adversely affected by the changes) and FBT cars owned by the same person. But some tax experts have claimed the true figures could be even higher because FBT bills rounded to zero don’t count.

The 528,000 figure is certainly higher than the government’s estimate of 320,000 people affected by the changes. The government says this figure is based on Treasury and ATO data, but has not released the advice. This number does not include those driving cars provided by their employers.

The number of people salary sacrificing cars is a murky issue, and the Salary Packaging Industry Association has certainly picked a high-end estimate for its ads. The changes also won’t come into effect until people sign a new salary sacrificing deal or re-negotiate a lease. But the 528,000 figure is based on publicly available ATO data and has not been taken taken out of context dramatically.

Why voting for Trump and Hanson is good for democracy

This microfact might be mostly true, but the bigger picture is that over 10m other taxpayers get robbed by this half a million group of tax dodgers.

Fact checker needs another meter, i.e. gauge of how narrow and cherry picked a measure is.

mrt;
You are Oh so right. The FBT concessions were a sop to an influential mob of tax payers and was written with such laxity at the time to virtually cover any one that needed a bike,car or scooter to get their morning tea.
The general trend towards the corporate and business tax collection is down throughout the OECD and Australian tax collection is the fifth lowest of those group of countries (35).
If genuine tax collection, according to the statutes was affected, then we wouldn’t be discussing the changing of the most regressive tax on our books, the GST.

mrt is right – why should salary paid in kind (in this case, running a car) be treated more favorably than salary paid through the PAYE system. And should we pay any attention to people who claim that their car is being used for work purposes complaining about having to justify their claim?

One ad you won’t see – a corporate executive polishing his top-range corporate car, thanking Australia’s taxpayers for helping him pay for it.

After the election, we should go through the tax rules and eliminate all these types of rorts.

Salary sacrificing s tax rorting pure and simple, and all of it should be illegal. I note the Right goes on and on about “inefficient”taxes (ie any tax they can’t dodge) but apparently love the redtape involved in convoluted, artificial schemes like family trusts, salary sacrficing etc. Tax whingers.