The Daily Telegraph is still campaigning hard for the crown of the worst beat-up of the election. Plus other campaign bites noted along the way.

And the debate winner was: A clear result in our readers’ poll to find the winner of Sunday night’s election debate. ABC television’s Lyndal Curtis is clearly on top, with good showings also by The Sydney Morning Herald’s Peter Hartcher and Sky News‘ David Speers.

A long way behind and clearly at the bottom of the rankings comes the Daily Telegraph’s Simon Benson.

Campaign reading: Gemma keeps showing her class. Another nomination for worst beat-up of the campaign this morning for the Daily Terror’s Gemma Jones:

She really has a way about her as she manages to treat a Facebook of Prime Minister Kevin Rudd’s son Marcus fooling around with mates with a cigar in his mouth as if it were an example of Labor hypocrisy. Then, just for good measure, Jones and her co-author, Jessica Marszalek, manage to find an excuse to liken Marcus Rudd to Charles Manson.

Relying on census data on the number of people who declared themselves to be in a same-sex relationship strikes me as a very chancy base on which to develop a theory on the political implications of Rudd’s promise to hold a parliamentary vote on the question if he is returned as Prime Minister. Yet quoting ratios of legally recognised married couples to same-sex ones is the basis used by The Australian’s Nick Cater this morning in “The empty pot of votes at rainbow’s end“. You will get the flavour of the article from this extract: 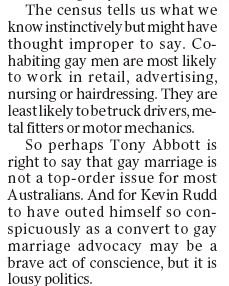 Lousy politics? Says who? If I know anything at all about Rudd when he is in electioneering mode it is that he does nothing without first considering the impact on how many votes he will receive. Cater joins those with a negative vote on our campaign journalists honour board.

The powers-that-be have put her behind the paywall, but that’s no reason to exclude Jennifer Hewett from our daily list of stories worth reading. Her Financial Review offering this morning “And now, politicking skills plus” makes it worthwhile seeking out a friend rich enough to afford a hard copy. The intro at least is free:

“The government doesn’t need a political focus group to know the promise of ‘high skilled manufacturing jobs of the future’ appeals to voters. Creating the right environment to allow those sorts of jobs and businesses to flourish is harder to deliver.”

In recognition of the performances by Gemma Jones I have reversed the order on our journalist of the campaign honour board this morning so it reads top to bottom from worst to best.

Campaign listening: ABC 105.7 Darwin. They are speculating about “the build-up” in Darwin — the time between the end of the dry season and the arrival of the wet one. It’s coming soon, according to 105.7’s Julia Christensen, with temperatures and humidity rising without the relief provided by afternoon rain. A time for Northern Territory old-timers to laugh at the discomfort of southern blow-ins. And it is clearly not a climate conducive to thinking about things political. Apart from brief mentions in the half-hourly news bulletins and on AM, breakfast radio this morning was pretty much a politics-free zone. Far more interesting to listen to a little live Tibetan throat music provided by visiting monks and a discussion of the possible arrival of an apartment block on a barge that would be moored in the harbour to accommodate the next influx of blue-collar workers.

The only real news I can tell you that came from my listening is that euthanasia advocate and Senate candidate Philip Nitschke has been campaigning in Alice Springs. A bit unusual that because he’s standing in the Australian Capital Territory not the northern one. Oh, and I nearly forgot, drinking stringy bark tea is a wonderful treatment for cold and flu symptoms.

Herald Sun readers have a say on that debate. 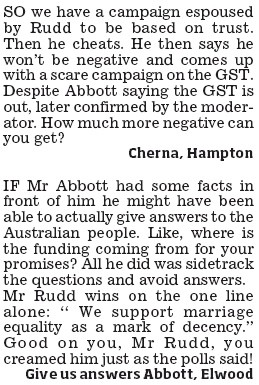 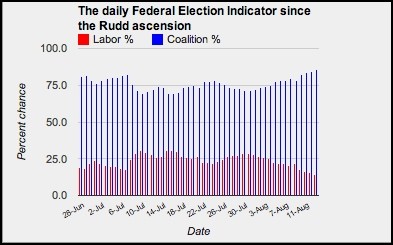