The Pre-Election Economic and Fiscal Outlook reveals virtually nothing new compared to Labor's Economic Statement. Now it's over to the Coalition. 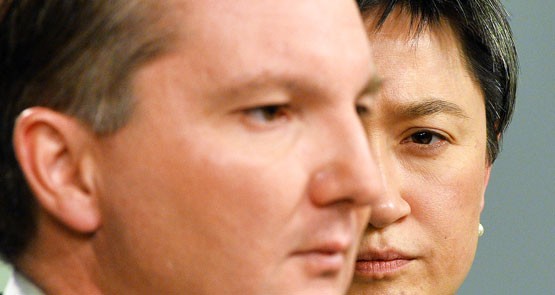 Well, as conspiracy theories go, it didn’t last that long. For the last couple of years, the federal opposition and its cheer squad in the media have been saying the government’s budget numbers and growth forecasts couldn’t be believed, that Treasury had been corrupted by Labor and was producing numbers to fit Labor’s political agenda.

It never made a whole lot of sense, as Treasury in fact kept revising down revenue forecasts, requiring the government to slash spending and lift taxes, right up until the eve of the election. If Treasury had been corrupted by Labor, it had a funny way of showing it.

Now Treasury and the Department of Finance have produced their own independent assessment of the fiscal and economic environments, free of the corrupting influence of Labor, in the Pre-Election Economic and Fiscal Outlook. The result is a document that varies only marginally from the Economic Statement that Chris Bowen and Penny Wong released just over a week ago, primarily in the fractionally smaller deficits it forecasts for this year and 2014-14 and 2016-17. And the story it tells is the same: the economy is transitioning away from a mining investment at a time when global economic growth “remains challenging”, and this transition “may not occur as smoothly as forecast.”

Thus, its predictions for growth, unemployment, inflation and nominal growth remain the same as the government’s.

Maybe the Coalition can argue that Labor tried to corrupt Treasury, but it was too incompetent to do it effectively.

With Treasury’s and Finance’s best guess about the state of government finances and economic growth over the coming years, the Coalition now has an independent basis for explaining the great mystery of its economic policy — just how much tighter, or “better”, as Opposition Leader Tony Abbott put it last week, will its budget bottom line be given the economy is growing at below-trend levels, despite the government delaying its return to surplus and the Reserve Bank setting interest rates at historic lows. Abbott himself admitted during Sunday night’s debate that revenue was “under pressure”, an inescapable conclusion both from PEFO and from last week’s Western Australian budget, in which a Liberal government had to forecast deficits and increasing debt despite the west enjoying an historic mining boom.

The Coalition’s fiscal policy is fundamental to the election even if few voters understand it: will the Coalition, driven by its own rhetoric about debt and deficits, crunch the economy by cutting spending even more than Labor did last financial year, or will it make the same sensible choice that treasurers Wayne Swan, Chris Bowen and Troy Buswell have all made, which is to accept that some short-term deficits are more appropriate than chasing a surplus for the sake of it in an under-par economy?

Compared to that, the issue of how the Coalition pays for all its spending — on carbon price compensation, the increase in compulsory super, restoring the fringe benefits tax car rort, the company tax cut — is less important, although indicative of whether it takes ex-treasurer Peter Costello’s idea of proper fiscal accountability in an election context seriously. With hired accountants, $10 billion gaps and last-minute announcements, the Coalition certainly didn’t take it seriously in 2010. Now we get to see how seriously it will take it this time around.

At last. The final stone wall demolished that was preventing the Liberal party to release to the public its mother of all financial, budgetary, country saving, long term road map for the future. Its been three long years in the making so it should be a ball-tearer!

And if there is very little difference to what they had already known, it should take no time at all to unveil their grand plan.

I can’t wait to see how the Libs are going to explain their ridiculous economic policy – if any voter is still apying attention it should be a game changer – but I think all the swinign voters read News Ltd so Abbott we be free to wreck the economy.

game changer? given today’s announcement via the NAB Business Sentiment survey that we are at 4 year lows (May 09), the ALP must only be worried about stemming the loss of blood at the election, not winning it.

the mystique around the coalitions economic policy is no different to Kevin07’s performance. Kevin ‘me too’ Rudd, if only we could turn back time!

I noticed on QandA last night that there still is an air of verbal loophole when denying a change to the GST. The audience reaction to Pynes ducking and diving was testimony to that. That might be the delay in the release of their policy – after seeing the reaction to a hint of rise in GST, they now have to re-formulate the whole structure???