The wait is finally over: the ABC's controversial fact unit is about to go live. That and other media tidbits.

Aunty unleashes the fact-checkers. The ABC is preparing to launch its long-awaited fact-checking unit this week. ABC current affairs boss Bruce Belsham confirmed the imminent launch of the unit, known as ABC Fact Check, to Crikey this morning.

The ABC’s first fact-checks will be closely scrutinised by political parties and media outlets given the sensitivity to even the slightest hint of ABC bias. Coalition frontbencher Eric Abetz launched a tirade against fact-check editor Russell Skelton earlier this year over tweets criticising Opposition Leader Tony Abbott and the Coalition. Skelton, formerly of The Age, has since stopped tweeting. ABC Fact Check will compete against Peter Fray’s PolitiFact (which has teamed up with Fairfax and Channel Seven) and The Conversation, which uses academic experts to test claims made by public figures.

Fact check presenter John Barron (known to viewers of The Drum and Planet America) will appear in a permanent TV segment during the election campaign, with radio opportunities to follow. The unit will have a strong online presence, with an emphasis on social media engagement. The unit has been funded as part of a $10 million ABC budget top-up. — Matthew Knott

ABC wage stoush almost over. The unions representing ABC workers have recommended staffers accept the ABC’s final three-year pay offer. As Crikey revealed last month, the ABC’s final pay offer comprises pay rises of 2.6%, 2.45% and 2.5% over years one, two and three respectively. Staffers will also receive a $500 upfront cash payment. The Community and Public Sector Union and the Media Entertainment and Arts Alliance believe this is the best the ABC’s more than 4000 workers can hope for in the current climate.

The ABC’s initial pay offer — 2% per annum over three years — was rejected by both unions. “The CPSU and MEAA believe this is a good agreement in the current environment and ABC workers will be better off overall,” CPSU national president Michael Tull told Crikey.  “It’s now time for members to cast their votes and have their final say.” —Matthew Knott

Herald Sun buries the bleed. You’d think Australia’s highest-circulation daily newspaper would be crowing when its snared a scalp — in this case Hotham Labor preselection victor Geoff Lake after a front-page hatchet on Saturday led to Kevin Rudd kicking him off the ballot paper. As Crikey explained yesterday, News had taken the bait after a month of background briefings from disaffected locals. 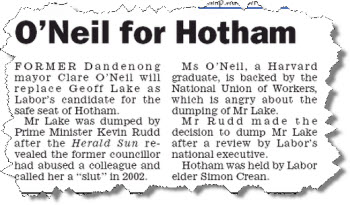 Today, the paper buries the news that Lake has been replaced by good friend and former Dandenong mayor Clare O’Neil in a four-par brief in the no-man’s land of page 11.  — Andrew Crook

Front page of the day. A stark image on the cover of French publication Liberation on the latest massacres in Syria references the famous Jean-Paul Sartre play Huis Clos, or No Exit, about three people trapped in hell  … 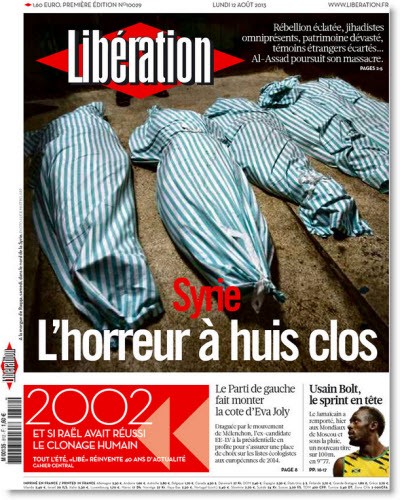