Here’s looking at us: The Australian War Memorial

The first of the T2T series on Australian institutions in Canberra

If you stand in the entrance of the Australian War Memorial and look out, you’ll see a corridor of red asphalt and grass running like a ribbon linking to the old and the new parliament houses. The square planter boxes there are meant to embody the military. The trees crowding the sides are the Australian people. The lake you can see is the same distance from where you stand as the ANZACs gained at Gallipoli. So I’m told. Whether these facts are reliable or not is perhaps not the point. The point is that this is a zone of high art and deep symbolism and war is supposedly elevated and justified through it. This sense continues as you take in the memorial and the adjacent museum.

It’s beautiful and poignant to gaze upon the Roll of Honour, the embossed names of the war dead, the jostling poppies placed by those remembering. Beautiful and very sad. The sense of so many lives lost, often horribly, in pain, away from home, is palpable. Indeed, we should remember them and perhaps even honour them. But how? Should we see them, as the War Memorial encourages us, as young men and women sacrificing all for freedom and future generations, or as pawns in a series of often senseless forays by governments and political elites which may not have needed to occur in the first place?

The truth is that those who died cannot be so easily categorised. They are all of the above and more. But, there is a means by which many of these elements can be brought together to incorporate a more holistic picture of the nation and its people at war: context. And to those charged with carrying out the War Memorial’s modus operandi, context is of limited value. If truth is the first victim of war, then perhaps context is the first casualty of its memory.

The mission of the War Memorial is, according to the relevant Act of Parliament “to assist Australians to remember, interpret and understand the Australian experience of war and its enduring impact on Australian society.” You would think that might suggest more of an open-ended approach, one which isn’t afraid to question war and its implications, to encourage debate over its ultimate value and to consider whether wars past and present are valid beyond the politics that often drive them.

How successful is the War Memorial in manifesting the fullest sense of its statute? Let’s take a look around the exhibits. Wars dating back to the 1880’s Sudan conflict are covered here, and this is meant to suggest a comprehensive coverage. Certainly, every significant international action involving Australians in a official capacity is covered. But, despite the historic scope, context is hard to find. The War Memorial fails to make it clear, for instance, that the pre-commonwealth troops sent from NSW to Sudan were on an errand driven as much by colonial and Christian arrogance as any humanitarian impulses. The context gap continues from there.

I was told the memorial was only required to cover overseas wars, which is a convenient means of de-humanising the Other Side and with super-humanising Our Boys. Examining wars within Australia would only emphasise that war has no winners, if only because the losers are among us. As Henry Reynolds has made clear (most recently in his new book Forgotten War), indigenous Australians fought bravely, harshly and often successfully against white colonialists especially during the nineteenth century. This is largely unknown and is ignored at the War Memorial. Failing to commemorate the sacrifice of indigenous fighters denies them the same honour given to those who have fought for ostensibly the same purpose as those in uniform: the protection of Australia from invasion.

Such vacuums suggest the War Memorial is more concerned with documenting the lives and deaths of war’s participants than with the actions they fought. Personalising history is one thing, and it’s often useful, so they may have a point. Also, access to non-Australian combatants may be limited and too complex and, in the case of indigenous warriors, almost (almost) non-existent. Perhaps its just too hard.

But, if we cut the War Memorial some slack here, it’s difficult to be anything other than critical of the character of the displays themselves. Another contextual failure is in glossing over many of the realities of war.

Despite an apparent endeavour to not celebrate victory, the War Memorial can be guilty of celebrating – or at least assuming the necessity of – the act of war itself. Parts of the memorial are like a fun park. You can be in the trenches, in a navy ship’s bridge, and watch a spectacular Peter Jackson-produced short film about fighter pilots in WWI. It’s shamelessly loud, exciting, fun and gung-ho. It’s hard not to see it as an kind of imprinting. Squealing kids are a sign that something is missing here – that war and fun go together. While victory is not directly exalted, it seems the message is that that war can be ok. If you win. Even if you die and win you can find honour. Dead losers stay silent in their unmarked graves.

And what of the after-effects of war; of men and women traumatised on returning home? What of generations of Dads especially who never came back to their families despite coming home, who left too much behind to ever put the pieces of the lives back together again? What of the numbers of casualties in war who are the victims of sexual diseases (a vast number) and of their victims? What of civilian casualties, an increasing phenomenon in the 20th and 21st centuries? What of those “long forgotten dock side guarantees”? If “only other Vets could understand,” them, it’s perhaps partly because the War Memorial provides scant background for the history they suffered.

Finally, context can offer depth to a study of the value of war as a political tool and as a nation building exercise. There are cases where a defensive campaign was/is arguably justified – the Pacific campaign in WWII strikes as one. But, there are many more which seem hollow, counter-productive causes, undertaken in the pursuit of vested interests, skewed ideology and/or simple bull-headedness. That’s not to say that nasty people shouldn’t be stopped. But is war always the answer? Is war a failure of preventative action and of the politics of peace and are the bigger lessons about these dynamics ignored? Have these failures actively provided the power vacuum for state thuggery, thus re-igniting the apparent need for war like a self-perpetuating disaster? The War Memorial is perhaps not the place to go if you’re moved to find out.

Ultimately, the War Memorial’s governance seems tilted towards management by the military. Eight of the thirteen-member governing council, including the Chair who is a Rear Admiral, are from a military background. Others include author and journalist Peter FitzSimons – whose books on Australia’s war involvement suggest military history is a cross between Boy’s Own and The Wiggles – and media owner Kerry Stokes. It shouldn’t surprise that context is not top of the list.

War tells many stories. Most are tragic. The War Memorial is not lax in noting the horrors. But, it is guilty of de-humanising them and packaging them so that they look distant and unreal. Their history has too many gaps, their reality is borderline fictional and the story they tell is incomplete. I’m not sure this story is truly reflective of the Australia we really are; it is rather a version of the one we are obliged to be.

With the centenary of WWI to be celebrated from next year, and with the 100 year mark since Gallipoli approaching in 2015, the War Memorial is going to front and centre of a look back over a century of war. It’s a shame the view will be so blinkered. Those who did sacrifice all in the fight for liberty, free speech and true democracy might have hoped for better. A Peace Memorial anyone?

ADMIN BY: Minister for Veteran’s Affairs

IF IT WAS A MOVIE, IT WOULD BE: Saving Private Ryan crossed with 40,000 Horsemen

SCORE ON THE FULFILLING-ITS-MISSION SCALE:  – 3/10

The author visited the Australian War Memorial as a guest of A.C.T Tourism 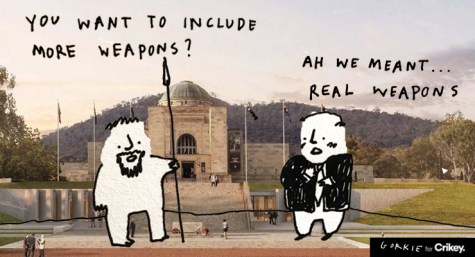