Egypt’s brief fling with democracy draws to a close

Egypt's brief experiment with democracy appears to be drawing to a close as the army tightens its grip on politics, and some turn to terrorism. 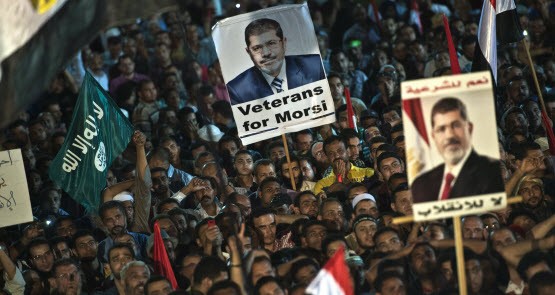 Egypt’s police were scheduled today to break up large sit-ins in Cairo and Giza, trying to end demonstrations intended to reinstate ousted president Mohamed Morsi. Should the police proceed, there was expected to be some confrontation. But more importantly, the dispersal may be seen as the final nail in the coffin of Egypt’s very brief experiment with democracy.

The army is now clearly determining Egypt’s political process, despite the fig leaf of installing a nominally civilian administration. This was to assuage the US and to entice the country to continue its military and financial support.

The Muslim Brotherhood’s decision to be included in the newest administration confirmed the fracturing of Egyptian political society. This fracturing has now created space for the rise of Islamist terrorism and, in response, the increasing political grip of the army.

In this environment, Egypt is unlikely to return to elections in the foreseeable future. And any such elections would probably be boycotted by the Muslim Brotherhood in any case. But the rise of political violence, in response, would rationalise the army’s seizure of effective political power and ensure that it retained a tight rein over the political process.

There was never any likelihood that the sit-in protests, which have attracted tens of thousands of supporters, would have seen Morsi returned to office. But while they have been tolerated, Egypt’s political tensions have been relatively contained.

The dispersal of the sit-ins would show Muslim Brotherhood supporters that not only is democracy in Egypt a sham but so is the legitimacy of public protest. In the face of declining options, the current political climate has led to a split within the Muslim Brotherhood, with more radical Islamist elements moving to embrace terrorism.

Confirming a move in this direction, at least 25 alleged members of the militant Ansar Bayt Al-Maqdis group were killed or injured in a helicopter attack in the northern Sinai on Saturday. The Egyptian army said the group had stockpiled weapons and been involved in recent attacks against army personnel.

The al-Qaeda-linked Ansar al-Sharia, which was responsible for last year’s attack on the US diplomatic post in Benghazi, Libya, has also said it was collecting weapons and recruiting militants for training in preparation for war in Egypt.

Winning Egypt’s presidential elections with a 3.4% margin in 2012, Morsi was the preferred candidate of a small majority of Egyptians. But facing an unholy coalition of liberals, supporters of the ousted dictatorial president Hosni Mubarak and the army, rather than pursue moderation, Morsi’s Freedom and Justice Party pushed an overtly Islamist political agenda.

Having little experience with democratic principles, including an inflexible religious-political agenda, Egypt’s fragile post-Mubarak politics was pushed to — and then over — the brink.

As a result, those Islamists who supported the experiment with representative democracy now see nowhere else to turn, while Islamists who never had faith in electoral politics have simply had their cynicism confirmed. With the army also having no commitment to democratic processes and Egypt’s liberals having sold out, we can expect the country’s dead democracy to be buried under increasing violence.

“The Muslim Brotherhood’s decision to be included in the newest administration confirmed the fracturing of Egyptian political society.”
I live in Egypt and I’m not aware of any such decision by the MB to participate in the interim administration. They have steadfastly refused even to negotiate with the military or civilian leadership. Many of their leaders are in detention or face warrants for their arrest.
In terms of terrorism, there has been little evidence to confirm links between the MB and these groups. They were operating in North Sinai long before Morsi was ousted. There is certainly a danger that more extreme elements of the MB might embrace terrorism if they continue to be excluded from the political sphere.

Is this the precis? – MB’s entry to administration opens space for terrorism, because MB would boycott elections thereby organised and resport to terrorism and then MB will schism…just so it is clear.