Campaign scorecard: Rudd has a suppository of a day

Bernard Keane, Crikey Canberra correspondent: While Suppositorygate (yes, I said that) took the headlines, the wash-up from the (non)debate and another good Newspoll for the Coalition made it Tony Abbott‘s day, giving the sense momentum is gathering for him, or at least for his hindquarters, while Kevin Rudd remains becalmed. However, Rudd’s canny late-debate pitch on same-s-x marriage may yet have some consequences; the issue is definitely not a vote changer, but the majority of Australians think it’s high time it was addressed, and Abbott is, as even his sister now agrees, hopelessly conflicted on the issue. Watch that particular space.

Dr Dennis Glover, veteran Labor speechwriter and a fellow of the Per Capita think-tank: It is difficult to give the points to Labor on a day when it was forced to replace its preselected candidate for Hotham mid-campaign. The insane factional nonsense that has been plaguing Labor for decades is now having a direct electoral cost, as they were warned it always would. In a tactical sense the points must go to the Liberals for muddying a close debate outcome with the “written notes” scandal. But of course back in the real world that sort of thing won’t change a vote.

Tim Wilson, policy director at the Institute of Public Affairs: No Australian cares that Rudd used notes, the real issue is that no one likes a cheat, and that is how using notes came across. From an opposition perspective, Andrew Robb got the tone right when he said Rudd wants an election about honesty, but then cheats. Rudd should have worn note-gate on the chin. Instead Rudd’s campaign then suggested Rudd didn’t use notes, then conceded he did, and then Rudd blamed his staff. The only saving grace for Rudd was Abbott’s “suppository” remark which was silly, funny and gave lefty tweeters something to laugh about, but also showed Abbott was human. Despite Abbott’s misuse of the word, Kevin Rudd had a suppository of a day, and Abbott was Monday’s clear winner.

Kevin Rudd: The Prime Minister began his day campaigning in Townsville, in the seat of Herbert, ahead of the release of the Pre-Election Economic and Fiscal Outlook (or PEFO). He visited a childcare centre and a barracks.

Tony Abbott: Starting his day in Melbourne before flying up to Sydney, the Opposition Leader is expected to highlight the issue of mobile coverage “black spots” today, while being pressed heavily by Labor and the press for his costings.

Christine Milne: The Greens leader is in Tasmania today, campaigning in Hobart.

Apparently the election is being held on World Beard Day, September 7, and The Courier-Mail has interviewed Gary Brudnell of the Gold Coast Facial Hair Club. He reckons: “There are no real men in politics, most of them are clean-shaven.” The GCFHC apparently thinks both leaders could do with a full Ned Kelly beard. The newspaper has obliged … 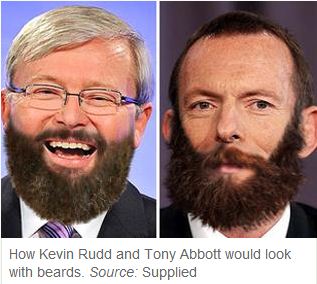 Greens leader Christine Milne showed that she’s not above getting her hands dirty in the brutal hack-and-slash world of politics by tweeting this picture of some flowers in anticipation of the release of PEFO. Rudd and Abbott never saw it coming … 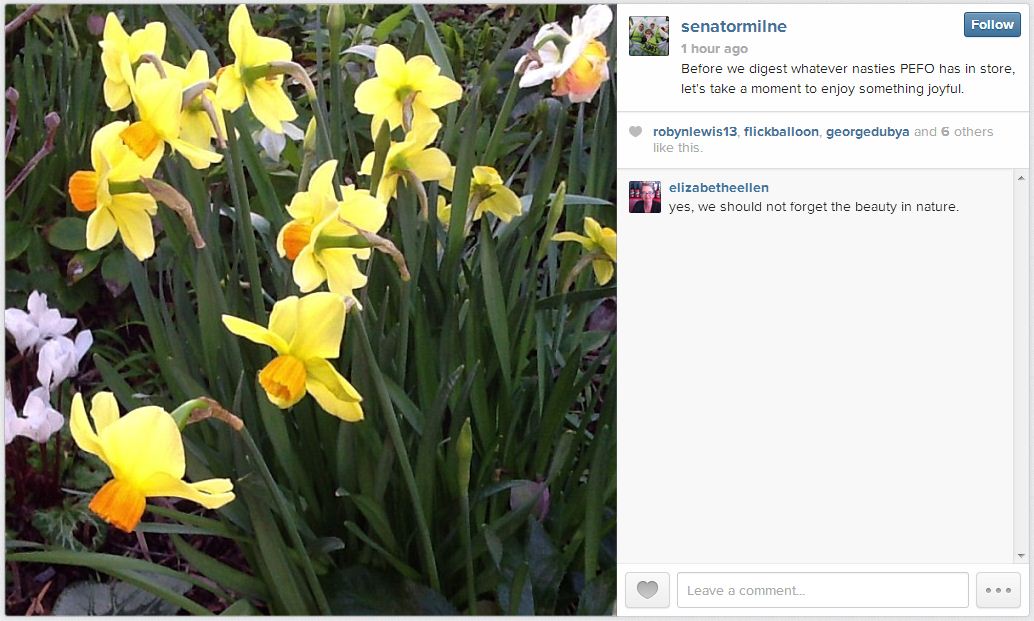 No matter how much hair anyone puts on the Rabbott’s face, it is impossible to mask the eyes of a fanatic.

Venise
I’ve been terrified of those eyes since I don’t know when. “Gunfighter’s eyes” I call them.

It’s instructive that on an occasion that the IPA could legitimately award the media cycle to Abbott in terms of the electoral contest, Tim can only speak about the most inane, trivial issue – the notes and “cheating”.

But the video on the web showed that Abbott was reading from notes too! He didn’t write more like Rudd did. So who cheated and who cares?

Will – no, no! You missed Wilson’s engagement with the, certified, even more trivial supposed suppository which “showed Abbott was human” (hmm, still unconvinced as to ‘if’, never mind ‘when’..).
After today’s ‘sexappealgate’, imagine how much more ‘human’ he’ll seem.