A show of hands

Crikey readers have questions about debate handshakes and questions the major parties should answer.

Questions from the debate …

John Falconer writes: Re. “Keane: The empty ritual of the modern political debate” (yesterday). In response to a very straightforward question, John Hewson responded in spectacularly fashion. He didn’t answer it! He equivocated. He had the both winning and both losing. His non answer was by far the longest given. Thank goodness he never made prime minister.

Vincent Burke writes: Am I imagining it?  Looking at your photo of the two leaders shaking hands, with its portrayal of the aggressive stance and stare by Abbot, was starkly reminiscent of the aggressive handshake Latham inflicted on Howard. 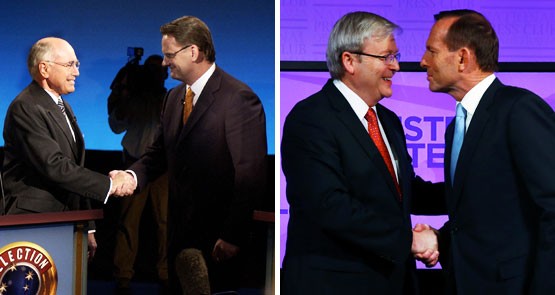 Niall Clugston writes: Well, it would be interesting if the leaders actually debated, but only a tiny minority of the electorate would actually notice.  And if anyone seriously cast their vote based on a televised puppet show like that it would be hardly different from a donkey vote.

… and questions for Labor

I’m sure I’m not alone in agreeing that there are questions that both our would-be PM’s and their senior people need asking; I’m not so sure Tone’s office has quite nailed them, for me at least, though. So I propose Crikey (or Crikey readers, through comments such as this) flesh out our own list of pearlers for the pollies. Time-poor reporters, looking for a change of subject or an off the cuff zinger? Let Crikey’s politically aware audience give you a tip.

My question; Uranium mining. The Labor Party platform  has dropped the “no new mines” policy in favour of promises to be nice to the environment and similar “don’t scare the horses”-type language, while the Liberals (nationally, at least) are a blank slate on the issue — unless it falls within the remit of “creating a green army”. Given that at least one state premier (Colin Barnett in WA) is falling over himself to appease the uranium mining lobby, how long will it be, if you are elected, before we see new uranium mines opening up?

hmmm, not sure the Howard/Latham gentlemanly handshake image is the one being referred to.
Suspect this one is the one we’re all thinking of!